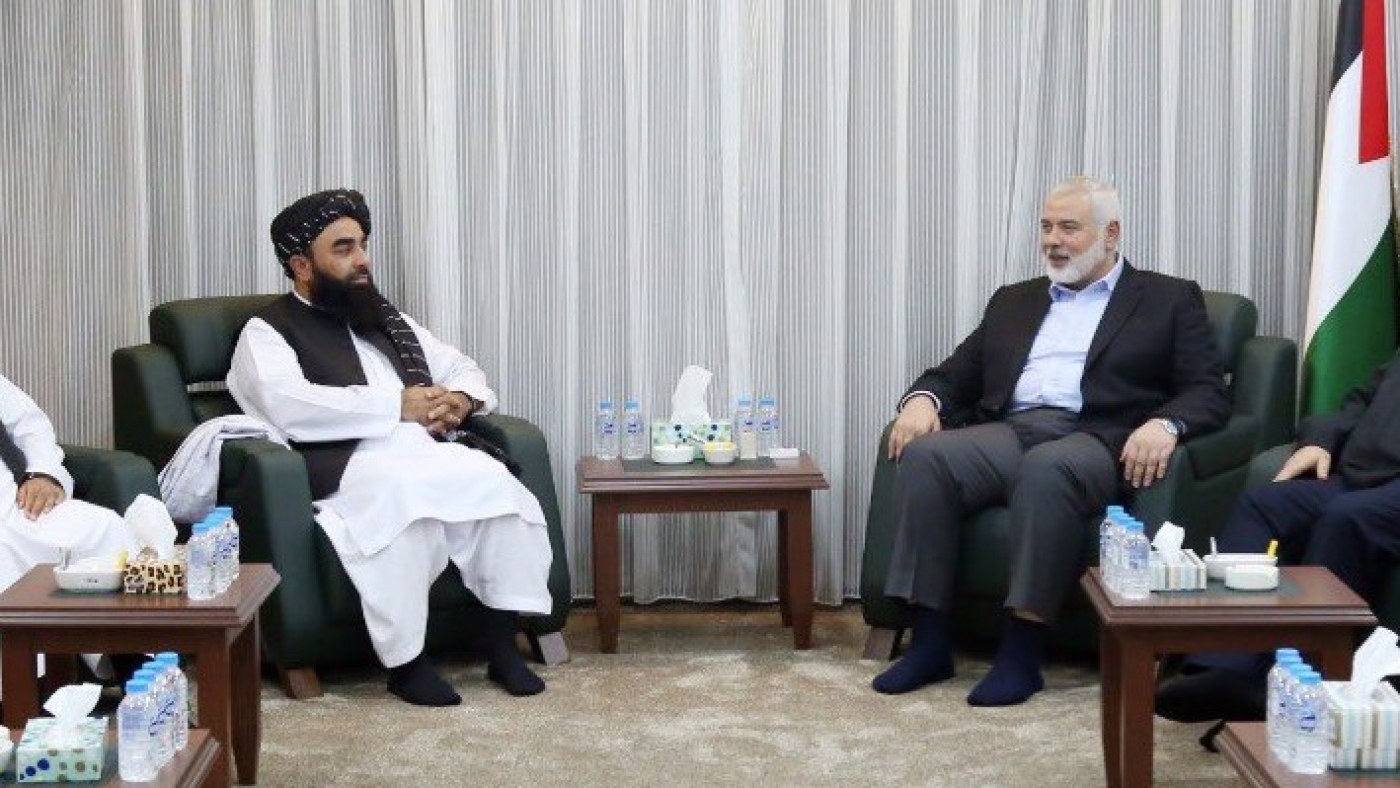 After having to distance itself from Israel normalisation rumours, the Afghan group draws parallels between two occupations

Earlier this week, Taliban government spokesman Zabihullah Mujahid tweeted a picture of him meeting with Hamas leaders in Istanbul. In the tweet, Mujahid said that he discussed issues of Afghanistan and Palestine, including the status of Al-Aqsa Mosque, with a delegation that included Ismail Haniyeh, Hamas’s political chief.

Mujahid has been in Turkey for more than one week now, where he has been attending a conference of Islamic scholars and meeting with Afghan business owners, whom he hopes to convince to invest back in their cash-strapped home country.

Though Ankara does not yet officially recognise the Taliban’s Islamic Emirate as the government of Afghanistan, Turkey has maintained ties with the Taliban that date back to when they were an armed opposition movement fighting the former western-backed Islamic Republic administration.

However, the news of Mujahid’s meeting with Haniyeh has caught experts in Afghanistan and the Middle East by surprise.

Still, Haniyeh has expressed his apparent support of the Taliban in the past. Shortly after the group returned to power in August 2021, the Hamas leader shared details of a phone call he had with senior Taliban official Abdul Ghani Baradar.

‘Being associated with the Palestinian cause, and gaining the endorsement and support of Palestinian leaders, could help improve the Taliban’s standing in the Muslim world’

In his congratulatory phone call, Haniyeh said that the end of the western occupation of Afghanistan was “a prelude to the demise of all occupation forces, foremost of which is the Israeli occupation of Palestine”.

The following October, Haniyeh had a similar phone call with the Taliban’s acting foreign minister, Amir Muttaqi. In that conversation, Haniyeh urged the Islamic Emirate to keep “Palestine present in the speeches of the Afghan foreign ministry, especially Jerusalem and the ongoing [Israeli] violations there”.

Haroun Rahimi, an Afghan academic and author currently based in the US, said the most recent in-person meeting could be a part of the Taliban’s efforts to secure some sort of international recognition, and that standing with Palestine would send a very specific message.

“The Taliban is trying to tap into the anti-imperialist and anti-western sentiment amongst [some] Muslims as a way to put pressure on other Muslim leaders,” Rahimi told Middle East Eye.

Rahimi said Mujahid’s face-to-face meeting with Haniyeh is also important for its symbolism: “Being associated with the Palestinian cause, and gaining the endorsement and support of Palestinian leaders, could help improve the Taliban’s standing in the Muslim world.”

The Taliban may also be seeking to link Afghanistan and Palestine as two occupied countries, as Haniyeh had done.

“The Taliban also saw Afghanistan as being occupied by western powers, and would like to portray themselves as the freedom fighters who have freed the country from American imperialism,” Rahimi said, an idea he believes the Taliban could use in an effort to bolster support among other Muslim communities.

Ultimately, though, Rahimi said the Taliban is still very much driven by its desire to be seen as the legitimate government of Afghanistan, which was also likely a factor in Mujahid’s decision to meet with the Hamas leaders.

“The Taliban wants to have as much diplomatic activities as possible and having interactions with Palestine also makes ideological sense for [the group],” Rahimi said.

‘What problem do we have with Israel?’

Authorities in Afghanistan have repeatedly expressed support for the Palestinian cause over the past 20 years.

In 2019, Afghanistan’s then ambassador to Turkey donated $1m in aid to Palestinian refugees, following on from $500,000 given to the people of Gaza five years earlier.

The Afghan senate denounced Israel’s war on Gaza in 2014, and the western-backed government also criticised the 2021 Israeli attacks on worshippers and civilians at Al-Aqsa Mosque.

The Taliban, meanwhile, has even had to distance itself from Israel.

In August, Taliban spokesman Muhammad Naeem came under criticism when he refused to rule out ties with Israel during an appearance on Al Jazeera Arabic. When asked if the Islamic Emirate would be willing to engage with Israel, Naeem said the Taliban was open to relations with anyone who was receptive to the idea.

“What problem do we have with Israel? Next thing someone will ask whether we are willing to have a dialogue with Mars,” he said during the appearance. However, Naeem soon retracted his statement, saying his words had been misinterpreted.

Earlier this month, Mujahid criticised an Afghan media report claiming the Islamic Emirate was looking to establish ties with Israel as “fake news”.

Afghanistan: Taliban uses Hamas meeting to send a message to the Muslim world10.29.2022