The Afghanistan Peace Campaign’s website is updated daily with news from and about Afghanistan and important analytical articles. The website also archives important documents and has links to activist groups, think tanks and organizations carrying out humanitarian aid and conflict resolution programs on the ground in Afghanistan.

Influence public opinion with op-ed articles, television and radio interviews and extensive use of social media.

The Afghanistan Peace Campaign’s principal implementers, Bill Goodfellow and Shukria Dellawar, have been widely published in the United States and Europe. They write op-ed articles and provide press interviews.

Staff work closely with U.S. activist groups, especially Without War, America’s largest anti-war coalition. Win Without War has been an effective critic of America’s wars in the greater Middle East and north Africa. Win Without War is able to reach millions of activists through it 38 national organizations, from MoveOn.org to the Sierra Club and the National Council of Churches.

We also work with the Friends Committee on National Legislation, the influential Quaker lobby on Capitol Hill. As well, we coordinate our work with the Institute for Policy Studies and with veterans’ groups that have opposed the war in Afghanistan.

Meetings with executive branch officials and members of Congress.

Goodfellow and Dellawar have spent many years establishing contacts with congressional staffers and members of Congress. They also have good contacts with Foreign Service Officers and political appointees in the State Department.

The Biden administration is going to need the support of members of Congress to engage with the new Afghan government. In the case of Vietnam, then-President Bill Clinton could not have normalized relations in 1995 without the support of Senator John McCain and Senator John Kerry, both of whom had served in Vietnam and had real credibility with their congressional colleagues. President Biden is going to need members of Congress to step up and make the case for engagement, for already many Republicans members are insisting that the United States have nothing to do with the new government.

In 1976, Goodfellow and his colleagues at the Center for International Policy established the Indochina Project, a special program to build public support for normalization of relations with Vietnam and, later, Cambodia. The Indochina Project staff included academics, journalists and activists who took delegations to southeast Asia and wrote dozens of articles and reports every year.

The key to the Center for International Policy’s team’s effectiveness was collaboration with dozens of activists groups in the United States, a partnership with allies in the Senate and House. We believe the Afghanistan Peace Campaign can replicate a similar, highly effective collaboration between government officials and NGO activists in Afghanistan and activists and congressional staff in Washington.

Outreach to peace groups in Europe and Japan.

Goodfellow and Dellawar have long-standing contacts with European peace groups. They have traveled to the UK, France and Norway to meet with key activist groups and also with government officials. They will encourage activists to press their governments to support engagement with the new Afghan government. In addition to writing op-ed articles for U.S. publications, campaign staff have written articles for European and Japanese publications. 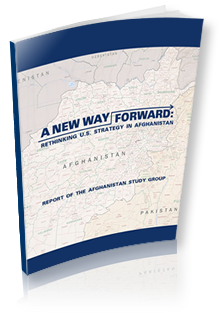 The Afghanistan Study Group published a landmark report in August 2010, “A New Way Forward: Rethinking U.S. Strategy in Afghanistan.” The final report was signed by over 50 widely-respected foreign policy professionals and received extensive press coverage in the United States, Europe and in Afghanistan. Signers concluded that the policy the Obama administration was following in 2010 was destined to fail. A decade later, this prediction has been borne out.

The Afghan Study Group’s report and all the attendant press attention failed to reverse U.S. policy because the Obama administration and America’s NATO allies still believed that it was possible to defeat the Taliban, or at least degrade their ability to carry on the fight and force them to accept the terms being offered by the government of President Hamid Karzai.