Immediately after storming to power in Afghanistan last August, the Taliban renewed their assault on the country’s rich pre-Islamic heritage by looting archeological treasures in Bamiyan province, in Afghanistan’s central highlands. They zeroed in on the site of the giant Buddhas that, in the Taliban’s first incarnation two decades ago, became an international symbol of the group’s depravity as it declared the 1,400-year-old statues “idolatrous” before proceeding to dynamite them.

One of the men behind one of history’s most heinous cultural crimes was Mullah Abdullah Sarhadi, now the Taliban’s de facto governor of Bamiyan province. Since the Taliban’s return, he has been overseeing the plunder of protected Buddhist antiquities, according to archaeologists and experts with knowledge of destructive activity. He is also implicated in the massacre of Hazaras, who regard Bamiyan as their homeland, dating back to the last time the Taliban ruled, from 1996-2001.

“The looting and destruction, and the construction of some new commercial buildings at the cultural heritage sites began in the days after the Taliban takeover” on Aug. 15 of last year, said Ali Folladwand, a Hazara activist now living in exile who launched a global campaign with the Twitter hashtag #SaveBamiyanHistoricalHeritage.

“We want UNESCO, and other organizations and the countries that really care about world heritage sites to press the Taliban in any way possible to save the cultural heritage of Bamiyan,” Folladwand said. “At the very least, the world should prevent more destruction.”

The Taliban aren’t just blowing up Buddhas and robbing caves. They are assaulting the Hazara people, Shiites who account for about 10 percent of Afghanistan’s population of an estimated 38 million and regard themselves as guardians of the region’s heritage.

Thousands of Hazaras were killed in Bamiyan and elsewhere in the country after the Taliban took power after the civil war in 1996, and many say that a “genocide” dating back to the late 19th century under King Abdur Rahman Khan continues. Folladwand, who was studying medicine until last August and now lives in exile, said the destruction of Bamiyan’s heritage is part of the Taliban’s “cultural cleansing” policy toward Hazaras, who they regard as apostate. In recent years, Hazaras have been killed in their homes, schools, and mosques, though since the Taliban retook control those atrocities have been increasingly claimed by their rival terrorist group, the local Islamic State branch known as Islamic State-Khorasan.

“The physical destruction of heritage gives the Taliban the power to reject the Hazara, classify them as unimportant and erase them for the future generations,” Folladwand said.

Once the Taliban were back in power, they went straight back to dismantling and looting the historic sites. Locals said that Sarhadi brought in non-Afghans to do much of the excavation and looting. The Art Newspaper reported that at least two sites around the giant Buddha niches were excavated, including some caves that had never been opened before. It is impossible to know what they might have held and what, if anything, was taken. Taliban spokesmen didn’t respond to requests for comment, though some sources said Sarhadi had been ordered by Taliban officials in Kabul to cease the unilateral excavation.

The Taliban are simply going back to the scene of the crime. A former UNESCO official, who spoke on condition that he not be identified for the safety of family still in Afghanistan, said Taliban figures involved in the 2001 destruction of the Buddhas, known as Salsal and Shahmama, also looted many artifacts while outside demolition experts prepared the Buddhas for destruction.

“They looted and sold many of the treasures and artifacts of Bamiyan on the black market, and now [Sarhadi] is back to complete his mission,” the former UNESCO official said. “They have started excavating very specific areas around the historical sites of Bamiyan.”

Multiple sources said Sarhadi has been looking for treasures similar to the priceless gold jewelry that was unearthed from six nomadic tombs in northern Afghanistan in the late 1970s. Known as the Bactrian Hoard, the trove dates back 2,000 years and includes a 5-inch hammered-gold folding crown, as well as jeweled daggers, cupids, dolphins, sheep, dragons, and gods. The variety of objects attests to the trade connections stretching over 5,000 miles from the Mediterranean to China between 2200 B.C. and A.D. 200.

The first time the Taliban hordes invaded, the treasures were kept safe by the head of the National Museum of Afghanistan, Omara Khan Massoudi—until 2004. Part of the collection then toured museums worldwide. Last thought to be in the presidential palace in Kabul, its whereabouts are currently unknown; the Taliban say they are looking for it.

The Bamiyan Valley is classified by UNESCO as an endangered world heritage site “of importance for humanity as a whole.” After the Taliban takeover on Aug. 15, UNESCO called for the region to be protected from damage and looting, but with a minimal presence on the ground it is difficult to know how the agency can keep an eye on the country’s important monuments. And the Taliban’s promises don’t convince many.

“My concern is that they were initially quite good on other subjects too, such as girls’ schools and women’s dress code. They issued some very flexible and tolerant statements initially, but since then, either because they feel more confident or because the hardliners are gaining the upper hand within the organization, they have slipped back into their former ways,” said Cheryl Benard, president of U.S.-based Alliance for the Restoration of Cultural Heritage. “My fear is that the same could happen with cultural heritage.” 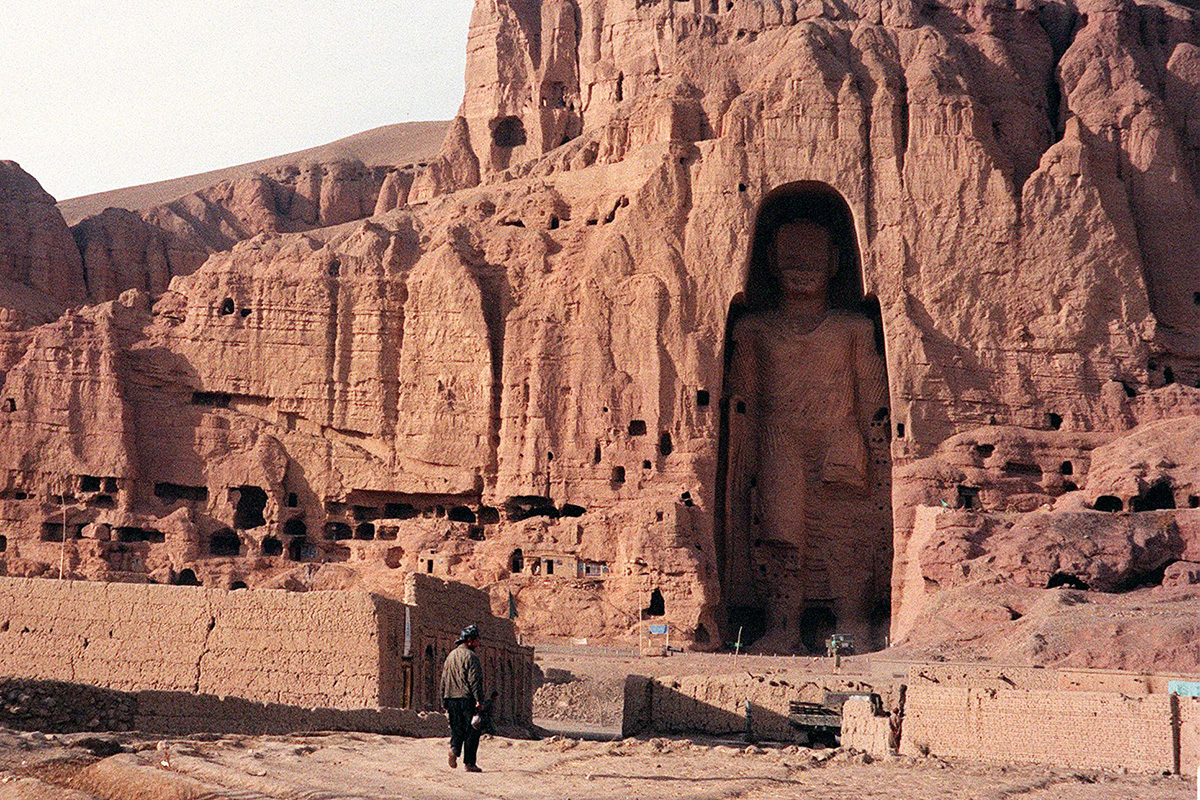 This photo from December 1997 shows a statue of Buddha in Afghanistan’s Bamiyan province before it was destroyed by the Taliban.JEAN-CLAUDE CHAPON/AFP VIA GETTY IMAGES

Salsal and Shahmama were carved into the cliff face just outside the sleepy provincial capital, also known as Bamiyan. They stood at the center of a vast network of caves that formed a complex of monasteries and chapels, many decorated with exquisite painted murals. Not far outside the city are the remains of Shahr-e Gholghola, which was a major stop on the Silk Road caravan route between India and China in the sixth to 10th centuries. It’s an irreplaceable example of first-millennium Gandharan art, incorporating, as UNESCO said, the “interchange of Indian, Hellenistic, Roman, Sasanian and Islamic influences.”

Across Afghanistan, the remnants of Buddhist heritage testify to Afghanistan’s geographical importance to the spread of Buddhism from India to China, Japan, and Korea. Just outside Kabul is Mes Aynak, an approximately 2,000-year-old Buddhist city built on a massive copper deposit that was exploited for centuries by monks who discovered it on their way from the subcontinent to the Far East.

Elsewhere, the 12th-century Minaret of Jam in Ghor province, also a UNESCO World Heritage Site, was overrun by the Taliban in May 2019, when they barred access to the site and killed more than a dozen guards.

Archaeologist sources said the Taliban believe cultural sites are a potential source of jobs in a country where economic activity has ground to a halt and around half the population doesn’t have enough to eat. “But they don’t know what they are doing, lack any real knowledge of the importance of these sites, think that anything they dig up has a monetary value, so they need some monitoring from professionals, and it is unclear how open they are to that,” said one European expert, speaking on condition of anonymity.

The Taliban notoriously have little regard for anything but their own strict interpretation of Islam, and the destruction of Bamiyan’s Buddhas was a high-profile act of cultural destruction that laid bare the brutality of their initial five-year rule, which ended eight months later with a U.S.-led invasion in retaliation for their collusion in the 9/11 terrorist attacks on New York and Washington.

Back in Bamiyan, where Salsal and Shahmama once stood, there are simply two gaping scars on the cliff face. Over the two decades following their destruction, Afghan and international experts worked to preserve and protect the Gandharan and Buddhist sites of Bamiyan. UNESCO, Japan, and South Korea poured millions of dollars into a vain attempt to protect Bamiyan’s treasures. Little more could they do with the caves, which have been defaced, damaged, or destroyed, irreversibly ruining historic murals. Some caves now house poor residents of the province, who use batteries to power lights and stoves. Some are schools for the cave dwellers’ children. Some are occupied by people with drug addictions.

The region has been dug over and looted for millennia, and many experts believe that there could be little of value left to be found. Like the empty niches where the Buddhas once stood overlooking Bamiyan’s wheat fields, much of Afghanistan’s cultural heritage could soon be consigned to memory.

Lynne O’Donnell is a columnist at Foreign Policy and an Australian journalist and author. She was the Afghanistan bureau chief for Agence France-Presse and the Associated Press between 2009 and 2017.