Afghanistan Peace Campaign
Al Jazeera
Pakistan’s alleged air raids inside Afghanistan in response to the killing of its soldiers have raised tensions between the South Asian neighbours.

Tensions are high between Pakistan and Afghanistan over cross-border attacks, with Islamabad accusing Kabul of doing little to stop attacks that have increased since the Taliban came to power last August.

Pakistan says its security forces are being targeted from across the border in Afghanistan. Pakistan Taliban, known by the acronym TTP (Tahreek-e-Taliban Pakistan), and ISIL (ISIS) affiliated fighters, who operate along the porous border between the two countries have carried out numerous attacks inside Pakistan since 2007.

In 2014, the group attacked a school in Peshawar, killing 150 people, mostly children, in one of its deadliest attacks in the country.

The Taliban warned Islamabad of “consequences” saying it would not tolerate “invasions” from its neighbours after nearly 50 people were killed on April 16 in alleged Pakistani air raids in the border provinces of Kunar and Khost. Pakistan has not confirmed if it was behind the air raids.

The Taliban’s return to power in Afghanistan was celebrated by officials in Islamabad and it was hoped that the armed group would rein in TTP and ISIL fighters, but instead attacks have risen. More attacks have been recorded this year than in the same period last year.

The alleged Pakistani air raids sparked protests, with residents in Afghanistan’s Khost and Kandahar provinces taking to the streets saying those killed in the attacks were civilians. 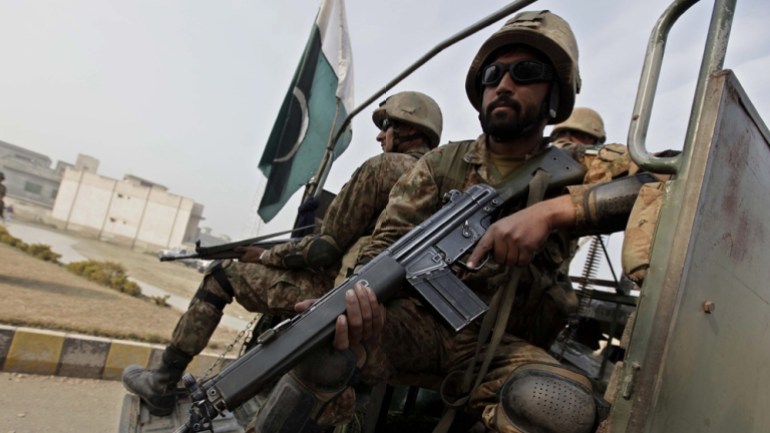 Pakistan says its security forces are being targeted from across the border in Afghanistan [File: Arshad Arbab/EPA]

Imtiaz Gul, a political analyst based in Islamabad, said Pakistan has long complained against “terrorist outfits operating in eastern Afghanistan”.

He said Pakistan has carried out attacks against “terrorist hideouts” even during the time of former President Ashraf Ghani. “They [rebels] were also targeted by US-led drone strikes,” he told Al Jazeera.

“Terrorists are using Afghan soil with impunity to carry out activities inside Pakistan,” Pakistan’s foreign office said in a statement last Sunday.

But Taliban authorities have denied providing safe haven to the rebels, saying they have checked cross-border attacks since coming to power last August.

“There was a lot of expectation when the Taliban came to power amid hope that the group will extend a lot of support to Pakistan in countering terrorism,” said Amir Rana, director of Pakistan Institute for Peace Studies (PIPS), pointing out three threats: first the TTP, the second Islamic State in Khorasan Province (ISKP or ISIS-K), and the third Baloch fighters who use hideouts in Afghanistan.

According to PIPS, the Pakistan Taliban was responsible for 87 attacks across Pakistan in 2021, with most attacks targeting military personnel within its western borders.

From January to March this year, 97 Pakistani soldiers and officers have been killed in “terrorist attacks”, according to the Pakistani military.

Last week, a Pakistani military convoy was ambushed close to the border in North Waziristan, killing seven soldiers and four attackers in a gun battle. It was claimed by the Pakistan Taliban. On Saturday four Pakistani soldiers were killed in firing from across the border.

The TTP and Taliban are believed to share ideological roots and have previously also participated together in attacks against the United States-led Afghan government. But they maintain separate operation and command structures.

Last November, the Taliban mediated a ceasefire deal between the Pakistani government and the Pakistan Taliban but that did not last. Pakistan Taliban unilaterally ended the truce accusing Islamabad of reneging on its promises. Its main demands are the imposition of Islamic law in Pakistan and the release of its fighters.

Faiz Zaland, a professor at Kabul University, says it is unlikely the Taliban will act against the Pakistan Taliban considering they fought together for the past 20 years against the US-led NATO forces.

“The fighters have sacrificed their lives together like brothers against the US-led occupation in Kabul,” he told Al Jazeera.

Taliban has, however, maintained that it will not allow Afghan soil to be used against Pakistan. Officials from the group, however, did not respond to requests for comment on the matter.

But Zabihullah Mujahid, the Taliban government’s spokesman, issued a statement condemning the air raids saying that “it is paving the way for enmity between Afghanistan and Pakistan”.

The recent air raids also added to the growing Taliban anger against Pakistan for building a 2,700km (1,677 miles) fence along the countries’ border, known as the Durand Line.

Tensions come despite Pakistan repeatedly appealing for the recognition of the Taliban administration which faces diplomatic isolation.

Obaidullah Baheer, a lecturer at the American University of Afghanistan, said, “Pakistan’s administration expects the Taliban to have the same level of subservience the Taliban showed in the 90s, and as the group is trying to shed away the stamp of being Pakistan’s proxy, it leads to the Taliban taking a tough stance at times.”

The recent spat, Rana from PIPS said, will likely affect the “already-tense relationship” even in the bilateral front between the two neighbours. Pakistan is Afghanistan’s biggest trading partner.

However, analysts say the group does not have enough resources to retaliate against its nuclear-armed neighbour.

“It is hard to imagine that the Taliban will take any strong actions against Pakistan. Even if they want to, they lack the capacity and resources,” said Said Sabir Ibrahimi, a non-resident fellow at New York University’s Center on International Cooperation.

The air raids come days after Shehbaz Sharif was sworn in as the prime minister after Imran Khan was removed following a no-confidence motion.

But analysts say Pakistan’s powerful military, which was accused of providing a safe haven to Taliban leaders in the past, dictates the country’s Afghan policies. It has increased border operations in recent months.

Baheer from the American University of Afghanistan said the reason the Pakistani government is yet to claim the attack in Afghanistan could be “so that they do not risk a complete fracture of ties with the Taliban and leave them some face-saving by not claiming it, which would demand justifying it as well”.
SOURCE: AL JAZEERA
Deadly border attacks test Pakistani gov’t relations with Taliban04.28.2022