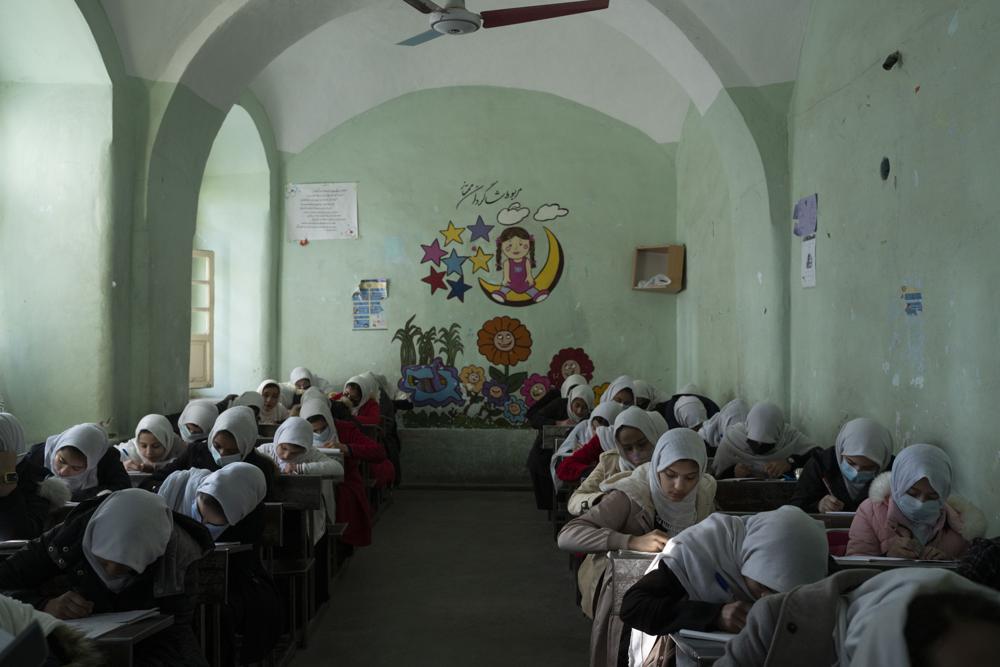 FILE – Afghan girls participate a lesson inside a classroom at Tajrobawai Girls High School, in Herat, Afghanistan, Nov. 25, 2021. Taliban hard-liners are turning back the clock in Afghanistan with a flurry of repressive edicts over the past days that hark back to their harsh rule from the late 1990s. Girls have been banned from going to school beyond the sixth grade, women are turned back from boarding planes if they travel unaccompanied by a male relative. (AP Photo/Petros Giannakouris, File)

KABUL, Afghanistan (AP) — A Danish aid group was able to keep its Afghan women employees working even after the Taliban takeover of the country last August, the chief of the nongovernmental organization said Tuesday.

Charlotte Slente, secretary general of the Danish Refugee Council, told The Associated Press that without the group’s female staff, the NGO would not be able to reach half the population of Afghanistan.

The aid group, which provides assistance to more than 1 million Afghans, was particularly proud of its achievements, Slente said, speaking during a visit to the Afghan capital, Kabul.

“We’ve been working in a very principled manner since August to ensure that our female staff can continue working and go to work,” she said.

“We need female staff as part of our team in order to be able to reach female beneficiaries” of the aid, Slente added. “Without female staff, we cannot reach half of the population.”

In Kabul, Slente was assessing the growing humanitarian crisis in the country; she also met with Afghanistan’s new Taliban rulers.

Since the Taliban takeover, aid for development stopped and a budget that was 80% provided by international donors came to a halt. Now, about 95% of Afghans do not have enough to eat, according to the United Nations and the economy is in free fall. People can withdraw a maximum of $200 every two weeks from their banks.

Slente said she pressed in her talks with Taliban officials the need for girls to go to school beyond the sixth grade — a promise the Taliban reneged on last month. They have also issued harsh edicts, including banning women from traveling on planes unaccompanied by a male relative — just one of several restrictive measures the Taliban have implemented that hark back to their harsh rule of the late 1990s.

The Taliban listened to Slente, she said, and while they made no promises on women’s access to education and the workforce, they assured her that the Danish Refugee Council would have free access to all members of the Afghan society.