By Thomas Gibbons-Neff and Yaqoob Akbary

Thomas is the Kabul bureau chief. In December, he and Yaqoob, a reporter, traveled the highway from Kabul to Kandahar and made a pit stop at a small shop that’s part of a much bigger story.

ALONG HIGHWAY 1, Afghanistan — The Bomb Crater Stop ’N’ Go is not the actual name of this shop along a desolate stretch of highway in rural Afghanistan. But that’s what it is: a small shed that sells fuel and snacks to passing travelers, right beside a scar in the earth where road and sand meet after an explosion there sometime in the last 20 years of the country’s violent history.

Hafiz Qadim, the 32-year-old shopkeeper, occasional gas attendant and snack dispenser, has no formal name for his business venture. It sits like a lone beacon of essential provisions among the sand dunes, rock outcroppings and occasional grape fields on the border of Kandahar and Zabul provinces in Afghanistan’s south, where the surrounding mountains cut through the sky like the backs of sleeping dinosaurs.

It is the only store for miles.

“I opened this shop after Kabul fell,” Mr. Qadim explained, gesturing toward his new steel roller door and the mud bricks that looked like they were still drying in the sun.

That was in August, when the capital was seized by the Taliban, consolidating their control of the country.

While Mr. Qadim is the sole owner, the crater is his de facto silent partner: Its very size forces cars, trucks and buses to slow down enough for their drivers and passengers to notice through their smudged windows what’s for sale. Some keep going, but plenty seize the chance to break for a fuel top up or a selection of rainbow colored energy drinks, bottles of shampoo, pairs of black loafers, assorted biscuits, canned foods, chips or a soda.

The odd pairing — Mr. Qadim’s shop and this propitious, outsized pothole — are physical manifestations of both Afghanistan’s very long war and its end.

There is peace now, or at least some version of it that includes the threat of the Islamic State and the fledgling resistance forces arrayed against the Taliban. The highway is quiet enough for new shops like Mr. Qadim’s and for farmers’ fields that can be hoed all the way up to the highway’s edge without fear of being shelled or shot.

But at what cost, this chance for commerce where there had been none for decades?

Mr. Qadim knows the answer because he is surrounded by the price he and so many others have paid. He’s reminded of it every day when he comes to work early in the morning and walks across the highway to his home every night. A half mile to the south — where, in the afternoon, rays of sun cut through its looted fortifications — is the abandoned hilltop police outpost where a firefight killed three members of his family.

Thirteen years ago, when Mr. Qadim was still a teenager, the Western-backed forces of Afghanistan’s government and the Taliban fought bitterly for the road his shop sits beside. In one of those gun battles near the police outpost, his mother, father and one of his sisters were killed.

“About 200 people living along on this road were martyred during the war,” Mr. Qadim said bitterly.

He left his family home soon after, one of the millions of the long war’s internally displaced people who were uprooted by the violence in rural areas and forced into the more secure cities. Zabul Province, where Mr. Qadim lives, was once one of the most violent of the entire conflict.

From there he built a life in Kabul, with stays also in the cities of Kandahar and Herat, bastions of safety as the war ebbed and flowed across the country. 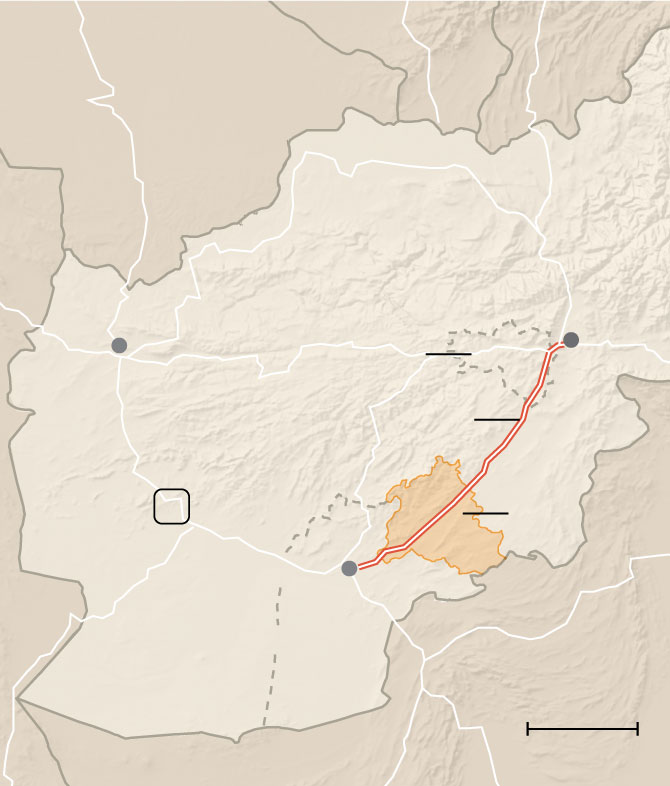 He eventually became a truck driver for seven years, shuttling livestock, fruit and wood countless times down the same highway that he now works beside: the 300-mile stretch of road, once deemed the most dangerous in the country, that connects its two largest cities, Kandahar and Kabul.

Others are also finding new work by the road, now that traffic accidents pose a greater risk than being caught in a crossfire.

A few miles north of the store, Nur Ahmad, 18, and other grape farmers are planting their crops at the edge of the highway, once too dangerous for any agriculture.

Planting right up against a busy road is not ideal, but in Afghanistan there is only so much arable land. Every square foot counts, especially with the country hampered by one of the worst droughts in decades, leaving many fields parched and their wells dry.

“I was jobless so I came here,” Mr. Ahmad said, his shovel striking the dirt between sentences.

A half-day’s drive from the young grape farmer, among snow-capped mountains and the potato fields of Wardak Province, Wahdat, 12, and his younger brother sifted through the ruins of another old military outpost along the same highway. Their family of five is reeling from the year’s poor harvest. More than half of Afghanistan’s population is currently not eating enough, according to the World Food Program.

“We are hungry,” Wahdat said.

With his hands dirty and the shovel almost bigger than him, he had set out on that day’s quest to peel the metal netting from a few remaining barricades at the outpost to use to build a chicken coop for his family’s eight chickens.

Wahdat doesn’t remember when the outpost he was disassembling was built, who occupied it or when it was abandoned. He just knew that at one point in his short life he was told not to go near it. And now he could.

The reminders of violence and the war are everywhere along the highway: shell-raked buildings, destroyed bridges, the twisted hulks of vehicles and the abandoned remains of those outposts that had provoked hourslong firefights and retaliatory airstrikes. But by far, the most common cues that war had raged here for years are the bomb craters.

Some are deep. Some are shallow. Some you can drive through and some you have to veer into oncoming traffic or even pull into a ditch to avoid. They snap axles and pop tires. Sometimes children will try to fill them with dirt, earning donations from passing drivers, only to take the dirt out and repeat the cash grab scheme the next day.

The Bomb Crater Stop ’N’ Go depends on its adjacent crater as much as a store elsewhere in the world might need convenient parking or inflatable advertising.

“I can build a shop anywhere on this land,” Mr. Qadim said, gesturing at the expanse of highway in either direction. “But if it is close to this plot,” he said, pointing to the hole, “it is good.”

A moped pulled up, blasting music (heavily discouraged by the Taliban), and the driver paid him back for a few liters of fuel that he had taken the other day.

Mr. Qadim doesn’t remember when the bomb went off that made his hole in the road. Or, rather, bombs: Several blasts occurred at this spot, next to a culvert.

Road culverts and roadside bombs went hand in hand during the war because the shallow ditches and drainage pipes made hiding the explosives there easier for the Taliban. And the nearby outpost only increased the attractiveness of this target.

But now the culvert was just a culvert, the bomb crater just a pothole, and unlike so many of his fellow countrymen who are grappling with an economic crisis, Mr. Qadim was making more money than he had in his entire life: roughly $100 a month.

Thanks to that mile marker of violence, the Bomb Crater Stop N’ Go has found a niche market in the middle of nowhere: some gas, some victuals and maybe a few bars of soaps for those who traveled along a road that was slowly coming back to life.

Thomas Gibbons-Neff is the Kabul bureau chief and a former Marine infantryman.

A Bomb Crater as Business Partner for a Pit Stop on an Afghan Highway03.26.2022