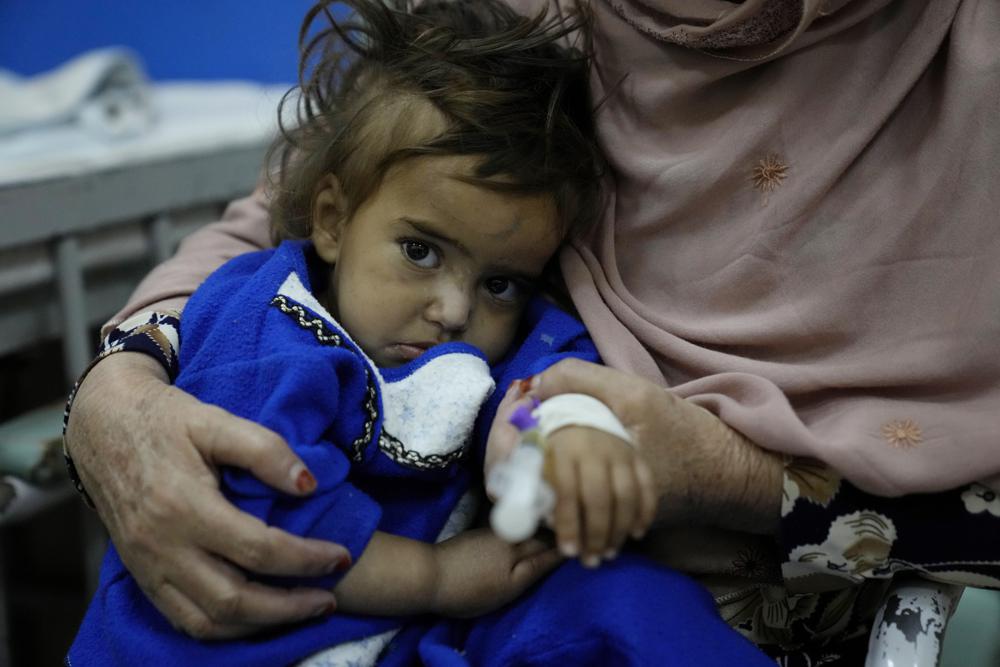 An Afghan woman holds her sick granddaughter, where she undergoes treatment in the malnutrition ward of the Indira Gandhi Children’s Hospital, in Kabul, Afghanistan, Thursday, Feb. 24, 2022. The United Nations, along with international organizations face mounting challenges to address a growing humanitarian crisis in Afghanistan. According to U.N. projections for 2022, over 1 million children will need treatment for malnutrition and up to 97% of Afghans could be living below the poverty line. (AP Photo/Hussein Malla)

KABUL, Afghanistan (AP) — The Taliban are showing “commitment” to allowing Afghan girls to go to school across the country next month, addressing a key condition set by the international community, UNICEF’s newly appointed chief said on Friday.

UNICEF Executive Director Catherine Russell said it remains to be seen whether the Taliban’s commitment to reopening schools to girls and women on March 21 might hinge on more conditions or restrictions.

“The de-facto (Taliban) authorities have given us indications that that is their intention, and we are hopeful that is going to happen, and we believe it should happen,” Russell, who was appointed earlier this month, said in an exclusive interview with The Associated Press in the capital of Kabul.

Despite the lack of a formal ban, girls grade seven and up have effectively been barred from going to school in most of the country since the Taliban’s takeover of the country six months ago. Access to education is a key demand of the international community, and the Taliban have blamed delays on lack of adequate space, especially in cities, to accommodate segregated schooling.

Schools in about 10 provinces have continued uninterrupted since the Taliban takeover and private universities and schools in the capital remained open. Universities for women have also restarted in several provinces with the Taliban promising all universities will do so eventually in the coming weeks.

Apart from reassurances that schools will re-open for all girls, little else has been made public about other possible restrictions or curriculum changes. These are “a little bit of a work in progress,” Russell said.

With Afghanistan as her first visit, Russell met with Taliban officials this week to discuss concerns ranging from child health and rights to education, she said – in particular the mounting threat of acute malnutrition and access to education.

The United Nations, along with international organizations, face mounting challenges to addressing Afghanistan’s growing humanitarian crisis. The U.N. projects this year that over 1 million children will need treatment for malnutrition and up to 97% of Afghans could be living below the poverty line. A landmark UNICEF $2 billion appeal to donors for aid is only 17% funded.

At Kabul’s Indira Gandhi Hospital for Children, wards are packed with mothers from across the country seeking treatment for their malnourished babies.

Zermina Mohammed said she didn’t have the 1,000 afghanis ($10) needed to pay for medication. She begged a relative in the Puli-Charki area of Kabul for the money. But she still needs more, she said as she cradled her sick baby.

As poverty deepens, billions of dollars in Afghanistan’s foreign assets remain inaccessible to the still-unrecognized Taliban government. The once-aid dependent country is unable to pay public sector workers, including in the health and education sectors.

Donors and NGOs have had to step in to foot the wage bill. At the Indira Gandhi hospital, crowds of hospital staff gathered to pick up wages. The money was being doled out by the International Committee of the Red Cross, according to hospital director Mohammed Iqbal Sadiq.

On the education front, funds from the European Union are paying teacher salaries, Russell said.

But the system is by no means a long-term solution, Russell said.

“Ultimately, the international community has got to try and come together to work with the de-facto authorities here to do this together,” she said. “It’s not something that humanitarian organizations can solve on their own.”

Staving off donor fatigue requires results, and access to education for girls and women is a key indicator.

“Donors care a lot about the people of Afghanistan,” Russell said. “I think the key is to show them that what we are doing is working and when they see that it does really make a difference in terms of their willingness to continue to partner with us.”

“When they see programs that are getting children to school, if they see that on March 22, I think that will make a big difference.”

UNICEF chief: Taliban committed to let girls back to school02.25.2022