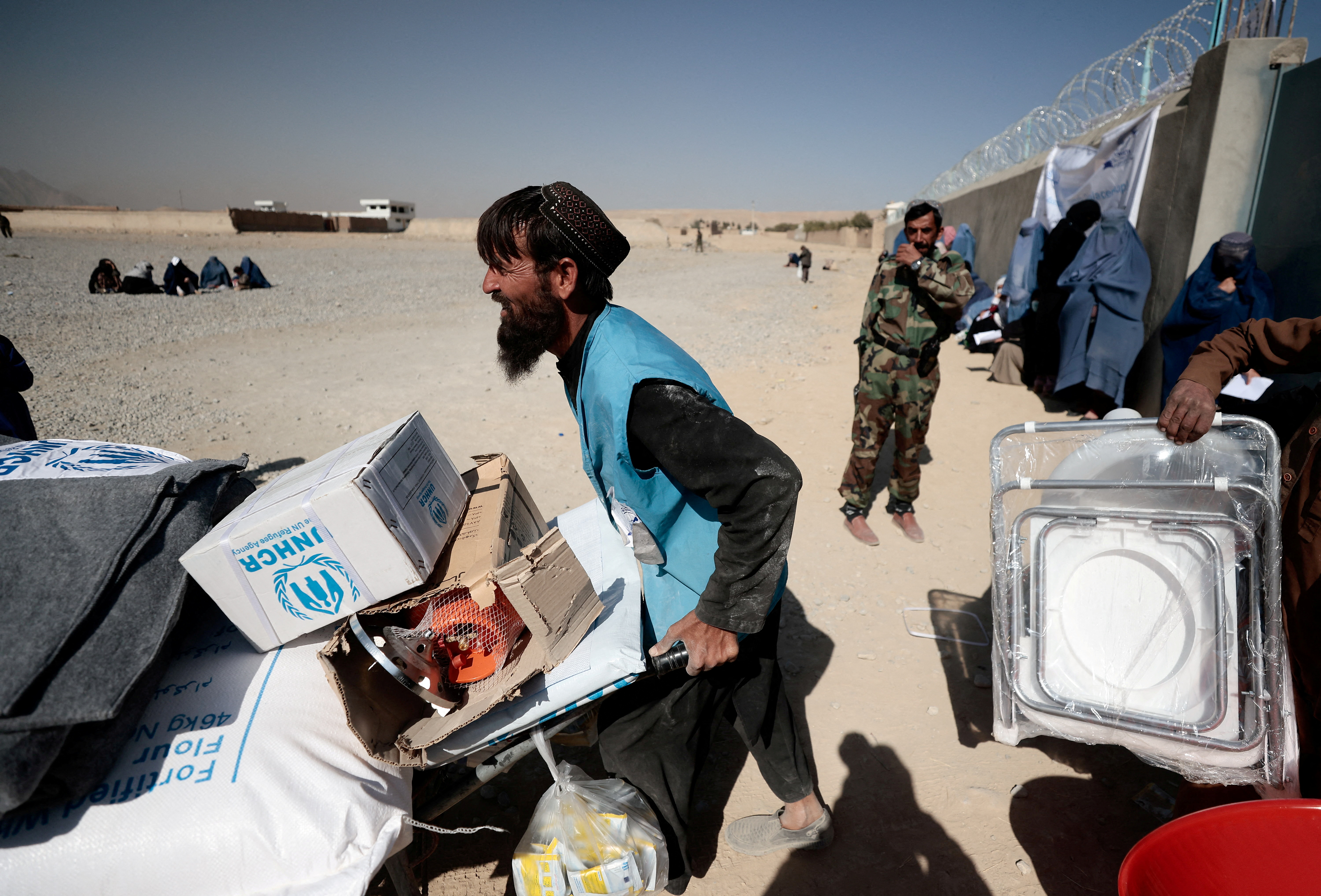 An UNHCR worker pushes a wheelbarrow loaded with aid supplies for a displaced Afghan family outside a distribution center as a Taliban fighter secures the area on the outskirts of Kabul, Afghanistan October 28, 2021. REUTERS/Zohra Bensemra/File Photo

KABUL, Jan 12 (Reuters) – The Afghan Taliban on Wednesday proposed creating a joint body of its officials and international representatives to help coordinate billions of dollars in planned aid.

It was not clear whether the United Nations and foreign governments would back such an agreement, as it would constitute an increase in access to international funding by the Taliban, some of whose leaders have been hit by U.S. sanctions.

The abrupt withdrawal of foreign aid following the hasty exit of American forces and the Taliban’s stunning victory last August left Afghanistan’s economy on the brink of collapse. Hunger is widespread and prices for basic goods have spiked.

Western sanctions aimed at the Taliban also prevented the passage of basic supplies of food and medicine, although this has since eased after exemptions were passed by the U.N. Security Council and Washington in December.

On Tuesday, the United Nations asked donors for $4.4 billion in humanitarian aid for Afghanistan in 2022 and the White House announced it would donate an extra $308 million. read more

“The goal of this committee is coordination on a higher level for facilitating humanitarian aids of the international community and to distribute aid for needy people,” Afghanistan’s acting Deputy Prime Minister Abdul Salam Hanafi told a news conference in Kabul also attended by U.N. envoy Ramiz Alakbarov.

“We ask the international communities that they should use the government capacities for their aid goals.”

Foreign governments, facing warnings that millions of people could starve as the economic crisis intensifies, are ramping up humanitarian aid, but they are keen to keep it away from government interference.

An Afghan finance ministry spokesman said that discussions would take place over the next few days with the United Nations on the proposal for the joint body.

The U.N. Secretary General’s deputy special representative for Afghanistan Alakbarov told Reuters that U.N. agencies were already communicating their requirements to the Taliban over aid.

Their main condition has been access to the entire country, including for female staff members.

“International organisations are totally free. They can continue their work according their own procedures. (We) will provide anything they need – security … transportation,” Finance Ministry spokesman Ahmad Wali Haqmal said.

“The Islamic Emirate (Taliban) doesn’t want anything personally, or to distribute the aid; we just want to coordinate with international organisations,” he said.