KABUL, Nov 10 (Reuters) – An Afghan family that lost 10 members, including seven children, in a mistaken U.S. drone strike on a Kabul home says it is still seeking justice and has yet to hear from the Americans more than two months after the tragedy.

The U.S. military has said that a series of errors led to the attack, which was supposed to have targeted an Islamic State suicide bomber posing an imminent threat to U.S.-led troops at Kabul airport.

“Justice should be done,” Ajmal Ahmadi, Zamarai’s younger brother, told Reuters at the family home that was struck by a Hellfire missile fired by a U.S. drone on Aug. 29.

Speaking in the crowded residential area near Kabul airport – recently the scene of a chaotic evacuation of thousands of people fleeing the Taliban – he also expressed disappointment they had yet to hear from American officials.

Lieutenant Colonel César Santiago, spokesperson for the Department of Defense, said it was taking steps to respond to the airstrike.

“To protect the privacy of their family members, as well as to help protect their safety and security, we are not able to provide more information regarding these efforts at this time,” Santiago said.

The Pentagon previously said it was looking at making condolence payments to the family and will work with the State Department to relocate to the United States family members who want to leave.

“Family member survivors have repeatedly asked for meaningful transparency and accountability for the wrongful killing of their loved ones, but they did not receive it from the Pentagon investigation,” said Hina Shamsi, director of ACLU’s National Security Project.

“Impacted family members and NEI employees are at a high risk as a result of the U.S. government’s actions and must urgently be evacuated.” 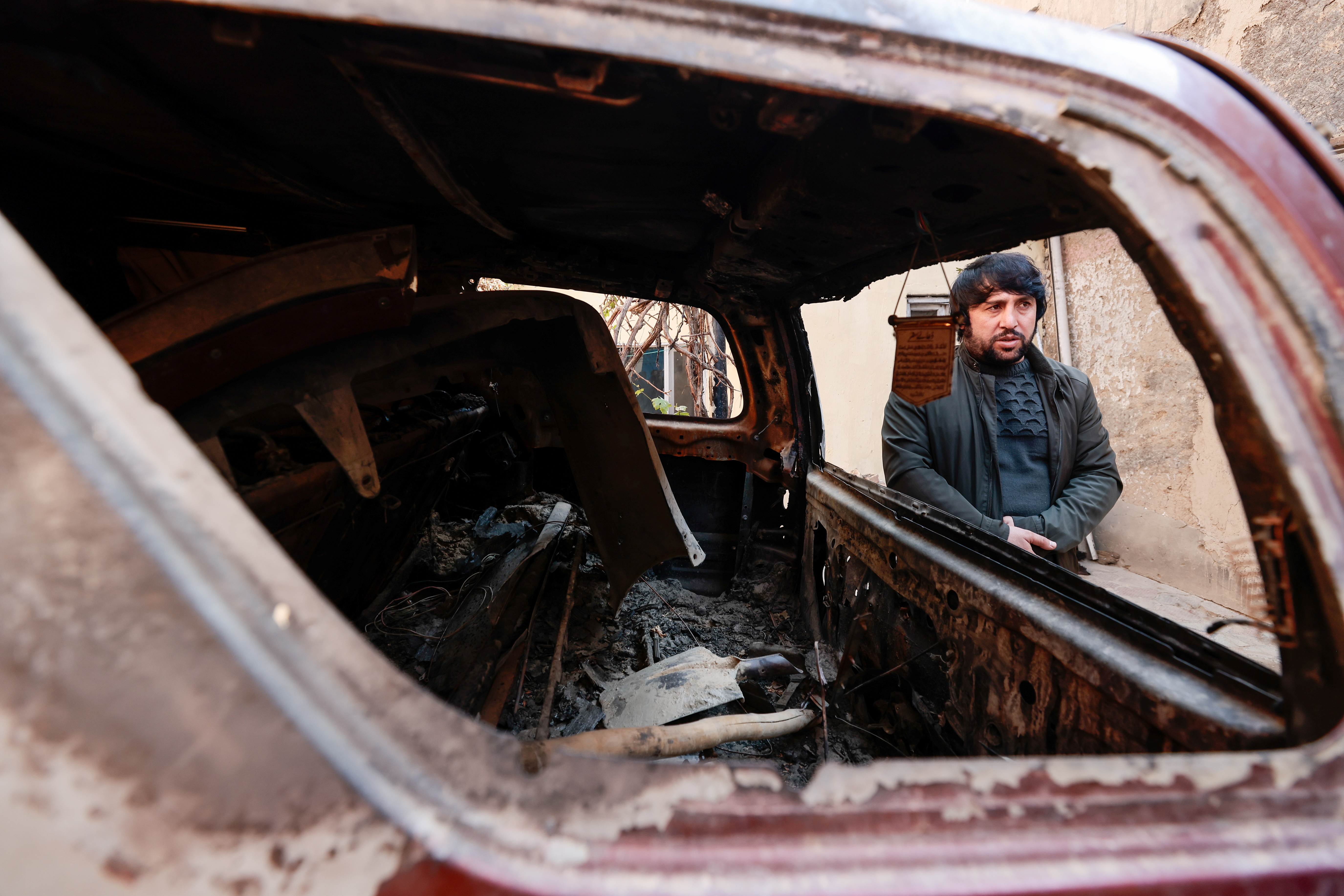 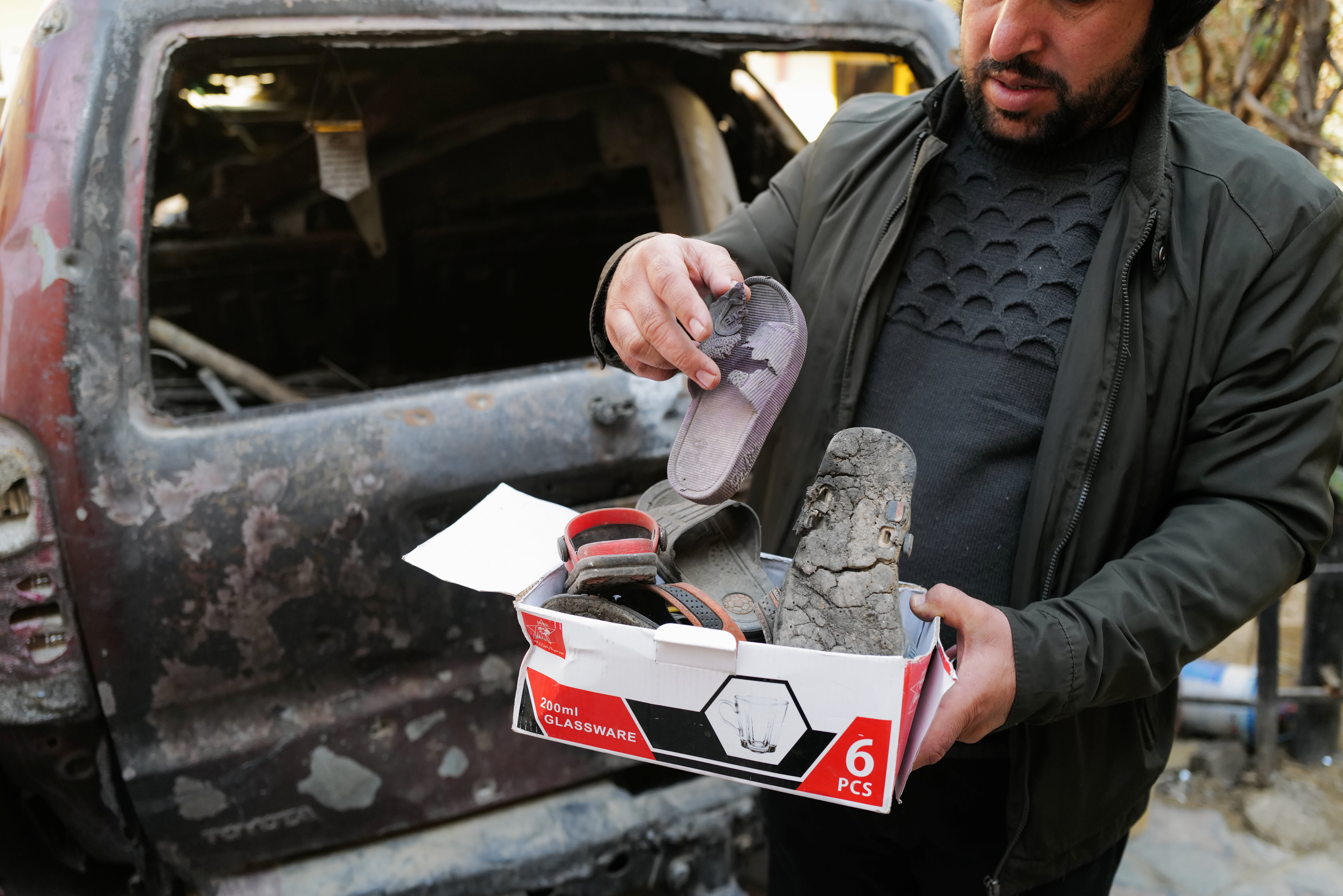 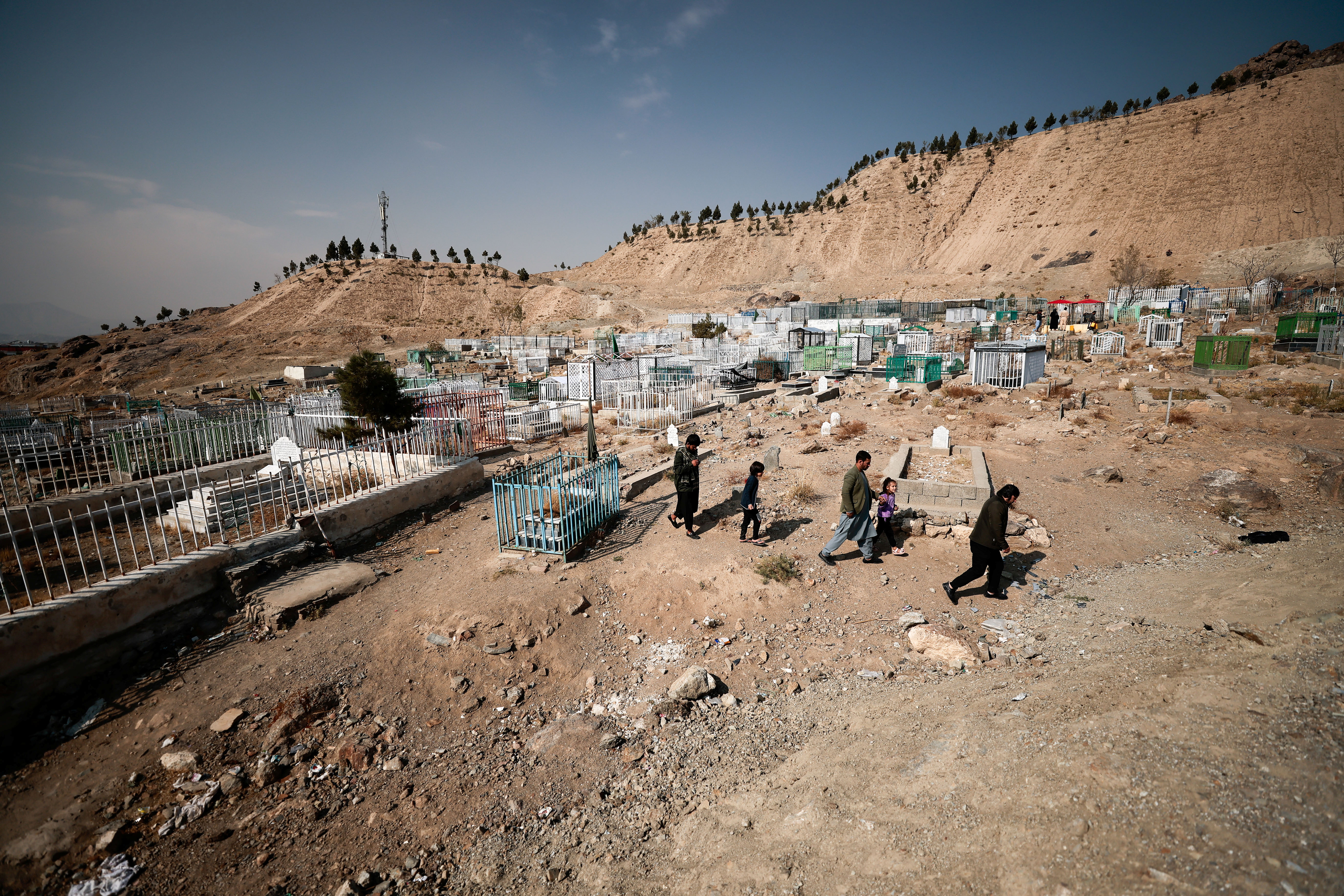 Ajmal Ahmad shows shoes of his nephews, victims of a U.S drone strike that killed 10 civilians, including seven children, as he stands beside a damaged car at the house’s courtyard in Khwaja Bughra in Kabul, Afghanistan November 7, 2021. REUTERS/Zohra Bensemra

On Aug. 15, Taliban insurgents entered the capital and seized power with barely a fight, after U.S.-trained Afghan forces melted away.

Last week, an investigation by the U.S. military’s inspector general said that although the strike was a mistake, it was not a case of criminal negligence and that disciplinary action was not recommended.

The errors included not noticing the presence of a child minutes before the strike took place.

The child was one of several who were in the compound when the missile struck, decimating an entire family. It killed Zamarai and three of his children – Zameer, 20, Faysal, 16, and Farzad, 12.

Two of Zamarai’s brothers also lost their children: Arveen, seven, bin Yameen, six, Malika, three, along with Ayat and Sumaya, both of whom were two years told. Their sister’s child, 28, who was visiting, was also killed.

The family is struggling to come to terms with what happened.

“Even the sandals that were burned, we have kept them,” Ajmal said, adding that women in the family still hug and kiss the charred shoes. “They (the women) are in a bad state.”

The family has moved out of the house, because staying there invoked too many memories for those left.

The surviving children, Ajmal said, often asked the adults to take them to visit the graves of their siblings and cousins.

Ada, seven, never misses an opportunity to visit the cemetery where her little sister Malika is buried.

She sits by the grave, praying and cleaning off dust from the epitaph, which reads: “I ask, ‘why did you leave, this was not our destiny’ – they say, ‘what can we can do, destiny is like this’.”