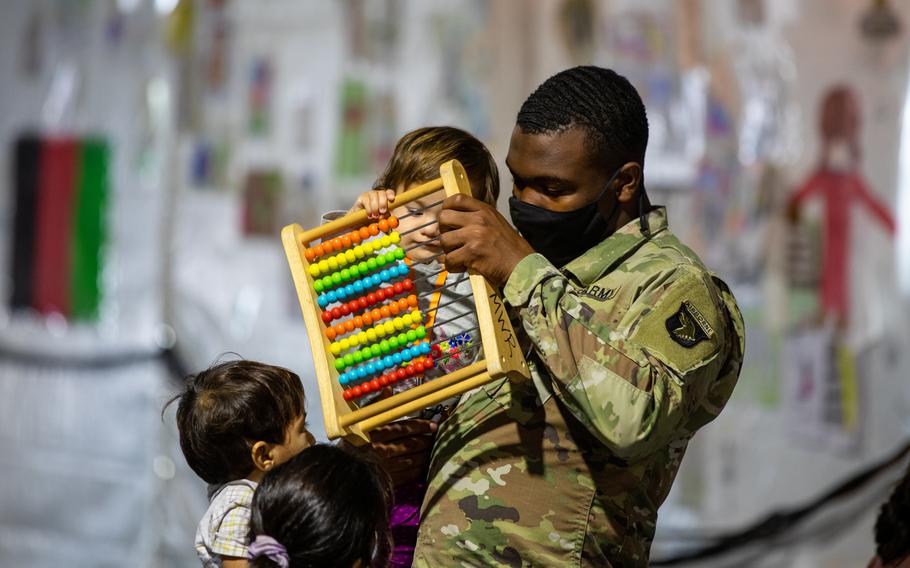 The military has been housing Afghan evacuees at eight installations in the U.S. since late July when evacuations began in the final weeks of the U.S. involvement in Afghanistan, which ended Aug. 30. The bases have a collective capacity of 64,000, Kirby said.

About 4,100 of the 6,689 Afghans have resettled since Sept. 30, when the Pentagon last gave an update on the mission dubbed Operation Allies Welcome.

Approximately 3,000 Afghans remain on U.S. military bases in the Middle East and another 463 are at U.S. bases in Europe, Kirby told reporters at the Pentagon. Those evacuees are undergoing security screenings before they are taken to the U.S. to wait out their visa process.

Those numbers show some improvement from the Sept. 30 update when about 14,000 evacuees remained at overseas staging bases awaiting flights to the U.S. The flights were halted in early September due to a measles outbreak.

After the outbreak, the military vaccinated all evacuees against measles. Medical workers also have been administering coronavirus and influenza vaccinations to the Afghans.

The federal government is expected to reimburse the Defense Department for expenses incurred while housing the evacuees at military installations. The Pentagon is still awaiting that reimbursement, but Kirby said the financial costs have not affected military readiness.

“But clearly there are assets — resources, time — that are being devoted to this that are in some cases not being diverted to other things,” he said.

The Defense Department provides food, housing, medical assistance and recreational opportunities for Afghans at the installations.

The bases in the U.S. hosting Afghans are Fort Bliss in Texas, Joint Base McGuire-Dix-Lakehurst in New Jersey, Fort McCoy in Wisconsin, Camp Atterbury in Indiana, Holloman Air Force Base in New Mexico, and Fort Lee, Fort Pickett and Marine Corps Base Quantico in Virginia.