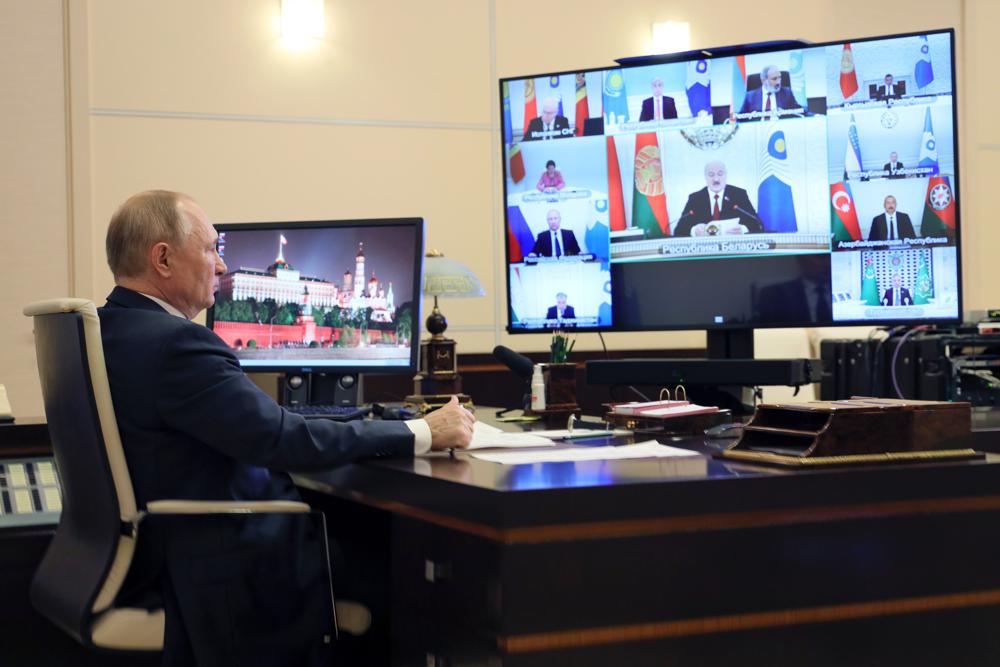 MOSCOW (AP) — Russian President Vladimir Putin said Friday there must be no rush in officially recognizing the Taliban as the new rulers of Afghanistan, but emphasized the need to engage in talks with them.

Speaking during a video call with leaders of other ex-Soviet nations, Putin said that “the interim government formed by the Taliban regrettably doesn’t reflect the entire spectrum of Afghan society,” but also noted their pledge to hold elections, and their efforts to restore the functioning of state structures.

“We shouldn’t hurry with the official recognition of the Taliban,” he said. “We understand that we need to interact with them, but there shouldn’t be any hurry and we shall discuss that together.”

At the same time, Putin mentioned Moscow’s intention to host another round of talks between Afghan parties next week and underlined the need to restart consultations on Afghanistan between Russia, the United States, China and Pakistan.

“We need to support the process of inter-Afghan settlement and try to help normalize the situation in the country,” he said.

Russia is set to host the Taliban and other Afghan factions for talks Wednesday in a move that reflects Moscow’s efforts to expand its clout.

Zamir Kabulov, the Kremlin envoy on Afghanistan, said Friday that the Taliban confirmed they will attend the so-called “Moscow format” talks in the Russian capital.

Kabulov said he doesn’t expect the talks to produce any breakthrough, describing them as part of a “long evolutionary process.”

He noted that the agenda will cover human rights issues and the humanitarian situation in the country, adding that Moscow sees as a platform for “frank discussions” about ways to constructively tackle Afghanistan’s challenges.

Diplomats from Russia, the U.S., China and Pakistan are also set to meet in Moscow for talks on Afghanistan this month.

The Soviet Union fought a 10-year war in Afghanistan that ended with its troops withdrawing in 1989. Since then, Moscow has made a diplomatic comeback as an influential power broker in international talks on Afghanistan, hosting the Taliban representatives and members of other factions for a series of bilateral and multilateral meetings.

Unlike many other countries, Russia hasn’t evacuated its embassy in Kabul and its ambassador quickly met with the Taliban after they took over the capital.

The Taliban were added to the Russian list of terrorist organizations in 2003, and Moscow has not yet moved to remove the group from the list. Any contact with such groups is punishable under Russian law, but the Foreign Ministry has shrugged off questions about the seeming contradiction by emphasizing the need to engage the Taliban to help stabilize Afghanistan.

Putin on Friday emphasized the security challenges posed by the Islamic State group and other militants based in northern Afghanistan, and noted that drug trafficking from Afghanistan will continue to present a challenge.

Russia has vowed to provide military assistance to its ex-Soviet allies in Central Asia to help counter the threats, and held a series of joint drills in Uzbekistan and Tajikistan that neighbor Afghanistan.

Another sweeping military exercise in Tajikistan that would involve 5,000 troops, more than 700 military vehicles and combat jets is scheduled for next week.