Roya was the face of the modern young Afghan woman. As leader of a girls’ club funded by the U.S. government, she gave her troops a script for their lives that their mothers could not pursue: They were just as powerful as boys in their ability to change their communities, she taught them. Working for another small nonprofit, she helped build connections between American and Afghan girls.

“I taught them that no one could silence us or tell us something wasn’t possible just because we were girls,” she said.

After Afghanistan’s government fell to Taliban insurgents, Roya and some of those she worked with knew they could be targeted. But without direct ties to the U.S. military, they had no hope of boarding a government evacuation flight out of Kabul. Instead, their nongovernment organization partners in the United States engineered a harrowing escape for Roya and some of her friends and family to neighboring Pakistan.

“The Taliban were searching for people who had worked with foreigners, and they were capturing them,” Roya, 20, said. “I had to save my life, and my family’s life.”

Among vulnerable Afghans left behind after the U.S. withdrawal last month were thousands of people who worked for small nonprofits, many funded by the State Department or agencies like the U.S. Agency for International Development to promote women’s rights, education and civic engagement. With many of their employees just as threatened as those employed directly by the U.S. government, these cash-strapped organizations have had to find their own ways to get people out.

Thousands of miles from Afghanistan, using their phones and laptops, American N.G.O. leaders have been scrambling to raise money, secure documents, find lawyers and arrange travel for staff members and their families. They are also helping evacuate women whose jobs have landed them on the Taliban’s list of potential targets, including some women who trained Afghan policewomen, lawyers and politicians.

“It’s like an underground railroad,” said Stephanie Sinclair, a photojournalist who founded Too Young to Wed in 2014 to empower girls and end child marriage. She orchestrated safe passage for 45 people last week from Afghanistan to Pakistan, where they were waiting for transfer to Albania, a way station for those hoping to resettle in the United States, Canada or another country.

Among them was a lawyer who had prosecuted cases of spousal and child abuse, a girls’ rights advocate who had received death threats and a woman who had served in the gender unit of the national election commission.

“Small, grass roots N.G.O.s are the ones moving mountains and doing the heavy lifting to get people to safety,” Ms. Sinclair said from New York. 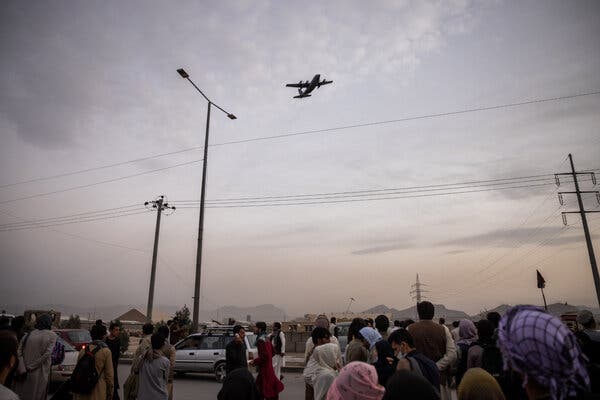 For help, Roya and her colleagues turned to Ben Schumaker, who had employed them in Kabul for the art nonprofit he runs out of his garage in Madison, Wis. “Our group is trying to fulfill the promise made by our government to bring them to America,” he said.

With others from his organization, the Memory Project, Mr. Schumaker arranged furtive transport for Roya and the others to a safe house in the Pakistani capital of Islamabad. All told, he arranged for 27 people connected to nonprofit groups to escape.

Several leaders of these groups said that the Biden administration raised false hopes when it announced in early August that it would expand access to the U.S. refugee program for their Afghan employees who did not qualify for the special immigrant visas being offered to people, such as interpreters, who had worked for the military. These workers could apply for a new “Priority 2” designation, the State Department said.

“They were rejoicing that they would get on a plane to the U.S.,” Mr. Schumaker recalled. “The reality was, they were never close to being eligible for an evacuation flight. It was an empty promise.”

To even apply for the program, applicants had to be outside Afghanistan, they were told later, and they would have to wait at least a year for U.S. authorities to review their cases.

“The program was a huge red herring; a P.R. stunt,” said Marina LeGree, founder of Ascend, a mountaineering program that aims to develop the physical and mental strength of teenage girls and young women through athletic activities and community service, like mentoring orphans and teaching illiterate women to read. The administration has acknowledged that resettling can be a lengthy process.

Ascend managed to place eight women instructors who were featured prominently on the group’s website, along with some family members, on an evacuation flight to Abu Dhabi in the United Arab Emirates on Aug. 22. They accomplished it with help from a U.S. military special forces veteran whose sister is a rock climber. Two of the families have been accepted by Denmark; four others by Germany. Two others hope to make it to the United States.

Ms. LeGree then expanded her effort to others at risk, like the organization’s driver and guards, as well as athletes, many of whom are members of the Hazara minority.

The mother of small children, Ms. LeGree has been up at all hours, she said, calling every personal and professional contact she had ever made, and banking on the good will that people have felt for the mission of her organization.

Updates on Afghanistan  Sign up for a daily email with the latest news on the Taliban takeover in Afghanistan.

Sixty-eight people have been evacuated thus far. Eighteen arrived on Wednesday in Chile, which offered them permanent residency. Ireland has said that it will accept 20 girls, and Ascend is hoping that Poland and New Zealand will take others.

“By hook and crook, we are getting people out,” she said.

The Taliban has not banned nongovernmental organizations from working in Afghanistan, and most groups are hoping to remain there even after removing staff members who felt their work to advance gender equality would be banned under the Taliban’s interpretation of Islam, which frowns on public roles for women.

Mr. Schumaker’s Memory Project has been using portraiture to foster connections between American youth and peers in more than 50 countries for 17 years; he took the initiative to Afghanistan four years ago.

Photographs of Afghan students are distributed to high schoolers in the United States, who then create handmade paintings and drawings of them, which are sent to their peers with a photo of themselves on the back.

Some 1,000 portraits were shipped each year to Roya in Afghanistan, who, in addition to being a girls’ club leader, organized ceremonies at schools for the delivery of the artwork. The high-profile events were festive, often attended by senior government officials.

When Kabul fell to the Taliban, Roya told Mr. Schumaker that she had been so outspoken in recent years that she feared reprisals.

In recent television appearances, she had said that her work with girls’ club troops to perform community service projects, such as painting neglected city property, might be opposed by some “closed-minded” people. Roya also had said that she wished for a “free and independent Afghanistan.”

When the Taliban swept into Kabul, the university where she studied journalism was shuttered and the nonprofits that employed her halted operations. High schools eventually reopened, but only boys have been allowed to attend.

“Everything was shattered,” Roya said. “My life was in danger.”

She and her family had to flee.

On Aug. 24, a group of nonprofit workers and their families, 50 people in all, boarded a bus that they chartered in Kabul to ferry them to the Afghanistan-Pakistan border. Mr. Schumaker tapped a trusted contact to meet them on the other side.

He communicated with Roya by WhatsApp throughout the journey, which took 32 hours, including stops at Taliban checkpoints where the passengers never disclosed their true destination.

Scenes at the border resembled those at the Kabul airport earlier in the month, with thousands of people pressing against one another for hours under the scorching sun, waiting to get across. At least one person was trampled to death.

Pakistani guards were demanding permits to pass. Roya recalled crying as she pleaded with them, “Please let us in. Please. Our lives are in danger.”

Amid the mayhem, the group was split up. Several families, after assessing the risk, decided to return to Kabul.

Roya was distraught. She wrote to Mr. Schumacher that she would rather be shot dead than not make it across.

On their fourth attempt, most of the families made it across, including Roya, her mother, sister and brother.

Their guide whisked them away in a van to reach a guesthouse in the city of Quetta to get some rest before traveling to Islamabad, where they were to live until they could be resettled in another country. They were stopped en route by the police, who ordered them to turn around, and the guide appealed to the officers’ humanity, pointing to the weary women and children.

Twenty-seven people in six families, including 13 children, arrived in Islamabad this month. About 10 days later, Mr. Schumaker made a lightning visit to Islamabad to meet Roya and the others in person for the first time, carrying wads of cash to pay for rent, food and other basic necessities.

He had harbored illusions of taking them for a nice meal, but everyone felt it was too risky to venture out. Instead, Mr. Schumaker got takeout from an Afghan restaurant.

Back in the United States, Mr. Schumaker enlisted a childhood friend, a lawyer, to expedite immigration paperwork for Roya’s family.

It was not clear how long that would take, and Roya already has grown impatient.

“Let me fight again, let me work again,” she said.

Miriam Jordan is a national correspondent who reports on the impact of immigration on the society, culture and economy of the United States. Before joining The Times, she covered immigration at the Wall Street Journal and was a correspondent in Brazil, India, Hong Kong and Israel.