President Biden was right to withdraw US troops. But we should have no illusion that this will end the war for Afghans. 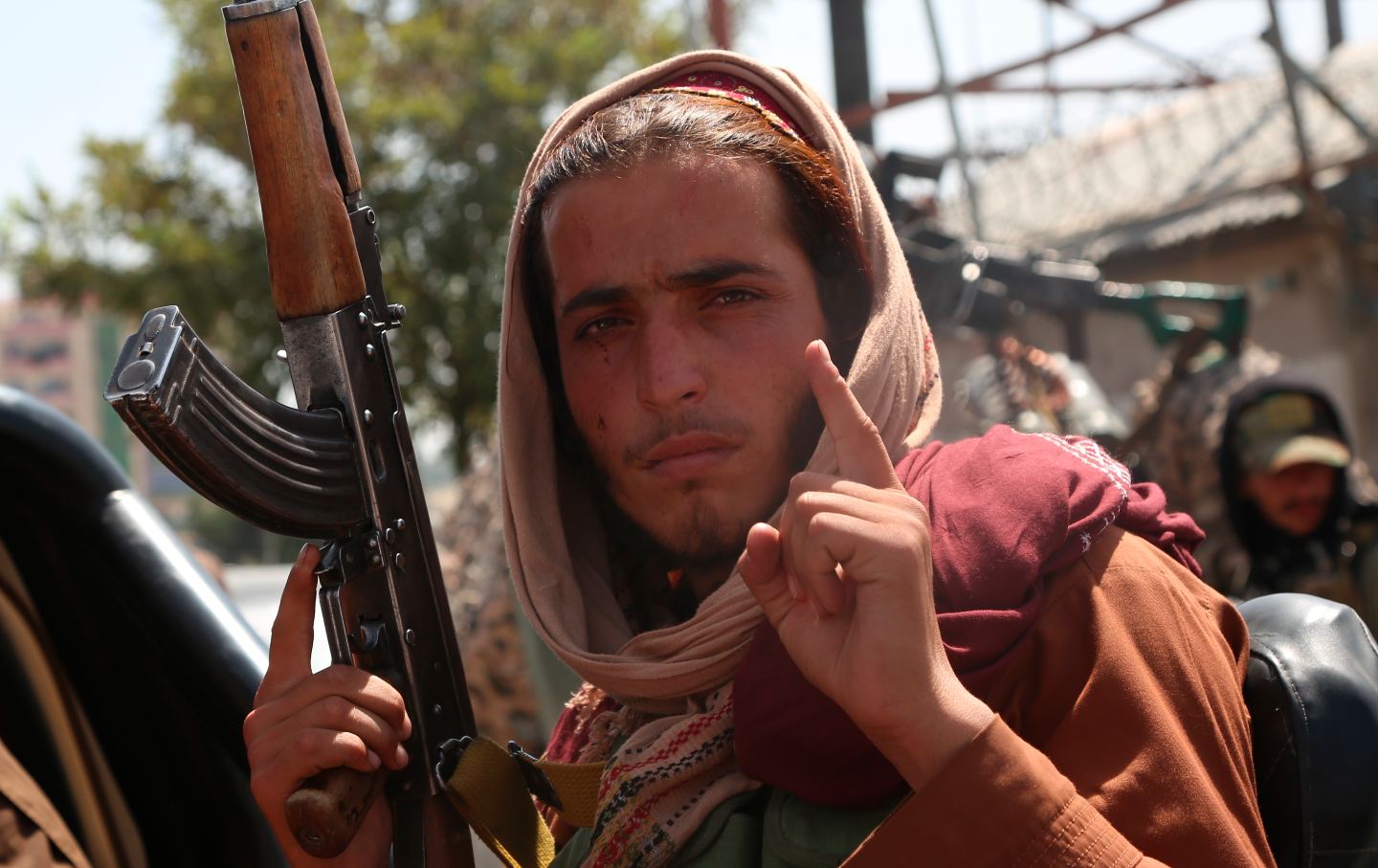 A Taliban fighter is seen on a street in Kabul. The Taliban took over the capital city on August 15, as President Ashraf Ghani resigned and fled abroad. (Stringer / Sputnik via AP)

We don’t know yet what the consequences of the events in Afghanistan will be. We do know that there are more than 250,000 Afghans internally displaced since the end of May, thousands more in recent days living in makeshift tents and in parks and on the streets in Kabul. We do know Afghanistan’s borders are almost all closed, and that people are terrified. People are afraid of the rising violence, afraid of the Taliban coming to power, afraid of the US bombing underway across the country all week.

Questions are everywhere. How did the Taliban, with 75,000 or so scattered forces, defeat the 300,000-strong US-trained, US-armed, and US-supported Afghan government troops? Why didn’t that US-trained military fight? Why did the United States withdraw most of its troops—and shouldn’t Biden send troops back to protect Afghan women from Taliban control?

First, most Afghan soldiers were not defeated militarily by the Taliban at all. Some individual soldiers simply put down their weapons and ran. More frequently, local commanders negotiated with the Taliban to surrender with troops and weapons en masse—directly rejecting the corrupt government in Kabul.

Despite 20 years of occupation, the United States couldn’t “win” militarily either—because there is no military solution to terrorism. After the United States and its allies overthrew the Taliban government in 2001, they created a whole new government. Staffed largely by pro-Western Afghan exiles, it was modeled after Western parliamentary systems—with power concentrated in the president and parliament of a central government in Kabul. It was completely at odds with Afghanistan’s long-standing cultural and political traditions —where power emanates from the family and tribal level, not from the national capital of a modern nation-state. For most Afghans (75 percent of whom live in scattered villages and rural areas, not in cities), what happens in Kabul rarely reaches beyond Kabul.

So the military that the Pentagon created was supposed to be fighting for—and accountable to—a government that most of its soldiers never supported in the first place. President Biden was right when he said, “One more year, or five more years, of US military presence would not have made a difference if the Afghan military cannot or will not hold its own country.” Of course, he didn’t acknowledge that it wasn’t their country the troops were being asked to protect but a corrupt and wildly unpopular government imposed by an occupying army.

Negotiations are still underway to determine if there will be some kind of power-sharing arrangement, but the Taliban is now clearly the dominant force in Afghanistan. It remains unclear if the US bombing raids of recent days, involving Vietnam War–era B-52s as well as drones and almost certainly resulting in civilian casualties, are continuing as the Taliban takes control.

Almost 80 percent of the displaced people flooding Kabul and other cities are women and children. The Taliban’s legacy of misogyny and violence against women continues to fuel fear of the group’s return to power, particularly from urban women in Kabul and Kandahar, where US-imposed laws protecting education, employment, public engagement, and more had significant impact on women’s lives. In the villages and rural areas, where 75 percent of Afghans live, those laws and policies changed far less in the lives of most women.

Throughout the 20 years of US occupation, the Taliban fought to expand its control of large swaths of rural territory. Negotiations were possible in many of those areas between Taliban commanders and local representatives—generally community elders or religious leaders—including arrangements for girls’ education, health care, etc. While they did not lead to anything close to equality or full rights for women, those local interactions may hint at some future possibilities.

The Taliban of 2021 faces challenges different from their earlier counterparts’. During their five years in power—and their 20 years struggling to return to power—their country and its position in the world changed in significant ways. Although the impact of US-imposed ideas rarely reached beyond the major cities, things like access to cell phones and the Internet has increased Afghans’ awareness of the world outside their isolated villages. While some of today’s Taliban hold to the same or an even more extreme version of religious law, especially regarding the role of women, some of their leadership are certainly more aware of the need for engagement with the rest of the world—particularly for economic assistance—and of what the world may require of them.

President Biden was right to withdraw US troops, ending a 20-year US war that never should have been waged at all. But we should have no illusion that this will end the war for Afghans. As women’s rights activist and former Afghan parliamentarian Malalai Joya reminds us, women and civil society in Afghanistan have three enemies—the Taliban, the warlords disguised as a government, and the US military occupation. If you can get rid of one of them, she said, we’d only have two.

It won’t be easy for Afghans going forward, but the withdrawal of US troops is a necessary, if still insufficient, precondition for ending that war.

For those of us working to press the US government for some level of accountability, perhaps these demands would be a good place to start:

• Given the legacy of US actions in Afghanistan, begin the process of officially acknowledging US responsibility for the war’s impact on Afghan people.