The two sides issued a short joint statement in which they agreed to continue high level talks on peace.

High-ranking delegations from the Islamic Republic of Afghanistan and the Taliban concluded two days of negotiations and agreed to expedite the peace efforts and continue high-level talks, but fallen short to meet the people’s expectations from their engagement amidst increasing violence in the country.

Abdullah Abdullah, the chairman of the High Council for National Reconciliation and the head of the 7-member delegation of Afghan politicians in talks with the Taliban, assured the participants of the Afghan government’s firm will and commitment for peace and said the two days of negotiations were a good opportunity for both sides to clearly share their position to each other.

The two sides issued a short joint statement in which they agreed to continue high level talks on peace, but there was no mention about de-escalation of violence or ceasefire.

They agreed to find a common ground to move the country forward from the current situation, the statement reads.

Both sides agreed to protect the country’s civilian infrastructure, prevent civilian casualties and cooperate with humanitarian assistance, the statement said.

Both sides in their statement thanked Qatar for hosting the talks and other countries for their support to the peace process.

It also reiterated on cooperating with efforts to treat COVID-19 patients in the country’s health centers, especially when it comes to oxygen supply to these centers. 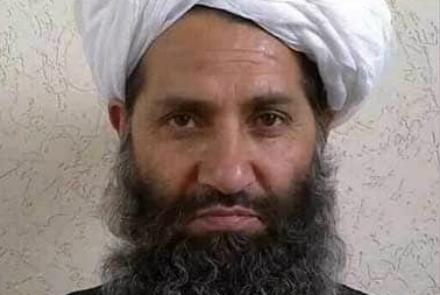 Taliban leader Mullah Hibatullah Akhundzada in an Eid message on Sunday emphasized the need for a political solution to the Afghan crisis.

He mentioned the Taliban’s takeover of districts but said the group’s support for a political solution is “serious.”

The Taliban leader also said that the group would take advantage of any opportunity that would result in the establishment of an Islamic system and peace and security in the country.

Akhundzada said the group is committed to resolving issues through dialogue, but he accused the Afghan government of wasting time in the peace talks.

He also said that the Taliban wants “good, strong diplomatic, economic and political relations” with the world, and he assured neighboring countries, the region, and the world that Afghanistan will not allow anyone to use its territory to threaten the security of other countries.

He has called on other countries not to “interfere” in Afghanistan’s internal affairs.

Akhundada pledged that the Taliban will work to protect embassies, foreign organizations and investors.

He said that the Taliban is committed to freedom of speech within the framework of Islamic law and the national interests of the country, and that journalists should act on these two important points and adhere to the principles of journalism.

On Saturday, a high-ranking delegation from the Islamic Republic of Afghanistan led by Chairman Abdullah Abdullah, and a Taliban delegation led by the deputy leader of the group Abdul Ghani Baradar, started peace negotiations with the hope of agreeing on key issues that will lead to a political settlement and an end to violence in the country.

The meeting was hosted by Qatar.

Representatives of the republic and the Taliban have sporadically engaged in talks for the last 10 months, but their meetings so far have not made tangible progress.

Addressing the opening ceremony of peace talks in Doha, Abdullah Abdullah, head of the High Council for National Reconciliation, said Afghans are passing through difficult days, heavy clashes are underway and the main victims are the people.

Abdullah said that comprehensive meetings were held between Afghan politicians and the government leaders ahead of the Doha meeting and all had one message: Afghanistan’s problem has no military solution.

He said that all efforts should be focused on ending the war and achieving a political settlement.
To achieve peace, there is a need for flexibility from both sides, Abdullah said.

“We believe that the regional and international environment has been provided… Afghans want the continuation of the world’s support to the peace process,” he said.

Addressing the event, the Taliban’s deputy leader Abdul Ghani Baradar said that despite the lack of progress in intra-Afghan negotiations in Doha, there is a need to keep the hope. He added that they will make efforts to make the talks a success.

Baradar said that to ensure Afghanistan’s prosperity, there is a need for a central and independent Islamic system and to achieve this “we should ignore our personal interests.”

Calling for unity among Afghans, Baradar said Afghanistan is a common home for all Afghans and that “we should ignore details if we want to achieve bigger goals.”

“We should end the lack of trust and should make efforts for the nation’s unity,” Baradar added.

The meeting comes as heavy clashes have been ongoing between government forces and the Taliban in various parts of the country for the last two months.