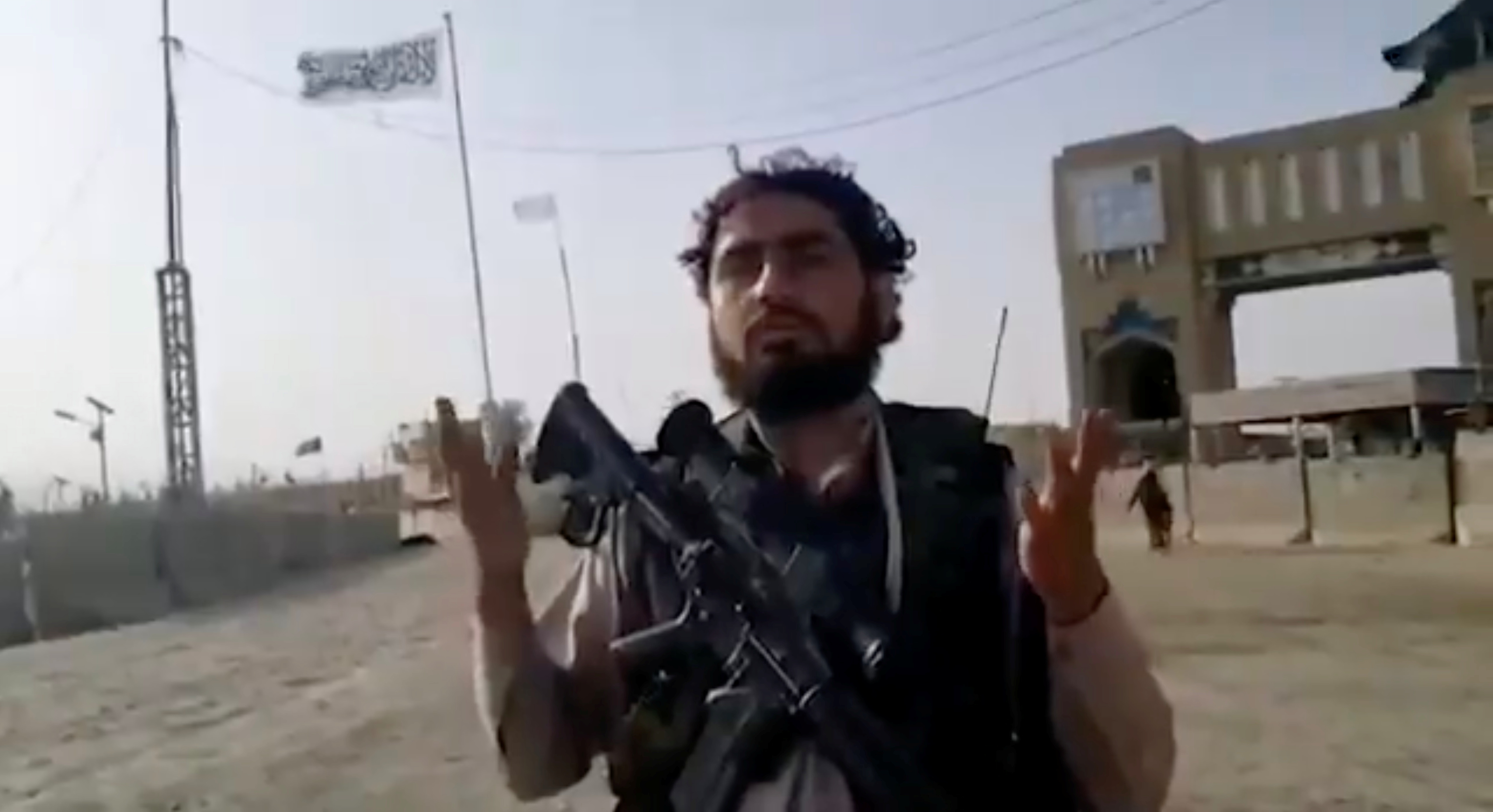 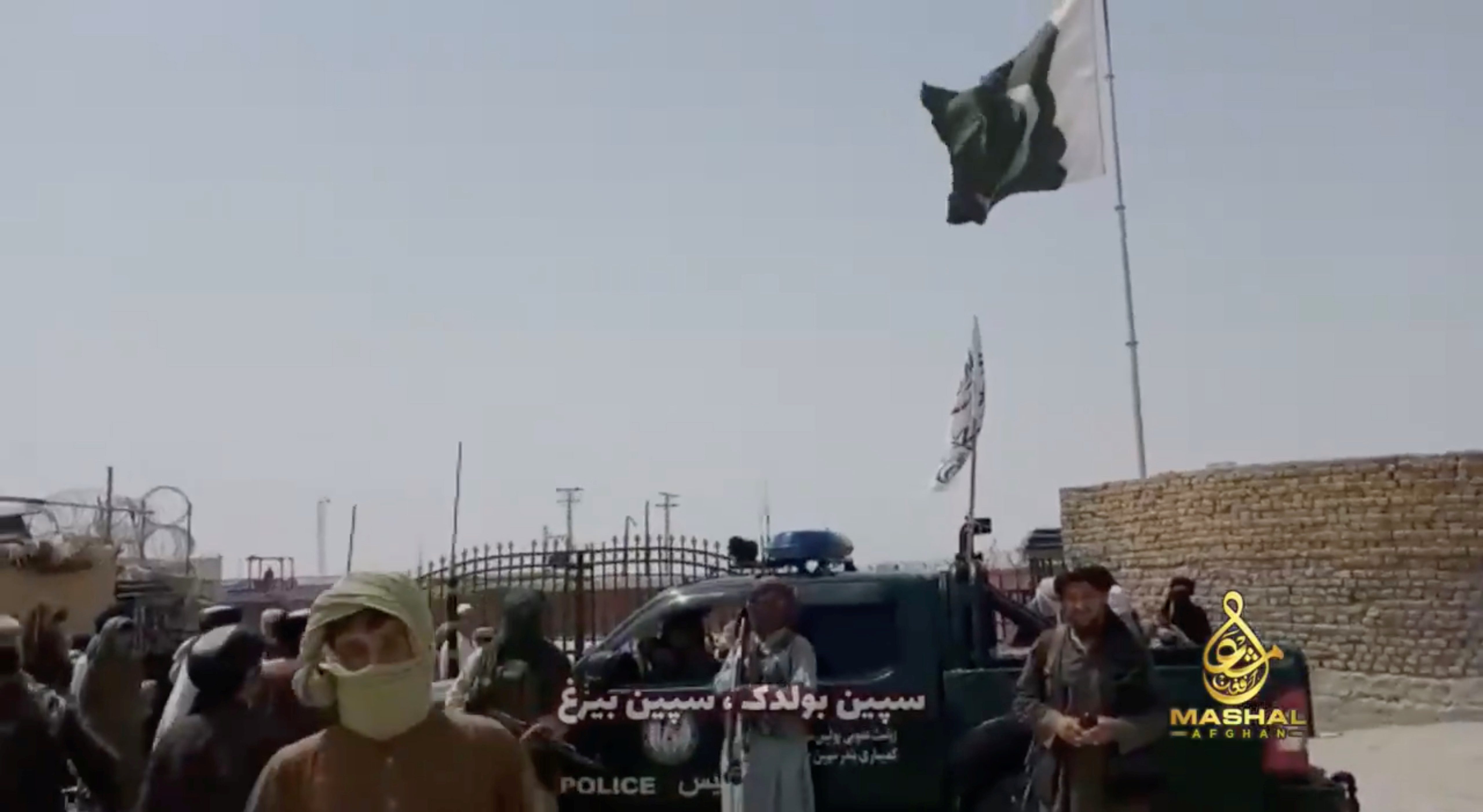 KABUL, July 14 (Reuters) – Taliban fighters in Afghanistan seized control of a major border crossing with Pakistan on Wednesday, one of the most important objectives they have achieved so far during a rapid advance across the country as U.S. forces pull out.

Video released by the militants showed their white flag with black Koranic verse flying in place of the Afghanistan flag above the Friendship Gate at the border crossing in the Afghan town of Wesh, opposite the Pakistani town of Chaman.

“After two decades of the brutality of Americans and their puppets, this gate and the Spin Boldak district were captured by the Taliban,” a fighter said to camera.

“The strong resistance of the Mujahideen and its people forced the enemy to leave this area. As you can see, that’s the Islamic Emirate flag, the flag that thousands of Mujahideen shed their blood to raise.”

The crossing, in the Spin Boldak district south of Afghanistan’s main southern city Kandahar, is the landlocked country’s second busiest entry point and main commercial artery between its sprawling southwest region and Pakistani sea ports. Afghan government data indicate that the route is used by 900 trucks a day.

“Wesh, which has great importance in Afghan trade with Pakistan and other countries, has been captured by the Taliban,” said a Pakistani security official deployed at the border area.

Officials in Chaman said the Taliban had suspended all travel through the gate.

The Taliban have in recent days seized other major border crossings, in Herat, Farah and Kunduz provinces in the north and west. Control of border posts allows the Taliban to collect revenue, said Shafiqullah Attai, chairman of the Afghanistan Chamber of Commerce and Investment in the capital Kabul.

The Islamist militants, who ruled Afghanistan from 1996 until their ouster in 2001 by U.S. bombing following the Sept. 11, 2001 attacks on the United States, have since been fighting to topple the Western-backed government in Kabul.

U.S. President Joe Biden has announced he is pulling out all U.S. troops by August, and American forces left their main base in the country two weeks ago. Emboldened Taliban have been making a fresh push to surround cities and capture territory.

U.S. officials told Reuters the United States will send charter flights later this month to start evacuating around 2,500 Afghans who worked as interpreters for the U.S. government and whose lives are now at risk. The programme has been dubbed “Operation Allies Refuge”.

President Ashraf Ghani travelled to the northern province of Balkh on Tuesday to assess security after the Taliban pushed government forces out of several districts there.

Ghani, 72, met civilians and assured them that “the Taliban’s backbone will be broken” and government forces would soon retake areas lost to the militants, the Tolo News network reported.

In the western province of Herat, a security official said Taliban fighters had fired several mortars at the Salma Dam, a vital hydroelectric and irrigation project.

Officials at the National Water Affairs Regulation Authority appealed to the Taliban to treat the dam as a “national treasure (that) is the common property of all and should not be damaged in military conflict”.

Vice President Amrullah Saleh said the Taliban were forcing members of a small ethnic minority to either convert to Islam or leave their homes in the northern province of Badakhshan.

“These are minority Kerghiz who lived there for centuries…They are now (across the border) in Tajikistan awaiting their fate,” he said on Twitter.

The United Nations mission in Afghanistan said it was increasingly concerned about reports of rights abuses as the fighting spreads. “The reports of killing, ill-treatment, persecution and discrimination are widespread and disturbing, creating fear and insecurity,” the mission said in a statement.

Educated Afghans – especially women and girls who were barred from school and most work under Taliban rule – have voiced alarm at their rapid advance, as have members of ethnic and sectarian minorities persecuted under the Taliban’s severe interpretation of Sunni Islam.

Taliban spokespeople reject accusations that they abuse rights, and say women will not be mistreated if the Taliban return to power.

“The best way to end harm to civilians is for peace talks to be reinvigorated in order for a negotiated settlement to be reached,” the U.N. mission said.

The Taliban made a commitment to negotiate with their Afghan rivals as part of an agreement under which the United States agreed to withdraw. But little progress has been made towards a ceasefire in several rounds of talks in Qatar.

Senior politicians from Kabul were preparing to leave for Qatar for more talks this month as Western diplomats urged the rival sides to work towards a power-sharing agreement.