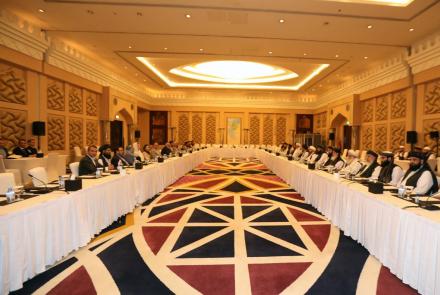 Peace delegations from the Islamic Republic of Afghanistan and the Taliban held a series of talks over the past few days with the talks reportedly focused on at least five key issues, including a future constitution, ceasefire, political roadmap and the political participation in the transition period, sources familiar with the process said.

Najia Anwari, a spokesperson for the State Ministry for Peace Affairs also said that serious discussions are taking place between the Afghan Republic and the Taliban negotiators in Doha in the past few days.

“These meetings are held after every single night between the two sides and the discussions are focused on a number of important issues,” she said.

The Taliban so far has not said anything about the topic.

Meanwhile, the US Special Representative for Afghanistan Reconciliation Zalmay Khalilzad has said that he was surprised by recent advances by the Taliban. However he added that a military takeover was not the solution to the conflict in Afghanistan.

“I’m not surprised that the conflict has intensified, but I am surprised by the progress that the Talibs have made and I’m hoping that the Afghan forces with help from their friends will find their bearing and push back. But again I repeat, there is no military solution,” said Khalilzad who architected a peace deal between the US and the Taliban in Doha last February.

“The Taliban know that they need to be accepted as part of the future of Afghanistan, not to be a pariah. To invade Kabul ans impose a government will put all the things they want internationally at risk. We will not recognize a government in Afghanistan that is imposed by force,” Khalilzad said.

The US State Department said that Khalilzad has started a new series of his trips to the region for Afghan peace.

“One of the key reasons for the situation that we face today is the unconditional withdrawal of foreign forces from Afghanistan,” said Mir Haidar Afzali, the head of the parliament’s defense committee.

Moreover, the US Serectary of State Antony Blinken after holding talks with his Pakistani and Qatari counterparts said that all these countries have a key role to play with regard to peace in Afghanistan.

“Without reaching an agreement with the Taliban, it would be difficult to bring peace in Afghanistan,” said MP Nematullah Karyab.

In the meantime, Turkish president Recep Tayyip Erdoğan has said that based on agreement with the US and NATO, Turkey will take responsibility of providing security to the Hamid Karzai International Airport in Kabul.