The Taliban’s spokesman in Doha, Mohammad Naeem, on Twitter said that the Taliban delegation will hold talks with the Iranian officials on bilateral issues. 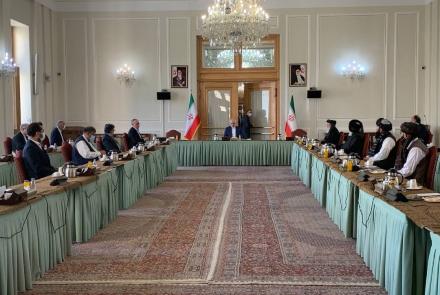 A Taliban delegation led by the group’s negotiator Shir Mohammad Abbas Stanikzai is in Tehran where the delegation met with Iranian Foreign Minister Mohammad Javad Zarif and other senior Iranian officials.

The Taliban delegation is also expected to meet with a group of Afghan politicians, led by former vice president Younus Qanooni, who have travelled there from Kabul.

The Taliban’s spokesman in Doha, Mohammad Naeem, on Twitter said that the Taliban delegation will hold talks with the Iranian officials on bilateral issues.

Meanwhile, Qatar’s Special Envoy to Afghanistan who arrived in Kabul on Tuesday met a number of senior Afghan political leaders including former president Hamid Karzai to discuss how to expedite the stalled Doha peace talks.

The delegation and Iranian officials will discuss the Afghan peace talks.

“We are very proud that we remained alongside our Afghan brothers and sisters during the jihad of the Afghan people against the foreign invasion,” said Iranian Foreign Minister Mohammad Javad Zarif in a meeting with the Taliban delegation in Tehran.

“The efforts by Iran are focused on promoting regional cooperation regarding the peace process and regional consensus and to pave the way for intra-Afghan talks among Afghan politicians in Doha,” said university lecturer Faiz Mohammad Zaland.

“The delegation which has travelled to Tehran is a small effort in this situarion, now lets see what comes out of this,” said Assadullah Saadati, deputy head of the HCNR.

According to the HCNR, peace negotiators in Doha are also expected to start serious talks about peace in the near future.

“The two sides are expected to talk about some serious issues, but these talks so far have not taken any clear direction,” said Assadullah Saadati, deputy of HCNR.