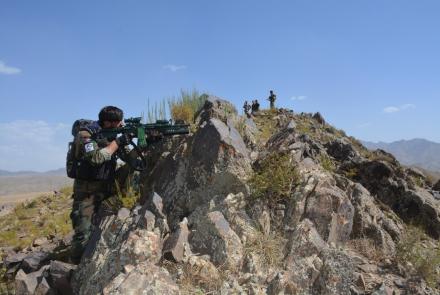 Afghan authorities claim that the Afghan National Security and Defense Forces (ANDSF) have killed over 6,000 Taliban fighters in approximately one month, and the Taliban has said that the group has also inflicted major casualties on government forces.

During this period the government also evacuated 120 districts following offensives by the Taliban.

In the latest development, the Taliban has captured the center of Tagab district in the northern province of Kapisa.

Numbers gathered by TOLOnews show that 638 military personnel and civilians were also killed in Taliban attacks during this period and 1,060 others were wounded.

“The main reason for the collapse of the districts is poor leadership at the leadership level of the security and defense forces,” said MP Khan Agha Rezayee.

Based on the figures, although the number of targeted attacks and explosions decreased during this period, the level of casualties among the security personnel and civilians continued to rise.

“The lines (personnel) of the war changed, people were serving in the provinces as security commanders who weren’t familiar with the war because the government had sent the war commanders home,” said MP Ibdallullah Mohammadi.

“There was no preparation to confront such a big war, we weren’t prepared for guerrilla warfare,” said MP Arif Rahmani.

Meanwhile, Afghanistan’s Ministry of Defense (MoD) said that the Afghan security forces have increased airstrikes on Taliban positions in Nangarhar, Herat, Balkh, Jawzjan, Helmand, Takhar, Badakhshan, Kunduz, Baghlan and Kapisa provinces in a move to recapture the districts lost to the Taliban.

“258 Taliban fighters were killed and 100 more were wounded in the operations conducted by the security and defense forces in the past 24 hours,” said Fawad Aman, deputy spokesman for the Ministry of Defense.

During a speech in Pakistan’s national assembly, he also criticized past policies that led to Pakistan’s joining the US intervention in Afghanistan.

“When we gave so many services, did they (US) praise us or acknowledge our sacrifices? Instead, they called us a hypocrite and blamed us. Instead of appreciating us, Pakistan was bad-mouthed,” he said quoted by Dawn news.

He mentioned that had never felt more “insulted” than when Pakistan decided to join the United States’s war on terror.

“We decided to become a front line state for the American war on terror. I questioned repeatedly, what did we have to do with the war?” he asked.

Khan said he wanted the nation to remember that period forever and the “idiocy” of the policies at the time.

“Does any country get involved in another’s (war) and lose 70,000 lives?” he asked. “What they (US) said, we kept doing. (Former president Pervez) Musharraf said in his book that he took money and sent people to Guantanamo.”