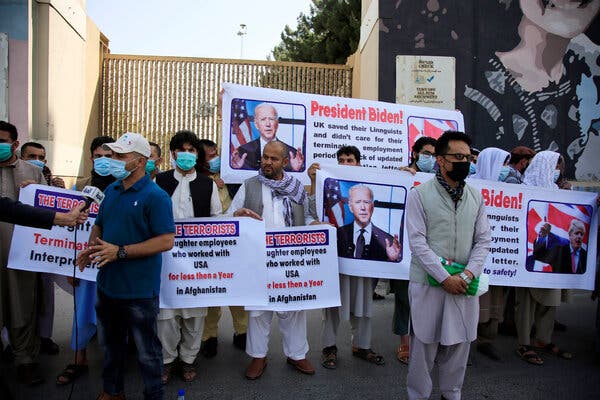 Rushing to help Afghans who face retribution for working alongside American troops in their home country, the House is scheduled to vote on Tuesday to speed up the process that would allow them to immigrate to the United States.

With the American military in the final phases of withdrawing from Afghanistan after 20 years of war, more than 18,000 Afghans who have worked as interpreters, drivers, engineers, security guards and embassy clerks for the United States are stuck in a bureaucratic morass after applying for Special Immigrant Visas, available to people who face threats because of work for the U.S. government.

The measure slated for a vote on Tuesday — the first in a package of bills that would smooth the visa process — would waive a requirement for applicants to undergo medical examinations in Afghanistan before qualifying. It aims to shorten the long wait for permission to enter the United States, which can be as long as six or seven years for some applicants.

Some of the “Afghan allies” awaiting visas have spoken out about the threats they face from the Taliban.

“This is a moral imperative for our nation,” said Representative Jason Crow, Democrat of Colorado, a former Army Ranger who is the lead sponsor of the bill. “We have to honor our promises to our partners. We’re going to debate Afghanistan for decades to come and what lessons we learned, but we do know we can do things with honor for the next few weeks.”

The measure is one of several being pushed by a bipartisan coalition of lawmakers, many of them military members or veterans who have worked with translators, drivers and fixers in Afghanistan and other combat zones.

The group has also pressured the Biden administration to carry out a mass evacuation of Afghans who are awaiting their visas, an idea that President Biden embraced last week, saying, “Those who helped us are not going to be left behind.”

But first, the Afghans must qualify for visas. Only one clinic in the country — a German facility in Kabul — does the medical examinations, requiring some people to travel long distances through dangerous conditions. And the exams are expensive, Mr. Crow said.

A separate bill introduced by the group would expand the universe of eligible Afghans by removing what its proponents call “burdensome” application requirements, including a “credible sworn statement” of a specific threat and proof of a “sensitive and trusted” job. Instead, it would in effect stipulate that any Afghan who helped the U.S. government by definition faced retribution and should be able to apply for a visa. The bill would also increase the number of visas available.

Since 2014, the nonprofit organization No One Left Behind has tracked the killings of more than 300 translators or their family members, many of whom died while waiting for their visas to be processed, according to James Miervaldis, the group’s chairman and an Army Reserve noncommissioned officer.

Biden administration officials have said they plan to relocate the Afghan allies outside Afghanistan, possibly to Guam, to await the processing of their visa requests.

The House plans a vote to speed visas for Afghans who helped the U.S. government.06.29.2021