“Security forces in Gurizwan evacuated the area due to a lack of communication,” said Abdul Ahad Elbek, a member of Faryab’s provincial council. 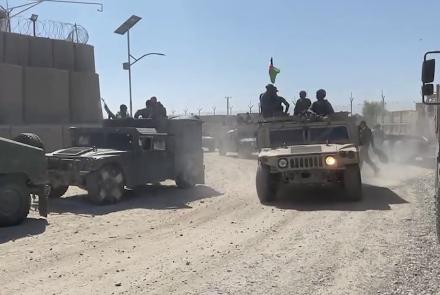 The Taliban have seized the centers of at least seven districts in Faryab, Baghlan, Uruzgan, Logar and Ghazni provinces in the past 24 hours, according to sources.

Three district centers (Bilchiragh, Qaramqol and Gurizwan) were taken in Faryab, Charchino in Uruzgan, Tala Wa Brafak in Baghlan, Qarabagh in Ghazni, and Azra in Logar.

During this period, the Afghan security forces also engaged in fierce battles with the Taliban in Kunduz city, Taluqan and Maimana, the provincial capitals of Kunduz, Takhar and Faryab, respectively.

According to sources, 300 soldiers were deployed in each of the fallen district centers.

“Security forces in Gurizwan evacuated the area due to a lack of communication,” said Abdul Ahad Elbek, a member of Faryab’s provincial council.

“We call on the central government to think about the areas lost,” said MP Hashmatullah Arman.

“In the present government, those who made sacrifices and worked hard haven’t been appreciated, they weren’t encouraged, the only people appreciated are the ones sitting in luxury offices,” said MP Assadullah Shahbaz.

A Logar provincial council member said that the Taliban has taken over the center of Azra district in Logar.

“The govt thought that the Taliban would try to take over eight strategic districts, but they changed their tactics and instead launched attacks on 200 fronts,” said MP Arif Rahmani.

With the announcement of the foreign troop withdrawal, the number of district centers that have fallen to the Taliban in the past two months has reached 80.