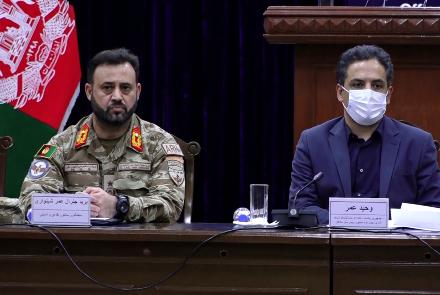 Following repeated attacks by the Taliban in various parts of the country, particularly in the north, President Ghani’s senior adviser Waheed Omer said on Tuesday that the group, with its attacks and “subversive” activities in the last month, has proved that it has not changed at all.

Addressing a gathering to introduce Brig. Gen. Ajmal Omar Shinwari as spokesman for the security and defense forces, Omer said that recent attacks by the Taliban have caused hopes for peace in Afghanistan to vanish.

Moreover, hundreds of tribal elders and locals have taken up arms, forming various groups in Parwan, Kapisa, Baghlan, Kunduz, Takhar and Balkh provinces to fight alongside security forces on the frontlines against the Taliban.

Some former mujahedeen leaders and residents of Jabal Siraj district in Parwan on Tuesday formed a social council of mujahedeen, warning that they will support the security forces on the frontlines if the Taliban violence continues.

In Kapisa, a central province that neighbors Parwan and is north of Kabul, a group of former mujahedeen commanders mobilized residents to arm themselves and defend their areas.

“The people are ready to go to the frontlines and fight international terrorism,” said Mohammad Husain Sanjani, the head of the Kapisa provincial council.

In Baghlan province in northern Afghanistan, a large number of locals have mobilized to fight the Taliban.

“Our personnel are on the frontlines. The personnel that you see here are the reserve forces,” said a public uprising forces commander in Baghlan.

This is the first time that the public has shown a willingness to fight against the Taliban in such large numbers since the group increased its attacks.

Ata Mohammad Noor, the head of the splinter faction of Jamiat-e-Islami Afghanistan, has pledged to mobilize the public in Balkh against the Taliban and to clear the province and restore stability.

Some are against the mobilization of the public, saying it will increase the violence.

“The mobilization of the people by politicians under the pretext of supporting security forces–with the use of public uprising forces–fuels the war from one side and from the other it affects Afghanistan’s stance in foreign policy,” said Habib-ur-Rahman Naqi, a member of the leadership council of Hizb-e-Islami.

This comes as President Ghani met with influential political leaders on Monday to mobilize politicians to build a national consensus to manage the current situation.