Putin said he hopes the US and NATO are able to maintain some peace and security in Afghanistan, according to Biden. 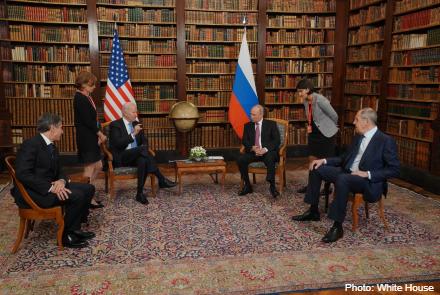 US President Joe Biden on Wednesday at a press conference in Switzerland after meeting with his Russian counterpart Vladimir Putin said that he discussed Afghanistan with the Russian president.

Biden said he expressed an “unwavering commitment to the sovereignty and territorial integrity of Ukraine” and discussed the US and Russia’s shared interest in preventing “a resurgence of terrorism in Afghanistan.”

A reporter asked Biden if he had put questions about Afghanistan to Putin, and Biden replied:

“No, he asked us about Afghanistan. He said that he hopes that we’re able to maintain some peace and security, and I said, ‘That has a lot to do with you.'”

“He indicated that he was prepared to, quote, ‘help’ on Afghanistan — I won’t go into detail now; and help on — on Iran; and help on — and, in return, we told him what we wanted to do relative to bringing some stability and economic security or physical security to the people of Syria and Libya,” he said.

“So, we had those discussions,” he added.

On Monday, Biden at a press conference after the NATO leaders’ summit in Brussels said “there was a strong consensus in the room, among the leaders, in that meeting, on Afghanistan,” and he reiterated that the alliance will continue its support to Afghans after the withdrawal of international troops from the country.

“Our troops are coming home, but we agreed that our diplomatic, economic, and humanitarian commitment to the Afghan people and our support for the Afghan National Defense and Security Forces will endure,” Biden said.

On Monday, the NATO leaders at the Brussels summit agreed to maintain funding for the Hamid Karzai International Airport in Kabul after the Resolute Support mission in Afghanistan ends.

NATO leaders in a statement issued from the Brussels summit affirmed their commitment to continue to stand with Afghanistan, its people, and its institutions in promoting security and upholding the hard-won gains of the last 20 years.

It added that NATO will retain a Senior Civilian Representative’s Office in Kabul to continue diplomatic engagement and enhance its partnership with Afghanistan.

Recognizing its importance to an enduring diplomatic and international presence, as well as to Afghanistan’s connectivity with the world, NATO will provide transitional funding to ensure continued functioning of Hamid Karzai International Airport,” said the statement.

“We will also step up dialogue on Afghanistan with relevant international and regional partners,” the statement said. “We continue to support the ongoing Afghan-owned and Afghan-led peace process, and call on all stakeholders to help Afghanistan foster a lasting inclusive political settlement that puts an end to violence; safeguards the human rights of Afghans, particularly women, children, and minorities; upholds the rule of law; and ensures that Afghanistan never again serves as a safe haven for terrorists.”