“Our support for the Afghan National Defense and Security Forces will endure,” President Biden said. 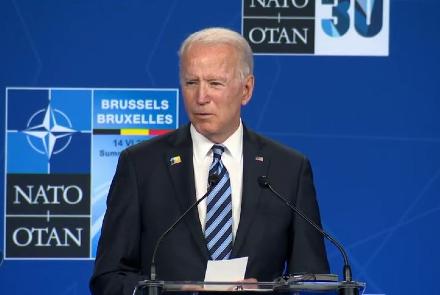 US President Joe Biden at a press conference after the NATO leaders’ summit in Brussels on Monday “there was a strong consensus in the room, among the leaders, in that meeting, on Afghanistan,” reiterating that the alliance will continue its support to Afghans after the withdrawal of international troops from the country.

“Our troops are coming home, but we agreed that our diplomatic, economic, and humanitarian commitment to the Afghan people and our support for the Afghan National Defense and Security Forces will endure,” Biden said.

On Monday, the NATO leaders at the Brussels summit agreed to maintain funding for the Hamid Karzai International Airport in Kabul after the Resolute Support mission in Afghanistan ends.

“NATO and allies are now working on how to ensure the continued operation of an international airport in Kabul. There were meetings also on the sidelines of the summit today. Turkey of course plays a key role in those efforts. We are working on exactly how to do it but there is a strong commitment from NATO and from NATO allies to ensure that we can operate an international airport,” he said.

NATO leaders in a statement issued from the Brussels summit affirmed their commitment to continue to stand with Afghanistan, its people, and its institutions in promoting security and upholding the hard-won gains of the last 20 years.

It added that NATO will retain a Senior Civilian Representative’s Office in Kabul to continue diplomatic engagement and enhance its partnership with Afghanistan.

“Recognizing its importance to an enduring diplomatic and international presence, as well as to Afghanistan’s connectivity with the world, NATO will provide transitional funding to ensure continued functioning of Hamid Karzai International Airport,” said the statement.

“We will also step up dialogue on Afghanistan with relevant international and regional partners,” the statement said. “We continue to support the ongoing Afghan-owned and Afghan-led peace process, and call on all stakeholders to help Afghanistan foster a lasting inclusive political settlement that puts an end to violence; safeguards the human rights of Afghans, particularly women, children, and minorities; upholds the rule of law; and ensures that Afghanistan never again serves as a safe haven for terrorists.”