Mr. Biden and his top national security aides had previously suggested that once U.S. troops left Afghanistan, air support would end as well, with the exception of strikes aimed at terrorist groups that could harm American interests.

But military officials are actively discussing how they might respond if the rapid withdrawal produces consequences with substantial national security implications.

No decisions have been made yet, officials said. But they added that one option under consideration would be to recommend that U.S. warplanes or armed drones intervene in an extraordinary crisis, such as the potential fall of Kabul, the Afghan capital, or a siege that puts American and allied embassies and citizens at risk.

Any additional airstrikes would require the president’s approval. Even then, officials indicated that such air support would be hard to sustain over a lengthy period because of the enormous logistical effort that would be necessary given the American withdrawal. The United States will leave all its air bases in Afghanistan by next month, and any airstrikes would most likely have to be launched from bases in the Persian Gulf.

A potential fall of Kabul is the crisis most likely to lead to military intervention after U.S. troops leave, officials said. Intervening to protect Kandahar, Afghanistan’s second-largest city, would be far less certain, one official said. Encroaching Taliban forces have increasingly threatened several other urban hubs in almost every corner of the country in recent months.

The discussion suggests the degree of concern in Washington about the ability of Afghanistan’s military to hold off the Taliban and maintain control of Kabul and other population centers.

And it is the latest indication of the scramble by the United States to address the ramifications of Mr. Biden’s decision in April to order a full withdrawal — a goal that had eluded his two immediate predecessors, in part because of opposition from the military.

Whether to provide air support to Afghan security forces after U.S. troops pull out is one of several major questions about Afghanistan policy that the administration is grappling with as Mr. Biden prepares to meet NATO allies in Europe next week.

Also unresolved is how U.S. troops will carry out counterterrorism missions to prevent Al Qaeda and other militants from rebuilding their presence in Afghanistan, and how to allow Western contractors to continue to support the Afghan military. At the same time, the C.I.A. is under intense pressure to find new ways to gather intelligence and carry out counterterrorism strikes in the country.

With the Pentagon set to conclude the pullout of U.S. troops by early July, the Afghan military — created, trained and supplied in the image of the American military — is supposed to start defending the country on its own.

Senior American officials say that the immediate crumbling of the Afghan military is not a foregone conclusion. But there is little doubt that the Afghan forces are battered and at risk of being overwhelmed, especially if their commandos and air forces falter.

The United States is not likely to provide additional air support to Afghan forces in rural areas, many of which are already under Taliban control, the officials said. And even government enclaves around the country, which are already under siege, are unlikely to receive much military help from American warplanes, the officials said. They spoke on the condition of anonymity to avoid speaking publicly about internal administration discussions. 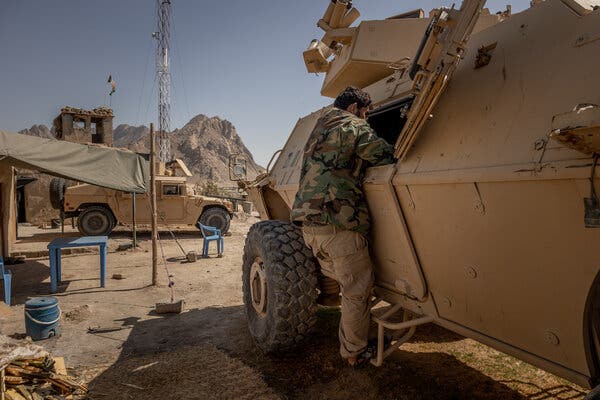 When Mr. Biden announced the withdrawal in April, he promised to support the Afghan government, including its security forces; but he appeared to indicate that the Afghans would be on their own militarily after American and NATO troops left this summer. “While we will not stay involved in Afghanistan militarily, our diplomatic and humanitarian work will continue,” he said at the time.

Officials said then that the United States would launch strikes in Afghanistan only for counterterrorism reasons, in case there was intelligence about efforts to attack American interests.

A spokesman for the White House’s National  Council declined to comment on the options under discussion, saying the administration did not publicly discuss rules of engagement.

Asked on Thursday about The Times article at a Senate hearing, Defense Secretary Lloyd J. Austin III declined to comment on any future combat operations in Afghanistan.

Mr. Austin said that the United States is providing some air support to Afghan security forces now, during the American troop withdrawal, but once the pullout is complete, he said further support would be “very difficult to do” because American warplanes and armed drones would be out of the country.

But officials say there appears to be some new flexibility in the interpretation of counterterrorism. They say a debate has risen in the administration over what, exactly, is the threshold for turmoil in Afghanistan that could lead to American airstrikes.

The discussion reflects lessons learned from the rise of the Islamic State in Iraq, which forced the Obama administration in 2014 to recommit troops and air cover to defend Iraqi cities as the group encroached on Baghdad.

Senior officials said that at the moment, that threshold looked like a looming fall of Kabul, a situation that would most likely require a signoff from the president before American warplanes — most likely armed MQ-9 Reaper drones but possibly fighter jets — provided air support to Afghan forces.

Afghan officials said they had been told by their American counterparts that the United States would also stop any takeover of major cities, a vague statement without any clear backing.

That support would be tough to maintain over any extended period.

“It’s a very hard thing to do,” said Gen. Joseph L. Votel, the former commander of United States Central Command. “It’s an operation to get aircraft to Afghanistan, especially if you’re having to come from the Gulf or an aircraft carrier. There is limited loiter time for them to do anything.”

There are already signs of the difficulties that the United States would face in sending crewed aircraft to carry out strikes after the withdrawal. As U.S. bases in Afghanistan close, it has left pilots with a conundrum: What if something goes wrong thousands of feet over Afghanistan?

Forward Operating Base Dwyer — a sprawling complex in the south with a sizable landing strip — is closing in weeks, if not days. At that point, U.S. aircraft will have only one viable American military base, Bagram, to divert to if they face a mechanical or other issue in flight. Bagram will shut down when the withdrawal is complete.

With restrictive rules of engagement that require hours of overhead surveillance before an American airstrike is authorized, Afghan forces have tried to compensate, launching 10 to 20 airstrikes a day. U.S. surveillance drones are providing a wealth of coordinates to the Afghan Air Force, but Afghan pilots and aircraft are facing burnout and maintenance issues that grow by the day as foreign contractors withdraw.

“Our policy should be to do everything possible, consistent with not having troops on the ground, to enable the legitimate Afghan government and security forces to hold on,” said Representative Tom Malinowksi, Democrat of New Jersey and a former State Department official.

Mr. Malinowski last month joined more than half a dozen other House Democrats and Republicans in urging Mr. Biden to provide an array of support to the Afghan government after American troops leave, including any information on impending Taliban attacks detected by U.S. surveillance aircraft and spy satellites.

Top American generals have acknowledged that the Afghan security forces could collapse in a year or two, or even a matter of months, after the departure of Western military support.

Gen. Mark A. Milley, the chairman of the Joint Chiefs of Staff, offered reporters traveling with him last month a lukewarm statement about the abilities of the Afghan forces. After 20 years of war, thousands of casualties and huge sums of money spent on the Afghan military and police, he characterized them as “reasonably well equipped, reasonably well trained, reasonably well led.”

When pressed on whether he thought the Afghan forces could hold up, General Milley was noncommittal.

“Which one of these options obtains and becomes reality at the end of the day?” he said. “We frankly don’t know yet.”

When asked at a Pentagon news conference last month if Afghan cities were in danger of being overrun by the Taliban after American forces left, Mr. Austin declined to say whether the United States would provide air support, saying it was a hypothetical situation.

Zalmay Khalilzad, the top U.S. diplomat leading peace efforts with the Taliban, issued last month what seemed to be a definitive statement on the matter.

“We will do what we can during our presence until the forces are withdrawn, to help the Afghan forces, including coming to their defense when they are attacked,” he told the House Foreign Affairs Committee. “But once we are out of Afghanistan, direct military support of Afghan forces such as strikes in support of their forces, that’s not being contemplated at this time.”

But three other American officials said the issue had not been resolved in high-level administration meetings on Afghanistan.