Imran Khan said it is not going to be easy to get concessions from the Taliban after the US decision. 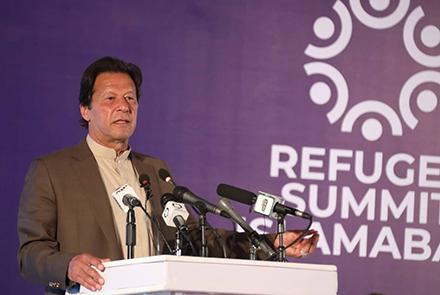 Pakistan Prime Minister Imran Khan has said that his country is pushing for a political settlement in Afghanistan before international troops leave later this year to reduce the risk of civil war in its western neighbor.

US President Joe Biden announced in April to withdraw all American troops from Afghanistan by Sept. 11. The announcement was followed by concerns about the political future of Afghanistan.

Pentagon officials have said that one-quarter of the withdrawal has been completed. The US forces have handed some bases to Afghan forces, including the New Kabul Compound, known as NKC, in Kabul.

“There is a lot of fear right now in Pakistan and I assure you that we are trying our level best that there is some sort of political settlement before the Americans leave,” Khan said in an interview with Reuters on Friday.

Violence has remained high in Afghanistan despite a three-day ceasefire from May 13 to May 15 during the Eid days. Security officials reported clashes between government forces and the Taliban in at least 10 provinces on Friday.

“Since the moment the Americans gave a date, of when they were going to leave Afghanistan … the Taliban feel they have won the war,” Khan said as quoted by Reuters.

He added that it is not going to be easy to get concessions from the Taliban after the US decision.

The peace negotiations in Doha have had no progress following the US announcement of withdrawing its troops from Afghanistan. The majority of the Afghan Republic negotiators returned to Doha last week with the hope to resume the stalled talks with the Taliban.

Khan said Pakistan would suffer the most, after Afghanistan itself, if there was civil war and a refugee crisis.

“And then there would be pressure on us to jump in and become a part of it,” Khan said as quoted by Reuters.

He said his government had changed Pakistan’s decades-long policy of pushing for “strategic depth” in Afghanistan to ensure that there was a friendly government there.

President Ashraf Ghani on various occasions last month reiterated that it is time for Pakistan to choose its path when it comes to its relations with Afghanistan, stressing the need for Islamabad’s practical steps to support the Afghan reconciliation process.

Pakistan Foreign Minister Shah Mahmood Qureshi in a virtual speech to the European parliament last week said that there are people within Afghanistan who want to disrupt the peace process in the country.

Meanwhile, in his meeting with Tajikistan’s President Emomali Rahmon last week in Islamabad, Qureshi repeated his allegation, stating that there are people inside the country who try to disrupt peace.

Responding to these remarks, Afghanistan’s Ministry of Foreign Affairs said Friday that the spoilers of peace are those who have rejected the Afghan people and the international community’s call by continuing violence.

Blaming will not prove constructive at this sensitive juncture and peace in Afghanistan that is in favor of countries in the region, especially Pakistan, cannot be ensured by issuing statements and remarks, the ministry said.