The Republic negotiators said they discussed the resumption of the negotiations and the details of continuing the talks. 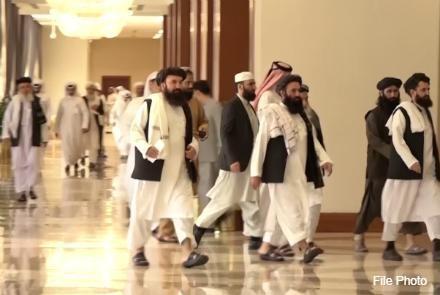 Some negotiators of the Islamic Republic of Afghanistan and the Taliban held a meeting in Doha on Sunday–their latest since May 13–amid the stalled peace efforts that have shown no progress over the last two months after the announcement of US withdrawal from Afghanistan.

Shaikh Abdul Hakim Haqqani, the head of the Taliban’s negotiating team, also attended the meeting, according to sources in Qatar. This follows his one-month consultation with Taliban leadership in Pakistan. He returned to Doha from Islamabad on Friday, sources said.

The Republic negotiators confirmed their meeting with the Taliban and said they discussed the resumption of the negotiations and the details of continuing the talks.

Republic negotiator Ghulam Farooq Majroh, who is in Afghanistan, said the meeting is a sign of improvement toward further peace negotiations.

The negotiations in Doha were stopped after US President Joe Biden announced an extension on the May 1st deadline for the full withdrawal of US and coalition forces from Afghanistan.

Also, the Taliban chose not to participate in a UN-led conference in Turkey.

“We have not left negotiations. We are here (in Doha). Some issues that happen in the political arena have no relation with the Islamic emirate of Afghanistan,” Taliban spokesman in Doha, Mohammad Naeem, said.

The two sides are opting to resume the negotiations as heavy fighting is ongoing between security forces and the Taliban in the last two weeks, letting up only for the three days of the EID ceasefire between May 13 and May 15.

“The ordinary people suffer the most sacrifice. What happened in Narkh? What happened in Jalrez? What is happening in other areas? The only way forward for both sides is to attend the intra-Afghan negotiations,” said Mohammad Amin Waqad, former deputy head of the High Peace Council.

Along with Doha, efforts are also reportedly underway in Pakistan to aid Afghan peace process.

Former president Hamid Karzai in an interview with Der Spiegel was asked about an upcoming conference in Pakistan where President Ashraf Ghani is expected to meet Taliban leader Mullah Hebatullah Akhundzada for the first time. Karzai said nothing is official yet, but he added “we would welcome such a proposal with the utmost interest.”

Karzai said, “At the same time, we have high hopes for the so-called Troika plus, a diplomatic initiative launched by Russia, which also includes China and the United States.”

Moreover, Russia’s Sputnik has reported that Russian Foreign Minister Sergey Lavrov has said that the “monopolization” of power by the Taliban in Afghanistan is not acceptable for his country.