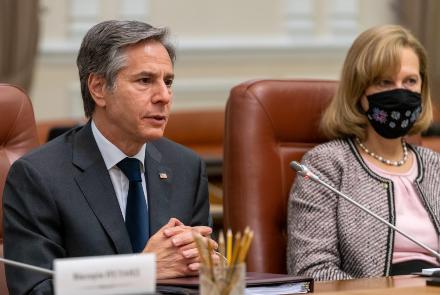 The US Secretary of State Antony Blinken on Friday spoke with Afghan President Ashraf Ghani on phone and the two sides discussed the regional efforts to advance the Afghan peace process and the recent waves of violence including the attack on Sayed Al-Shuhada school that killed over 60 students and wounded 150 more.

Secretary Blinken conveyed Eid greetings and expressed his deepest condolences to the families of those lost in recent violence in Afghanistan, including in the horrific attack on a girls’ school in Kabul last week, the US State Department said in a statement.

The statement said “the Secretary conveyed America’s steadfast support for the US-Afghan partnership and for Afghanistan’s security forces.”

the two leaders discussed the importance of national unity in Afghanistan at this time as well as regional efforts to advance the peace process, the statement said.

“We support our partnership and Afghan security forces,” Blinken tweeted after phone call with Ghani.

Meanwhile, negotiators from the Islamic Republic of Afghanistan and the Taliban met in Doha on Friday and discussed the expedition of peace efforts.

Abdul Salam Rahimi and Fatima Gailani represented the Islamic Republic of Afghanistan during the talks.

Taliban delegation was chaired by Mullah Abdul Ghani Baradar in the meeting.

This new development takes place at a time that a temporary ceasefire is in place for the last two days amidst calls for its extension after Eid.

Both the Afghan government and the people as well as the international community have been pressing the Taliban to agree on a long-term ceasefire. The Taliban has not accepted the proposal and instead has come up with some preconditions for it.

In the latest incidents of violence, at least 12 people were killed and 15 more were wounded in an explosion inside a mosque in Shakar Dara district north of Kabul on Friday afternoon, police said in a statement.

As well as on Thursday, at least nine people were killed in different acts of violence in the country.

“My condolences to the families of the over 20 civilians who were killed in attacks nationwide during this Eid ceasefire. Afghans need a comprehensive ceasefire now,” US Chargé d’Affaires Ross Wilson tweeted.

Officials on Friday reported ceasefire violations by the Taliban in at least two provinces in which as many as three soldiers were killed and a few more were wounded.

Uruzgan governor Mohammad Omar Shirzad said that the Taliban “violated” ceasefire in two places in the province today in which some security force members have been killed and wounded.

“One of the incidents happened in Kandahar-Uruzgan highway in which Taliban opened fire on security forces convoy in which we some were wounded and one was martyred,” he said. “Another attack by Taliban happened on Shaheed Amrullah Base in Tarinkot city, the center of Uruzgan, in which one soldier was martyred and one was wounded.”