“If the consensus is limited to the meeting of a few political leaders, this can’t be evaluated as a solution,” said political analyst Wais Naseri. 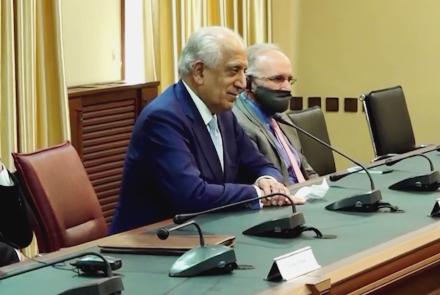 The US Special Representative for Afghanistan Reconciliation Zalmay Khalilzad has said that a Taliban plan to seize control of Afghanistan with a military takeover would not be acceptable to the world.

According to a statement from the US embassy, Khalilzad “emphasized that there was strong consensus within both the regional and international community against any effort by the Taliban to pursue a military takeover. Only a negotiated settlement can end over 40 years of war in Afghanistan and Ambassador Khalilzad pledged common cause with Afghan leaders to accelerate efforts to reach an inclusive settlement and permanent and comprehensive ceasefire.”

Meanwhile, President Ashraf Ghani has said that with the completion of the withdrawal of foreign forces, all decisions regarding the country will be taken by the Afghan people and the government. He again called on the Taliban to surrender to peace.

He said that the Afghan government is ready for all scenarios if provoked.

“Now that the foreign forces are leaving, all national decisions will be taken by the Afghan people and the government,” said Ghani, amid rumors about the release of the remaining Taliban prisoners from the Afghan government jails.

Meanwhile, a member of the High Council of National Reconciliation (HCNR) who met Khalilzad in Kabul said that in the meeting discussions were held about the success of the upcoming UN-led summit on Afghanistan in Turkey.

“He (Khalilzad) stressed the importance of the existence of the system, the protection of the security forces and the army,” said Haji Din Mohammad, a member of the HCNR.

“If the consensus is limited to the meeting of a few political leaders, this can’t be evaluated as a solution,” said political analyst Wais Naseri.

Meanwhile, President Ashraf Ghani in an article in Foreign Affairs said that the Afghan government respects the decision of US President of Joe Biden about withdrawing troops from Afghanistan and views it as a moment of both opportunity and risk for itself, for Afghans, for the Taliban, and for the region.

“For me, as the elected leader of the Islamic Republic of Afghanistan, it is another opportunity to reiterate and further my commitment to peace,” wrote Ghani.

Ghani also said that his government remains ready to continue talks with the Taliban and, if it meant peace would be secured, he would be willing to end his term early.

On the US forces’ withdrawal, he said: “For the Afghan nation, the announcement of the U.S. withdrawal is another phase in our long-term partnership with the United States. Afghanistan has been through consequential withdrawals before.”

“The US decision surprised the Taliban and their patrons in Pakistan, and it has forced them to make a choice. Will they become credible stakeholders, or will they foster more chaos and violence? If the Taliban choose the latter path, the ANDSF will fight them. And if the Taliban still refuse to negotiate, they will be choosing the peace of the grave,” said Ghani in his article.

Ghani said that Afghans cannot and absolutely will not go back to the horrors of the 1990s.

US: Strong Intl Consensus Against a Taliban Military Takeover05.04.2021