The Afghan peace process and the release of Taliban prisoners were discussed in the meeting. 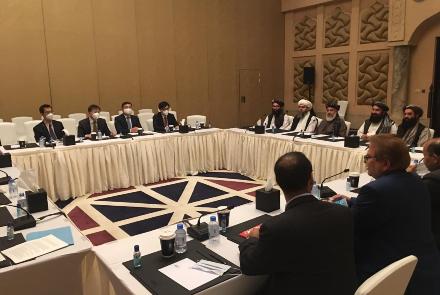 Envoys from the United States, Russia, China, and Pakistan as well as Taliban negotiators held a meeting in Doha on Friday with the main focus on the Afghan peace process.

The discussions focused on the peace process, Afghanistan’s situation, the release of Taliban prisoners and the removal of their leaders’ names from the blacklist, Taliban spokesman Mohammad Naeem said.

He said that all sides agreed that practical work should start on removal of the names from the blacklist.

Republic negotiator Fawzia Koofi said that achieving peace will not be easy in the absence of a sincere role by Pakistan.

“Our hope is that we get the support of the international community, mainly the region, and mainly our dear friend Pakistan, to use their leverage to bring the Taliban to the table of negotiations for meaningful negotiations,” Koofi said at an online session on Thursday.

US special envoy Zalmay Khalilzad separately met with the Afghan republic and Taliban negotiators in Doha on Thursday.

“It was stressed that the peace process should further be accelerated. Also in the meeting, Mr. Khalilzad reassured United States’ continued support to Afghanistan,” said Habiba Sarabi, a republic peace negotiator.

Representatives of the four countries met last month and said in a joint statement that the return of an Islamic emirate is not acceptable.

They also called on the Afghan government and the High Council of National Reconciliation to enter into meaningful dialogue with the Taliban to end the conflict.

“They will convince the Taliban. But it is not possible that a government is established in absence of the participation of the Taliban,” said Sayed Akbar Agha, a former Taliban commander.

“If these countries act with honesty, they can expedite the Afghan peace process in the view of their role in it as key players,” Said political analyst Nasrullah Stanekzai.