Taliban says they seek an Islamic system in which women’s rights, as understood by Islam, are protected. 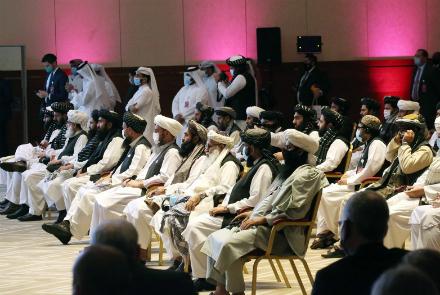 At a time of growing concerns over the future of the nascent democracy in Afghanistan in a potential peace agreement with the Taliban, the group on Friday in a statement explained their perception of an Islamic political system, emphasizing the need for the implementation of Islamic laws and jurisprudence.

Taliban in its statement said that only the restoration of a true Islamic system can ensure a prosperous and successful future for Afghanistan.

The statement reveals that the Taliban wants a system in which “a murderer is subjected to Qisas (retaliation in kind), a fornicator is subjected to Hadd (punishments that are mandated and fixed by God), a thief is punished, an oppressor’s hand is restrained from oppression, the oppressed are granted relief from injustice, one who accepts bribery is punished and the public treasury is kept safe from evildoers.”

The statement also says that the Taliban does not want a democratic system in which “President of the country serves to guarantee the interests of Washington and foreigners enter the country without a pre-information notification or protocol.”

On women’s civil liberties and rights, the statement that the group seeks an Islamic system in which women’s rights, as understood by Islam, are protected.

It further elaborates that they support an Islamic system in which among other rights, women have their share in inheritance, are not given away to settle murderous feuds, possess the right to marry and of choice in husband, and “those who slander chaste women are lashed and that she can serve her society in education, business, health and social fields while maintaining the correct Islamic hijab.”

The statement says that Taliban does not desire democracy “where the civil and military authorities of invading countries arrive without the knowledge of the President, demand a military base and position him as a soldier in the line.”

The statement comes in response to calls for explanation on the Taliban’s perception from an Islamic system.

People who have lived in areas under the Taliban influence said girls cannot go to school in those areas and that they can hardly see change in the Taliban’s mindset when compared to the time when they ruled Kabul in late 1990s.

“Our young girls cannot go to schools. There has been no change in the Taliban over the past ten or twenty years,” said a resident of Qochi village in the city of Kunduz that has been under Taliban influence for a while.

“I am from Chahar Dara (district in Kunduz). There is no security. They (Taliban) do not allow us to go out without guardian. They organize kangaroo courts there,” said a resident of Chahardara district in Kunduz.

“There are torture, beating and everything. It is 17 years that we are not able to return to Shirzad district in Nangarhar because of the torture and oppression of the Taliban,” said Faraz Khan Shirzad, a peace activist.

“There is a need for an intra-Afghan agreement which could ensure our culture, traditions, sanctuaries and all other international standards,” said Amanullah Tarin, a peace activist.

Under the US-Taliban peace agreement signed between the two sides last February, the US forces committed to leave the country by May 1, but the Biden administration announced that the troops will leave the country on Sept. 11. So far, it is not clear what the Taliban will decide once the May deadline ends.

“We need to have our own strategy because it is our country. The question that which country will stand with us and cooperate with us regarding the elimination of threats, it is a separate discussion,” said Ahmad Zia Saraj, the head of the National Directorate of Security.

Sources close to the Taliban said last week that Taliban chief negotiator Abdul Hakim has traveled to Pakistan from Doha to consult and seek guidance from leadership of the group and find out whether the delay in the withdrawal of US forces will lead to a halt in the talks and Istanbul conference, or if there are other ways to proceed.

Taliban Explains Their Perception of an Islamic System04.24.2021