Kabul is also one of the provinces where there are families who have been hit hard by poverty and economic crisis. 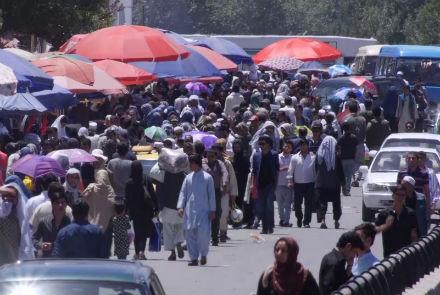 The International Federation of Red Cross and Red Crescent Societies (IFRC) announced that urgent action is needed to avert a deepening crisis in Afghanistan as one third of the country’s population is going without adequate food due to a worsening drought crisis.

“The drought and food crisis is one of the worst suffered in Afghanistan in recent decades, as 13.1 million people are grappling with food shortages according to the latest food insecurity analysis,” IFRC said on Tuesday.

Alongside other provinces, Kabul is also one of the provinces where there are families who have been hit hard by poverty and economic crisis.

Parwin and her children are among those families who are coping with poverty and economic crisis in Kabul.

“Sometimes we had no bread to eat, when my children see other people buying fruits and meat, my children ask for food, then I tell them to be patient,” said Parwain, the mother of five children in Kabul.

Fatima is an Afghan girl who is only 13 years old and working on the streets to help her family.

“We don’t want our mother to die, she is everything for us,” she said.

Afghan government statistics show that almost half of the Afghan population live below the poverty line.

Herat, Badghis, Farah, Nimroz, Jawzjan and Sar-e-Pul are among the provinces affected by drought this year.

“The level of poverty for (2020) is predicted around 47.1 percent while the inflation rate is around 2.3 percent,” said Roeena Shahabi, a spokeswoman for the National Statistic and Information Authority.

According to IFRC, this acute food security crisis compounds social and economic hardships already faced by millions of people in Afghanistan due to the COVID-19 pandemic and years of conflict.

“In the past month, Afghan Red Crescent volunteers and response teams have urgently ramped up relief, including food and cash assistance for thousands of drought-affected families across the parched provinces of Badghis, Baghlan and Faryab,” said Mobarez.

Necephor Mghendi, IFRC’s Head of Delegation for Afghanistan, said: “This is one of the worst ever droughts in Afghanistan and millions of people are barely surviving. People are walking long distances, as drinking water is running out and crops are failing.

“We have grave fears for more than 18 million people who will need humanitarian support in Afghanistan this year due to this drought-driven food crisis piled on top of the debilitating social and economic impacts of COVID-19 and the long-running conflict,” said Necephor Mghendi, IFRC’s Head of Delegation for Afghanistan.

“We are appealing for urgent action to help the Afghan people in this hour of extreme need. Millions of people urgently need more food, water and cash assistance to survive. We are revitalising drought-resistant crops and diminished livestock, while supporting income generation for women and other population groups most at risk,” he said.

“The situation in Afghanistan is worse, there is no business, people need assistance,” said Mohammad Jan, a street vendor in Kabul.