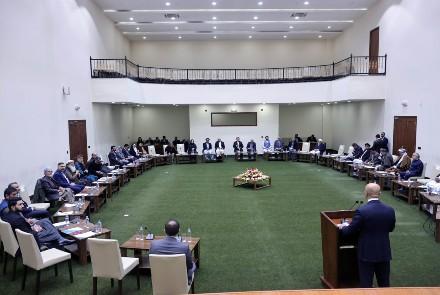 A 15-member committee of political leaders will be briefed on Saturday on the results of a review of the US-proposed peace plan for Afghanistan by various parties collected by the State Ministry for Peace Affairs, two members of the High Council for National Reconciliation said on Friday.

The political leaders are expected to meet Saturday as part of the leadership committee of the High Council for National Reconciliation. Further review will be done by the 15-member team that is led by former vice president Mohammad Younus Qanooni, the council members said.

The results of the review will be handed to the High Council for National Reconciliation and the council will present them at the upcoming UN-led conference in Turkey, a member of the council, Atta-ur-Rahman Salim said.

The plan was first shared with Afghan leaders early in March. The guiding principles for Afghanistan’s future, the structure of a transitional government, and a political roadmap for a lasting ceasefire are the three significant elements of the plan.

Other key components of the US peace plan are a UN-led conference on Afghanistan as well as a transitional or interim setup to move the stalled peace process forward.

“The politicians should attend the Istanbul conference with a unified agenda and a unified plan,” said Ismail Khan, a member of the reconciliation council.

“The upcoming conference will be of great significance. First, it is inclusive, and all parties are set to participate in it. The former president will participate at any meeting that is for the interest of the country,” said Shahzada Massoud, a senior adviser to former president Hamid Karzai.

The efforts come as the Afghan republic and the Taliban negotiators as well as representatives from the US are busy in consultations on the Turkey conference.

Sources close to the Taliban said the US continues to push for a three-month extension of the May 1 deadline for withdrawal of its troops from Afghanistan.

“Discussions are underway between representatives from the United States, Turkey and Qatar, including the United Nations and those countries supporting the Afghan peace process with the peace negotiating teams,” republic negotiator Ghulam Farooq Majroh said. “The discussions are aimed at bridging the gaps and bringing ideas closer ahead of the Turkey conference.”

“The US, the UN and the European Union, as well as countries in the region, should guarantee the implementation of this process in order to find a solution to the ongoing conflicts in Afghanistan,” a university lecturer Faiz Mohammad Zaland said.

Meanwhile, Russian Special Envoy for Afghanistan Zamir Kabulov and Foreign Minister Sergey Lavrov are expected to visit Afghanistan and Pakistan next week where they will discuss regional issues and the Afghan peace process with the stakeholders in the region.

Pakistan’s parliament speaker Assad Qaisar in a meeting with the Afghan ambassador to Islamabad has said that Pakistan will continue supporting an Afghan-owned and Afghan-led peace process.

Some MPs and analysts at an event on Friday said that the ongoing peace process is fragile and that there is a lack of a genuine will to end the ongoing violence in the country.

The analysts said they are not sure that the warring parties are sincere when it comes to peace efforts.