“Everyone recognizes that there is no military solution to Afghanistan,” US Secretary of State Antony Blinken said. 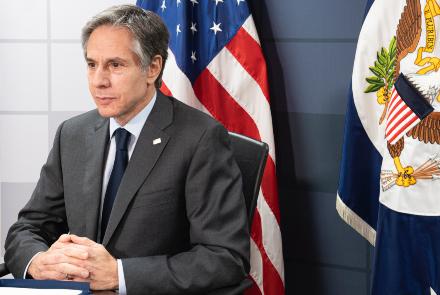 US Secretary of State Antony Blinken has reiterated that there has to be “some kind of political settlement in Afghanistan” and that it should be done by Afghans themselves.

“It was also very important to try to accelerate the diplomacy because ultimately everyone recognizes that there is no military solution to Afghanistan,” Blinken said in an interview with CNN.

He said that the US and NATO have been clear on their approach towards Afghanistan.

“We went in together, we’ve adapted to circumstances together and we will come out together when the time is right,” he said.

“One of the things that was important was not only to share our thinking as we’re going through this review, including the May 1 deadline but to listen, to hear from our partners who are so invested: their ideas, their thoughts, their analysis,” Blinken said.

While the US agreed to a May 1 withdrawal deadline as part of a diplomatic agreement reached with the Taliban last year, President Joe Biden said at a Wednesday press conference that the date would be “hard to meet” for “tactical reasons”.

In response to Biden’s statement, the Taliban in a statement on Friday warned that delay in American forces’ presence in the country will be seen as the violation of the Doha agreement and that all future responsibility for the continuation of violence will be on those who violate the deal.

The Taliban said they remain committed to the agreement, calling on the US to stay committed to the deal and avoid wasting this historic opportunity “for flawed advice and incitement by warmongering circles.”

Abdullah Abdullah, head of the High Council for National Reconciliation, said that the upcoming conference in Turkey is a unique opportunity for peace and that he hopes it will help form an agreement on ceasefire in the country.

Abdullah, who was in France this weekend, said in an interview with France 24 that he hopes all sides will take advantage of the opportunity provided by the conference.

“My hope is, my desire is, that we make maximum use of every opportunity which is there. Turkey will be a unique opportunity after quite a while, but it depends on both sides. I cannot call all the shots,” Abdullah said. “As far as our delegation which will participate … they will go with the firm resolve to contribute to the success of that process so the Turkey meeting will be considered a big step forward,” Abdullah said in the interview.

Abdullah said that the US-proposed peace draft has been shared with Afghan leaders and that he has not rejected the idea of a participatory setup.

“We have not rejected the idea of power-sharing arrangement. We are ready to talk about it. And the next proposal, whether it is acceptable to the Taliban or not, of course, remains to be seen. And if Taliban agree for early elections, we’re ready for that,” Abdullah said.

This comes as US special envoy Zalmay Khalilzad has departed for Turkey–and the region–in a push to encourage Afghan parties to accelerate negotiations to end the conflict in the country, the US State Department said on Saturday as quoted by Reuters.

“Khalilzad is busy on trips to make the Turkey conference fruitful for Afghanistan, the US and the World,” said Wais Naseri, an international affairs analyst.

The Turkey conference is expected to be held in early April. So far, the Afghan government and the Taliban have not stated who will represent them at the summit.

On Saturday, the National Security Adviser Hamdullah Mohib warned that Afghanistan could slide into a civil war if the US withdraws its forces without a peace agreement.

He reiterated that the Taliban will not succeed to take over the power through military pressure and war.

The Taliban’s negotiators so far have not offered any roadmap for peace and that they do not have the authority to decide on war and peace, Mohib said.

“If the Taliban feels that there will be chaos here and they will achieve power, this is their miscalculations because no one supports the return of the Taliban,” Mohib added.

Referring to the upcoming UN-led conference on Afghanistan in Turkey, Mohib said that the conference will not yield an outcome unless it is attended by an authorized Taliban delegation that has the decision-making authority.

US intelligence agencies have told the Biden administration that the Taliban could overrun most of Afghanistan within two to three years if US troops leave before a power-sharing deal is reached between the warring sides, a news report said on Friday.

Such a takeover potentially would allow al Qaeda to rebuild in Afghanistan, the New York Times reported, quoting anonymous US officials.