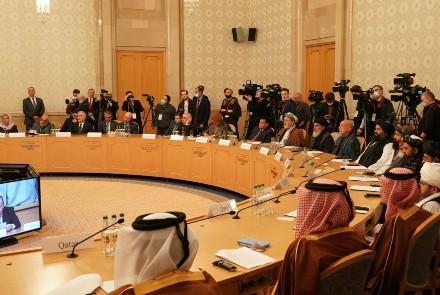 Zamir Kabulov, the Russian president’s envoy for Afghanistan, said that the Taliban during the Moscow meeting insisted on the restoration of the Islamic emirate as part of the solution to the conflict.

“The Taliban’s delegation insisted that it’s (restoring an Islamic Emirate in Afghanistan) a possible solution in Afghanistan. Their opponents disagreed,” said Kabulov.

Kabulov said that Russia is satisfied with the results of the Afghanistan peace conference that Moscow hosted last week and urged the US to comply with agreements to withdraw its troops from the country by May 1.

“The aim of this meeting was to give an impulse to the stalled intra-Afghan talks in Doha. I think this aim was accomplished,” said the Russian envoy as quoted by the AP.

According to the report, the Taliban representatives said during talks they were firm on their demand for an Islamic government, without elaborating on what an Islamic government would look like or whether it would mean a return to their repressive rules that denied girls education and women’s rights to work, and imposed harsh punishments.

In previous statements, the Taliban have said their vision of an Islamic government would allow girls to attend school, women to work or be in public life, but in every conversation they emphasized the need to follow Islamic injunctions without specifying what that would mean.

Meanwhile, President Ashraf Ghani on Wednesday at the inauguration ceremony of the Kamal Khan Dam in the western province of Nimroz referred to the US peace plan for Afghanistan and US Secretary Antony Blinken’s letter, saying: “Papers… rumors and plans are coming,” but Afghanistan will remain “independent.”

“We are not like a willow to shiver from every wind, papers are coming, rumors and plans are coming, but we are staying strong like a tree in its place,” said Ghani.

“The people are not ready to return to the past, today we are pursuing a clear policy of self-reliance, Afghanistan in the future shouldn’t think of opening the hand to beg,” said Ghani.

A proposed US draft plan for Afghan peace was recently shared with political leaders and outlines a roadmap toward an end to the violence and a structure for a future government.

The guiding principles for Afghanistan’s future, the structure of a transitional government, and a political roadmap for a lasting ceasefire are the three significant elements of the draft.

Also, Blinken in a letter to President Ghani put forth suggestions to the Afghan government to accelerate the peace process, including convening a UN-facilitated conference with international stakeholders, proposals to facilitate discussion between the two sides to form a negotiated settlement and ceasefire, a meeting in Turkey between both sides to finalize a peace agreement, and a revised proposal for a 90-day reduction in violence.