A proposed US draft plan for Afghan peace has been shared with political leaders and outlines a roadmap toward an end to the violence. 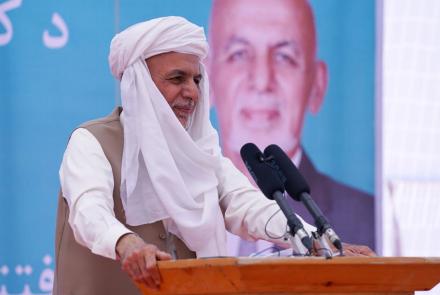 President Ashraf Ghani on Wednesday at the inauguration ceremony of the Kamal Khan Dam in the western province of Nimroz referred to the US peace plan for Afghanistan and US Secretary Antony Blinken’s letter, saying: “Papers… rumors and plans are coming,” but Afghanistan will remain “independent.”

“We are not like a willow to shiver from every wind, papers are coming, rumors and plans are coming, but we are staying strong like a tree in its place,” said Ghani.

“The people are not ready to return to the past, today we are pursuing a clear policy of self-reliance, Afghanistan in the future shouldn’t think of opening the hand to beg,” said Ghani.

The Taliban has said that they are still awaiting details of the upcoming talks in Turkey.

“Until now there is no solid and detailed information about this topic,” said Mohammad Naeem, a spokesman for the Taliban.

“If they (US) say that we are not going to leave or will not leave without conditions, of course there will be a big war with the Taliban,” said Mawlavi Qalamuddin, a former Taliban member.

But a member of the peace negotiating team representing the Islamic Republic of Afghanistan in the talks with the Taliban said that they are preparing for the upcoming meeting in Turkey.

A proposed US draft plan for Afghan peace was recently shared with political leaders and outlines a roadmap toward an end to the violence and a structure for a future government.

The guiding principles for Afghanistan’s future, the structure of a transitional government, and a political roadmap for a lasting ceasefire are the three significant elements of the draft.

Also, Blinken in a letter to President Ghani put forth suggestions to the Afghan government to accelerate the peace process, including convening a UN-facilitated conference with international stakeholders, proposals to facilitate discussion between the two sides to form a negotiated settlement and ceasefire, a meeting in Turkey between both sides to finalize a peace agreement, and a revised proposal for a 90-day reduction in violence.

However, along with these proposals, Blinken made clear that the United States is considering all options regarding Afghanistan, including the May 1st deadline for full withdrawal.

On Tuesday, the NATO Secretary-General Jens Stoltenberg, following the NATO ministerial in Brussels on Tuesday, said that the alliance sees that there is no “easy solution” in Afghanistan.

“We all see that there is no easy solution. There is no risk-free path ahead and we need to prepare for all options,” Stoltenberg said after the meeting.

The NATO chief said that the alliance’s foreign ministers emphasized their full support to all efforts to reinvigorate the peace process.

“Because a negotiated solution is the only way to achieve a sustainable peace, which prevents Afghanistan from again becoming a platform for international terrorism,” said Stoltenberg.

The NATO chief called on Afghan sides to take advantage of this opportunity for peace: “All sides must seize this historic opportunity without further delay and all regional and international actors must play their part to support a peaceful and stable Afghanistan.

NATO has around 10,000 troops in Afghanistan. The majority are from non-US Allies and partners.

Blinken earlier on Tuesday at a press conference in Brussels pledged to “rebuild and revitalize” the NATO military alliance and to share American plans of any possible withdrawal from Afghanistan.

Blinken said a review is underway by the US on Afghanistan and that he is in Brussels to share their initial findings with NATO allies.

He said conversations with allies over the next two days will cover a “broad agenda,” including NATO’s ongoing mission in Afghanistan.

Referring to a question on US plans for Afghanistan, he said: “We have a review underway in the United States. I am here in part to share some of our initial thinking with our NATO allies but maybe even more important, I am here to listen and consult because that is what allies do.”

“We went in together, we have adjusted together and when the time is right, we will leave together. There is a common theme or a common word, and that is ‘together,’” he said.

Meanwhile, sources told TOLOnews that President Ghani, in response to the US-proposed peace plan, said that he seeks a presidential election to be held in September.

Talks in Turkey are key opportunity

Deborah Lyons, UN Secretary-General’s Special Representative for Afghanistan, on Thursday said the upcoming Afghan peace talks in Turkey are an opportunity for the Afghan government and Taliban to reach terms on fundamental outstanding issues.

Deborah Lyons told the Security Council that after meeting with the parties in Doha, Qatar earlier this month, she heard of “real substantive progress” on key issues from the Taliban and Afghan government amid the ongoing talks.

She maintained the talks in Istanbul planned for April present an opportunity “to solidify the principles upon which the process will be based, and potentially lay the foundation for a just and inclusive settlement that would complement the ongoing negotiations in Doha.”

“These initiatives must, however, be focused and coherent. Above all they must reinforce, rather than undermine the Afghanistan peace negotiations underway now in Doha,” she said.

US Special Representative for Afghanistan Reconciliation Zalmay Khalilzad has confirmed that the Istanbul summit will be held in April.