A joint statement by Russia, China, the US and Pakistan following Thursday’s meeting calls for reduced violence and a negotiated settlement for peace. 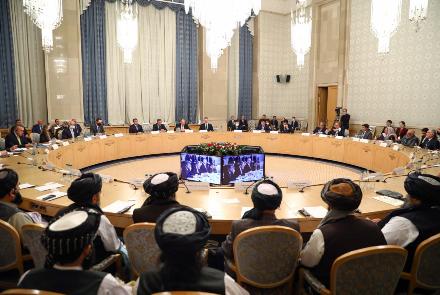 Following the Moscow conference on Afghan peace held on Thursday, a joint statement was issued in which the four primary representative countries–Russia, China, the US and Pakistan–stated that they would not support the return of the Islamic emirate system in Afghanistan.  The statement also recognized the will of the Afghan people for peace, called for a reduction in violence from all sides and for the Taliban to not launch a Spring offensive, and reiterated calls for a negotiated settlement for the conflict.

“As stated in the UNSC resolution 2513 (2020), we do not support the restoration of the Islamic Emirate and we call on the government of the Islamic and the High Council for National Reconciliation to engage openly with their Taliban counterparts regarding a negotiated settlement,” the statement said.

The joint statement also called on participants in the intra-Afghan negotiations to engage immediately in discussions on fundamental issues to resolve the conflict.

The statement called on the Afghan government and the Taliban to ensure that terrorist groups and individuals do not use Afghan soil to threaten the security of any other nation.

In the statement, the delegates also reaffirmed their commitment to the protection of the rights of all Afghans, including women, men, children, victims of war, and minorities.

“We call on all parties to the conflict in Afghanistan to reduce the level of violence in the country and on the Taliban to not to pursue a spring offensive, so as to avoid further casualties and to create an environment conducive to reaching a negotiated settlement,” according to the settlement.

The statement also called on the global community to contribute to building lasting peace in the country.

“We recognize and welcome all international efforts that are underway to facilitate and support a negotiated settlement as soon as possible,” said the statement.

Russian Foreign Minister Sergey Lavrov, during Thursday’s opening session of the Moscow talks on Afghan peace, said that despite the peace agreement between the US and the Taliban in Doha, the security situation has continued to deteriorate.

“Unfortunately, the Doha process for Afghan peace and reconciliation has not yet provided any positive results, but we expect further progress down the line. At the same time, we see that the situation is deteriorating,” said Lavrov.

“We are especially worried by the spring and summer period when traditionally we see more military and hostile activity in the region, and, according to my data and information, it is already starting, we see that people on both sides are continuing to perish, including the civilian population,” he said

“The Secretary-General has asked Mr. Arnault to assist in the achievement of a political solution to the conflict, working closely with the United Nations Assistance Mission in Afghanistan (UNAMA) and regional partners,” the UN statement read.

The statement said that Mr. Arnault brings over 30 years of experience in international diplomacy focusing on peace settlements and mediation, with an extensive background in United Nations missions in Africa, Asia, Europe, and Latin America, including Afghanistan.

In the latest attacks, four civilians were killed and 14 more were wounded after a bus carrying government employees was targeted by a blast in Kabul on Thursday morning.

This comes as five civilians, including four women – one of them pregnant – and a child were killed in an explosion in downtown Kabul that targeted a bus carrying employees of two government ministries on Monday afternoon.

At least 13 others, all civilians, were wounded in the explosion, according to officials.

Figures collected by TOLOnews show that 144 people have been killed and 214 others have been wounded in different security incidents in the last 18 days.

There was a rise in civilians killed and injured in Afghanistan following the start of peace negotiations in September, according to a report released by the UN Assistance Mission in Afghanistan (UNAMA) and the UN Human Rights Office on February.

The Afghanistan Protection of Civilians in Armed Conflict Annual Report 2020 documented civilian casualties in the last quarter of the year.

“2020 could have been the year of peace in Afghanistan. Instead, thousands of Afghan civilians perished due to the conflict,” said Deborah Lyons, the Special Representative of the Secretary-General for Afghanistan in the report.

The report said that for a seventh consecutive year, UNAMA documented more than 3,000 civilians killed in a single year, with Afghanistan remaining among the deadliest places in the world to be a civilian.

The report detailed the impact on Afghan women and children. “They make up 43 percent of all casualties: 30 percent were children and 13 percent women,” according to the report.

Afghanistan peace negotiations, which began between representatives of the Islamic Republic of Afghanistan and the Taliban in Qatar on September 12, “failed to alleviate the scale of civilian harm, a key indicator of violence levels. Instead, there was an escalation of violence with disturbing trends and consequences,” the report said.

The report said that the “anti-government elements (AGEs) in 2020 caused the majority of civilian casualties (62 percent), totaling 5,459 casualties – 1,885 killed and 3,574 injured with the Taliban responsible for most of these casualties (45 percent of the total) and Daesh responsible for 8 percent.”