The proposed UN-led conference on Afghan peace in Turkey may take place on March 27, sources close to the Taliban told TOLOnews on Wednesday. 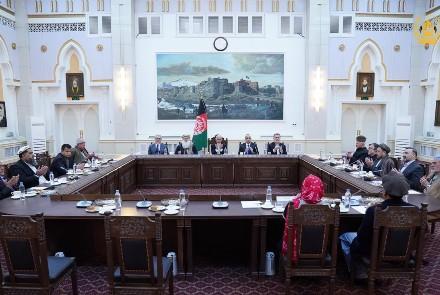 President Ashraf Ghani held a meeting at the Presidential Palace with key Afghan political leaders on Wednesday to discuss the peace process, particularly focusing on the latest peace plan proposed by the US. Sources who attended the meeting said on Thursday there was no broad agreement on a way forward.

According to the sources, consultation between the Afghan political leaders and President Ghani over the peace process will continue, particularly about a potential conference in Turkey.

The proposed UN-led conference on Afghan peace in Turkey may take place on March 27, sources close to the Taliban told TOLOnews on Wednesday, but US sources have not confirmed this date. The Afghan government has also not commented on the Turkey conference.

Turkey is ready to take part in mediation efforts for peace in Afghanistan and the region, the country’s ruling party spokesman said Tuesday, Anadolu Agency reported.

“The meeting focused on the overall security situation in the country, forming a national consensus and the continuity of consultations,” said Dawa Khan Menapal, deputy spokesman to President Ashraf Ghani.

This comes days after US Secretary of State Antony Blinken in a letter to President Ghani said that the political fragmentation and political disagreements in Afghanistan’s political sphere do not reflect Afghanistan’s powerful position.

The proposed UN-led conference on Afghan peace in Turkey may take place on March 27, sources close to the Taliban told TOLOnews on Wednesday.

In the meantime, David Martinon, the French Ambassador to Kabul has said that France will continue to “stay by” the Afghan people.

When asked about France’s participation in the Turkey conference, the French ambassador said that France has so far not received an invitation to participate at the conference.

“As far as I know, we haven’t received any invitation so far, but France will stand by our Afghan friends and we are ready to help in any case, in any way, if French presence in Turkey can be useful, then I guess, we will probably be around,” said French ambassador to Kabul David Martinon.

With the new peace plan being discussed, the future of the negotiations in Doha is uncertain, especially in view of the potential upcoming conference in Turkey.

“Regarding Ankara or any other initiatives, as I said before, any process that will support and speed up this process, we appreciate it, but in the meantime, let’s also keep in mind that we need to avoid a situation where we do not get much from Ankara and then we also hurt the process,” said Fawzia Koofi, a member of the peace negotiating team representing the Islamic Republic of Afghanistan in the talks with the Taliban.

Meanwhile, a trilateral meeting of Afghanistan, Pakistan and Britain was held in Bahrain with delegates from the three sides discussing a reduction in violence in Afghanistan.

“In the meetings being held between Pakistan and US officials, or between Afghan and Pakistani officials–like the one in Bahrain–one of the key points is the issue of a ceasefire. If you see the letter of the US secretary of state, in the letter, too, an emphasis was made on the ceasefire, as well as in the peace plan presented by Zalmay Khalilzad. One of the three main items was the ceasefire,” said Pakistani journalist Tahir Khan.