Taliban spokesman says effective implementation of the Doha agreement was discussed with the US envoy. 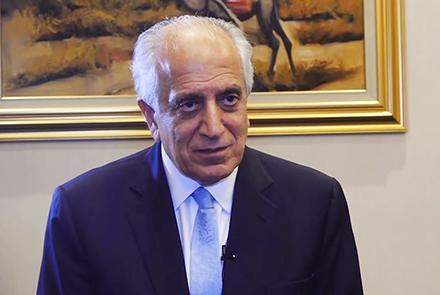 Zalmay Khalilzad, the US top envoy for Afghan peace, on Saturday met with Taliban negotiators in Qatar — for the first time under Biden administration — and discussed the implementation of the Doha agreement and the reconciliation efforts, according to Mohammad Naeem, a spokesman of the group.

But the Wall Street Journal has reported that the US envoy has proposed the idea of a grand conference of Afghan and Taliban leaders to create an interim government in Afghanistan.

They would replicate the format of the 2001 conference held in Bonn, Germany, which selected a leader for Afghanistan after the Taliban were ousted following the Sept. 11 attacks, The Wall Street Journal reported.

Prior his meeting with the Taliban delegates, Khalilzad met with the Republic negotiators who emphasized the need for an end to violence to move the peace process forward.

Hinting indirectly at plans for an interim or participatory government as part of the peace efforts, President Ghani on Saturday emphasized the importance of election as the only “unchanging principle” for the transfer of power.

“The transfer of power through elections is an unchanging principle for us,” Ghani reiterated. “We are ready to talk on a free, transparent and countrywide election under the management of the international community. We can discuss and agree about its date.”

Ghani asked the Taliban to prove their true intentions for peace in Afghanistan.

“Stop the violence, stop the slogans and prove it in action that you have a true intention for peace,” Ghani said during his speech at the parliament.

A Republic negotiator, Ghulam Farooq Majroh, said they will work on a plan that has been shared by the US envoy with the country’s politicians and the peace delegates in their upcoming meetings.

“There is a possibility that the plan will be shared with the other side (Taliban),” he said.

Afghan analysts and politicians said that if there is a plan, it should be implemented in a way that succeeds.

Former Afghan intelligence chief Rahmatullah Nabil said he fears that the plan will be brought in a way that could not help Afghans to reach a conclusion and another plan is brought to the table.

“And then say that an opportunity was given to you (Afghans)… And you do not have the capacity to agree on your major national issues and either accept this plan or you will deal with your war,” he said.

Officials from the High Council for National Reconciliation said the United Nations will be playing a key role in the peace process based on the new plan and that the regional and international players will unite their views about peace in Afghanistan under the UN watch.

“Khalilzad said we have talked with the international community, major powers and the United Nations about it. For instance, he said that there will be a bigger role for the UN in the potential meetings or conference,” a member of the council, Haji Din Mohammad, said.

This comes as violence remains high in the country despite peace efforts.