Khalilzad has met with influential political figures and Afghan government leaders over the future government. 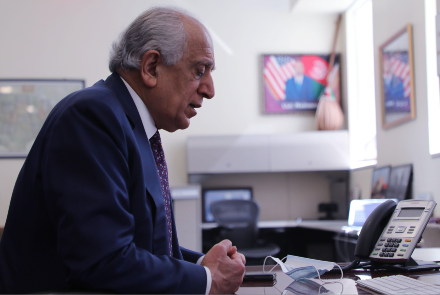 A US State Department official on condition of anonymity told TOLOnews on Wednesday that the United States has suggested an international conference on Afghanistan.

The US peace envoy for Afghanistan Zalmay Khalilzad during his three-day visit in Kabul has met with influential political figures and Afghan government leaders and discussed the establishment of a transitional period to move toward a future political structure, define the principles of the future system, and to hold a UN-hosted international conference on Afghanistan, according to the US official.

To highlight the key role of the United Nations, a special UN envoy for peace in Afghanistan is needed, according to the official.

Khalilzad will leave Kabul on Thursday for Doha to discuss the issue with the Taliban and to gauge their reaction, the official said.

Khalilzad reportedly discussed the formation of a participatory government in Afghanistan during his recent meetings with the Afghan political leaders in Kabul, including President Ashraf Ghani, sources familiar with the Afghan peace process said on Tuesday.

Sources close to former Afghan president Hamid Karzai and Abdullah Abdullah, the head of the High Council of National Reconciliation (HCNR), said that the US envoy handed them a draft of the participatory government plan and asked them to share their views as soon as possible.

According to the sources, the US envoy told the Afghan politicians that the peace talks in Doha will be sidelined and that a Bonn Conference-style meeting will be held at the international level to discuss the prospect of a participatory government that would include the Taliban.

“A grand international conference that will be similar to the Bonn Conference will be held, in which the Taliban and the republic side will participate at the leadership level. At the same time, the international community, including the United States and the regional countries, will reach a political agreement that will take its legitimacy from the international community. However, the national legitimacy (agreement of the potential conference) would take its authority from the traditional Loya Jirga,” said Shahzada Massoud, a close aide to former president Hamid Karzai.

“The participatory government would be similar to the government during Mr. Karzai’s tenure, which would not be effective—but it will be better than the current situation. One of its benefits is that the war will stop but let us pray that it will be a temporary option so that we think about a new plan for Afghanistan,” said Sayed Eshaq Gailani, a member of the HCNR.

“They should let the Afghans decide about the participatory government—such a govt should be determined according to the will of the Afghan people not at the demand of the Americans,” said Sayed Akbar Agha, a former Taliban commander.

The Presidential Palace has not commented so far, but President Ashraf Ghani has in the past rejected the prospect of an interim setup in the country.

Recently, Ghani said that the Taliban will not see an interim government in Afghanistan while he is alive.