Afghanistan Peace Campaign
Syed Zabiullah Langari
Tolo News
19 Feb 2021
German Chancellor said Germany is ready to stay longer in Afghanistan if it is in the interest of its allies. 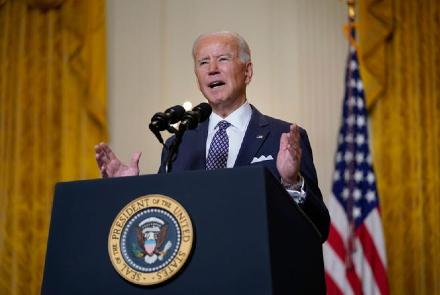 US President Joe Biden while addressing the Munich Security Conference on Friday said that the United States will work together with its allies in Europe and that his administration is fully committed to working with NATO allies on the way forward in Afghanistan.

“My administration strongly supports the diplomatic process that is underway and to bring an end to this war (Afghan war) that is closing out 20 years,” said Biden.

“I know the past few years have strained and tested our transatlantic relationship,” said Biden referring to US-Europe strategic alliance.

Biden said that the US is committed to make sure that threats are not posed against US and its allies from Afghanistan.

“We remain committed to ensuring that Afghanistan never again provides base for terrorist attacks against the United States and our partners and our interests,” he said.

Biden added that the US will not allow Daesh to reopen and regroup.

Biden said that while the US is assessing its troops posture around the world, but he has ordered a halt to troops pullout in Germany.

The ‘transatlantic alliance is back’, Biden said.

At the same event, German Chancellor Angela Merkel said that Germany is ready to stay longer in Afghanistan if it is in the interest of its allies.

This comes a day after NATO Defense Ministers concluded a two day meeting in Brussels with no final decision taken about troops pullout from Afghanistan.

NATO Secretary-General Jens Stoltenberg at end of the two NATO Defense Ministers meeting in Brussels on Thursday said that the military alliance will only leave Afghanistan when security conditions on the ground allow it.

Stoltenberg said that at this stage, the alliance has not made a final decision about a troop presence in Afghanistan.

“At this stage, we have made no final decision on the future of our presence, but, as the May 1 deadline is approaching, NATO Allies will continue to closely consult and coordinate in the coming weeks,” said Stoltenberg at a press conference in Brussels.

On February 29 last year, former US President Donald Trump struck a peace agreement with the Taliban under which Washington agreed foreign troops would leave Afghanistan by May 2021 in return for conditions including cutting ties with Al-Qaeda and opening peace talks with Afghan sides.

But President Joe Biden’s administration has said it would review the deal, with the Pentagon accusing the Taliban of not meeting their commitment to reduce violence as agreed in the Doha deal.

The Taliban in turn has accused the US of breaching the agreement and insisted it will continue its “fight” if foreign troops do not leave Afghanistan by May.

Earlier this month, a bipartisan study group assigned by US Congress called on President Joe Biden’s administration to slow the withdrawal of American troops from Afghanistan, remove the May 1 exit deadline and instead reduce the number of forces only as security conditions improve in the country.

The Taliban has said that such a move would have severe consequences and that Washington will be responsible for a future escalation.

The talks between the delegation representing the Islamic Republic of Afghanistan and the Taliban launched on September 12 of 2020, but progress has been slow and overshadowed by the high-level violence.

Biden Vows to Work Together with NATO on Afghanistan02.19.2021