Taliban movements have been reported in Kunduz, Baghlan, Uruzgan, Kandahar and Helmand provinces in recent weeks. 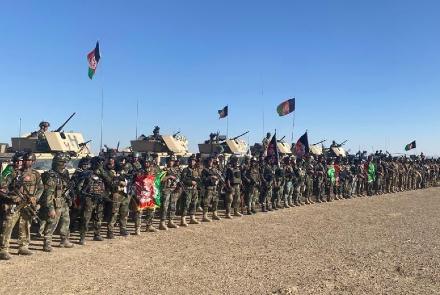 While the issue of peace with the Taliban this year has been among the hot topics in the country, there are reports that the warring parties are preparing for war in the spring.

Local officials in several provinces have confirmed that the Afghan National Security and Defense Forces (ANDSF) are making the fight against the Taliban among their main priorities.

The Taliban has so far not commented, but the Afghan Ministry of Defense (MoD) has said that the Taliban will face severe consequences if the group insists on war and violence.

Hangama is an Afghan girl who studies at class 7 in the restive province of northern Kunduz province.

Hangama has also lost her father in the war.

“Stop the war, we need peace, we need nationwide peace in Afghanistan so that we can continue our education,” she said.

“We can’t afford more than this, our house and all our belongings were destroyed, we are wondering where to go,” said Sayed Akbar, an internally displaced person in the Imam Sahib district of Kunduz.

“We relocated here, now the govt says that you must leave this place and we want to establish a military base here, we don’t know where to go,” said Mohammad Zahid, a resident of Imam Sahib district.

Local officials in Kunduz have confirmed that the government forces are preparing for summer offensive.

“Winter operations, the establishment of new installations—new security belts in the city and in the district were also established,” said Abdul Sattar Mirzakawal, the governor of Kunduz.

Taliban movements have been reported in Kunduz, Baghlan, Uruzgan, Kandahar and Helmand provinces in recent weeks.

The Taliban’s movements were seen in the highways and suburbs of provincial capitals.

Highways connecting Kabul to other provinces also witnessed the presence of the Taliban.

“There are around 19 policemen, 6 members of the army and 19 civilians,” said Akbar Barakzai, the governor of Baghlan.

“The resources and the power that we have is a threat to the enemies of the Afghan people,” said Farid Khan Sayedkheli, the commander of the 3rd division of 217 Pamir Army Corps.

The Afghan Ministry of Defense (MoD) has said that the Taliban, by not showing willingness for peace, will bring upon themselves a strong government response.

“If they continue the path of violence and war, this will be a great mistake, they will face a severe setback by the brave members of the country’s security and armed forces,” said Rohullah Ahmadzai, a spokesman for the Ministry of Defense.