An Afghan negotiator says international forces withdrawal in the absence of an agreement on peace will lead to a civil war. 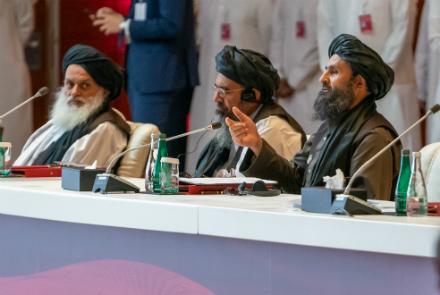 As the NATO defense ministers meeting comes to a close, the Taliban in a message to NATO leaders said the continuation of foreign forces’ presence in Afghanistan is neither in favor of the international organization nor does it benefit Afghans.

The Taliban has warned of consequences, and that the blame for future incidents will be on those who want to continue violence and continue a foreign presence in Afghanistan.

The NATO Defense Ministers are expected to meet at the end of this week where they will decide on the presence of international forces in Afghanistan and whether they will exit based on the May 1 deadline.

The Taliban has said that this year they did not announce their “spring offensive,” have not overrun major cities or districts’ centers and have refrained from complex attacks on cities, something that the group has called a “reduction in violence.”

“Our message to the upcoming NATO ministerial meeting is that the continuation of occupation and war is neither in your interest nor in the interest of your and our people,” the Taliban said.

But Mohammad Amin Ahmadi, an Afghan Republic negotiator who has recently returned from Qatar, said that the withdrawal of international troops from Afghanistan in the absence of an agreement on peace will lead to a civil war in the country.

US officials have said that Taliban violence remains high in the country, and insisted they will review former US president Donald Trump’s deal with the militant group.

“The violence is too high in Afghanistan. That’s the bottom line. And the Afghan people are suffering as a result and that’s the important thing, that’s what we’re focused on, that’s why we want to get to a political settlement to end this war in a responsible and sustainable way,” John Kerby, a spokesman for US Defense Department.

Not only the Taliban but US officials are also waiting for the decision of the NATO ministerial about international troops’ presence in the country.

“I wouldn’t get ahead of the ministerial and where it’s going, and I certainly won’t speak for our allies. I can just tell you that the secretary is looking forward to having that conversation with them and as he has said, in every conversation he has had with his counterparts, particularly his NATO counterparts, no decision that we make is going to be done without proper consolation and discussion with them and he very much looks forward to the ministerial meeting next week as another avenue to have that,” Kerby said.

This comes as the peace talks in Doha have been stopped for the last 28 days as both sides have held no meetings at the working group level to discuss the agenda of the negotiations.

“I think that the Taliban violence will intensify if the foreigners remain in Afghanistan,” said Faiz Mohammad Zaland, a university lecturer.