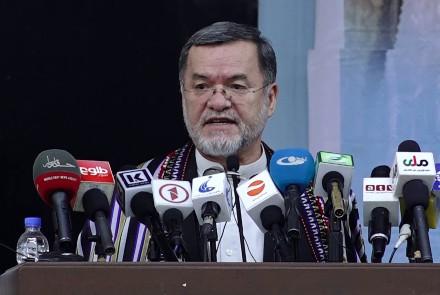 Second Vice President Mohammad Sarwar Danesh on Friday slammed the Taliban for the high level of violence and bringing up “new preconditions,” stressing the need for preserving the current political system in the country if the goal is to achieve enduring peace.

Addressing an event on the first death anniversary of Mohammad Baqir Mohaqiq, son of presidential adviser Mohammad Mohaqiq, Danesh said the peace negotiations between the Afghan Republic and the Taliban negotiators have stopped but stressed the government’s willingness to resume the talks that are aimed at finding a political settlement to the ongoing conflicts in Afghanistan.

The second vice president said the current opportunity for peace should be seized and that the Taliban has shown “less sincerity” to the reconciliation efforts and instead, they have increased their violence in the country.

Danesh said an interim setup will bring more violence in the country and that moving towards such a decision will mean returning to the past. He called on Afghan political leaders and the international community to deal with Afghanistan’s major issues with responsibility.

“The negotiations in Doha are faced with a type of stalemate,” Danesh said. “The Taliban representatives are busy on their political trips and sometimes they come up with new preconditions.”

Other politicians who addressed the gathering also slammed the Taliban for increasing violence in the country and said more efforts should be made for peace in the country.

Presidential adviser Mohammad Mohaqiq said the Taliban is preparing for a new season of war and that the government should also be ready for tough conflicts.

“There will be unprecedented fighting in the spring if peace efforts fail,” Mohaqiq added.

Former vice president Mohammad Karim Khalili said the current opportunity for peace is historic and that it should be seized by all parties to the conflict.

“The path of a continued war will never move the country towards prosperity,” said Khalili.

Former vice president Marshal Abdul Rashid Dostum meanwhile in a message blamed the Taliban for the continued bloodshed in the country.

“I have persistently asked the government to unite and take solid action against terrorism in order to overcome insecurity and other problems,” Dostum said in his message that was read by his spokesman at the event.

This comes a day after First Vice President Amrullah Saleh said that those Taliban prisoners who were released from the Afghan government jails as part of the US-Taliban peace deal are playing a major role in the rising security threat to the country.

Saleh added that he is ready to prove case-by-case that the released prisoners are involved in the current violence against the people.

“We are ready to prove case-by-case that the 5,500 Taliban prisoners that we released for peace–they are somehow involved in the surge in violence and murders of the people—this trust was blind and without a strategy, we will not repeat it again,” Saleh wrote on Facebook.

But the Taliban released a list of 30 of their freed prisoners, saying that they were either killed, arrested, or forced by the government forces to leave their areas.

Statistics collected by TOLOnews show that 270 people were killed and 347 more wounded in 214 explosions, attacks and shootings in January alone across the country.

Ghani last week also went to the residence of Abdullah Abdullah, the head of the High Council of National Reconciliation. 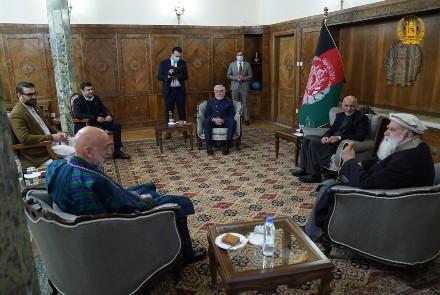 As debates and discussions over the possibility of an interim government persist, the Afghan government has also accelerated efforts to gain political support from mainstream politicians in the country.

Rahmatullah Nabil, the former head of Afghanistan’s intelligence agency—the National Directorate of Security (NDS)–who is also a critic of Ghani, has said that the president is politically isolated and is trying to gain the support of Afghanistan’s major political parties and political movements.

Ghani last week also went to the residence of Abdullah Abdullah, the head of the High Council of National Reconciliation.

“Nothing has been built behind the scenes to implement or impose it in a way on the people of Afghanistan,” said Abdullah.

“Over the past six years, the Arg (Presidential Palace) and Dr. Ashraf Ghani did not seek the views of the political leaders, then the situation reached a stage where discussions about an interim govt started…the government is now trying to show the new government in the US that they have the support of the Afghan people,” said Nabil.

“An Interim government means transformation towards the dissolution of the Constitution or a possible collapse (collapse of the political system) and chaos,” said Mohammad Mohaqiqi, senior adviser on political and security affairs of the president.

Salahuddin Rabbani, the head of the Jamiat-e-Islami party of Afghanistan and a main critic of Ghani, has not been met by the president so far. It is not clear whether the Palace has reached out to him or not.

“A guarantee for a stable government and the post-negotiations govt can be discussed,” said Waqif Hakimi, a member of Jamiat-e-Islami.

The Presidential Palace has not commented so far.

The Taliban have warned that if the US does not leave Afghanistan as per the Doha agreement in May, the next option for the group will be war. 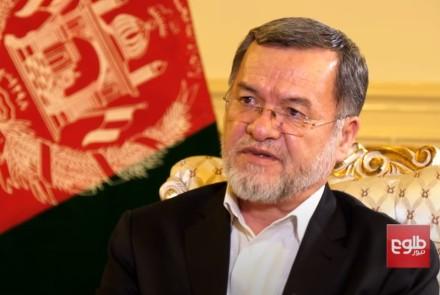 Afghanistan’s Second Vice President Mohammad Sarwar Danish on Wednesday said that the peace agreement between the United States and the Taliban was signed in a hasty way and there are no solid guarantees that the future of Afghanistan will be stable or the peace process will reach a conclusion.

In a meeting with the representative of the ICRC in Kabul, Danish warned that the Afghan peace process will face more challenges if the February 29 peace deal between the US and the Taliban in Doha is not reconsidered.

“If this agreement is not reviewed by the leadership of the United States, we will face severe problems in the future,” said Mohammad Hedayat, media adviser to VP Danish.

Meanwhile, Abdullah Abdullah, the head of the High Council of National Reconciliation (HCNR), said that there are no excuses to stop the peace negotiations.

“There are no reasons for one side of the negotiations to stop the talks,” said Abdullah Abdullah, the head of High Council of National Reconciliation.

Meanwhile, the Military Times has reported that the US military has gone a full year without a single combat death in Afghanistan for the first time in two decades of war.

Army Sgts.1st Class Javier Gutierrez and Antonio Rodriguez were the last two Americans to die while fighting in the country one year ago, the report said, adding that two others, Army Staff Sgt. Ian McLaughlin and Army Pfc. Miguel Villalon, were killed in January of last year.

The Taliban has said it may still target US military members if the Doha agreement is violated.

This comes as US National Security Adviser Jake Sullivan in a phone conversation with his Afghan counterpart Hamdullah Mohib on Jan. 22 said the Biden administration would review the Trump administration’s February 2020 US-Taliban agreement, the White House said in a press release.

“The US brought the war, but now they are living in peace, but the people (Afghans) are being killed on a daily basis in Kabul,” said Tahir Yarghal, a military analyst.

The Taliban have warned that if the US does not leave Afghanistan as per the Doha agreement in May, the next option for the group will be war.

“If they (US) says that we are not going to withdraw, of course, there will a fierce battle,” said Mawlavi Qalamduddin, a former Taliban commander.

“Today, the entire world is supporting us in the view of our commitments for peace, these efforts will continue,” said Ghulam Farooq Majroh, a member of the peace negotiating team, representing the Islamic Republic of Afghanistan in the talks with the Taliban.

Sources close to the Taliban have said that the unclear fate of the remaining Taliban prisoners, the groups presence on the UN blacklist, and also a lack of clarity in the US position about the Doha deal, are among the key factors causing the Taliban to boycott the talks with the Islamic Republic of Afghanistan in Doha.