MacKenzie says the US is taking a close look at the way forward in accordance with the February 2020 peace agreement. 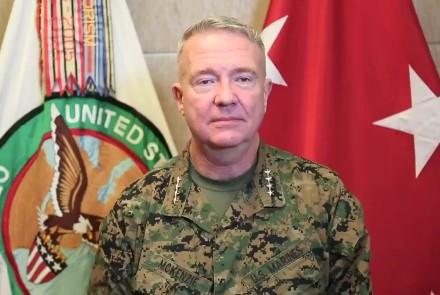 The commander of the United States Central Command, Gen. Kenneth McKenzie, says the level of violence in Afghanistan remains too high and that the US is reviewing the Taliban actions as well as the peace agreement to find a way forward in the near future, but he stressed that there has to be a conditions-based approach when it comes to the withdrawal of American troops from Afghanistan.

Speaking in an online conversation hosted by the Middle East Institute, McKenzie said: “The Taliban continue to resort to extreme violence and targeted killings across the country and frequent attacks on the Afghan forces. While they have mostly avoided attacks on US and coalition units, the level of violence is just simply too high and so that is an action that we look at.”

He said the US continues to watch Taliban actions and “I know the administration is taking a close look at the way forward in accordance with the February 2020 peace agreement.”

He said that some key elements to that plan require the Taliban to take action, but “we all agree that the best path is going to be a negotiated political settlement among the Afghans.”

“No one debates that essential point. However, you have to take a conditions-based approach,” he said.

He said that both sides “have got to show that they are willing to make the concessions that are going to be necessary to find a political path forward.”

Gen. McKenzie said that he remains concerned about the actions the Taliban have been taking up until this point.  He added that the new policy is under review and “we will have a way forward in the near future.”

He mentioned that since 9/11, the US strategic objective in Afghanistan remains to safeguard the homeland from attacks by terrorist groups, primarily al Qaeda and recently Daesh and preventing them from using Afghanistan as a base and safe haven.

“Success towards this objective would best be achieved through a negotiated settlement between the Taliban and the Islamic Republic of Afghanistan,” he reiterated.

The US general said that with the current force level in Afghanistan, US forces will “focus heavily on counterterrorism or CT operations while continuing to support the NATO-led Resolute Support mission.”

“While the ANDSF enabled by the Resolute Support mission continues to place pressure on the Taliban and VEO groups (violent extremist organizations), challenges remain,” he added.

This comes as Republican US Senator Lindsey Graham in an interview with CBS said that the American troops will not leave Afghanistan in May, supporting the Biden administration’s stance on Afghanistan and its bid to review the US-Taliban agreement.

“I’m very pleased with what the Biden administration is proposing for Afghanistan. We’re going to keep troops there on a conditions-based approach,” Graham said.

Asked if the US troops would leave Afghanistan after May, Graham said, “I think we’re not going to leave in May. We’re going to leave when the conditions are right. The Taliban have been cheating. They haven’t been complying. And so, I like what Secretary Blinken and the Biden administration is doing.”