NATO spokesperson says no decision has been made and NATO defense ministers will address Afghanistan at their February meeting. 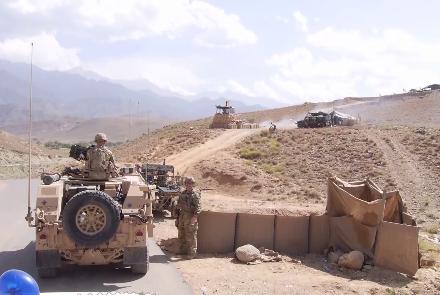 The Reuters report quoting anonymous sources saying international forces will stay in Afghanistan beyond the May deadline has drawn responses from official NATO spokespeople, analysts and the Taliban.

The Taliban said that they will continue “defending the country” if foreign forces remain beyond the May deadline that has been set up based on a deal the group signed with the United States last year.

Quoting four senior NATO officials, Reuters reported on Sunday that international troops plan to stay in Afghanistan beyond the May deadline envisaged by the Taliban’s deal with the United States.

The Taliban also reacted to a joint statement by the European Union and other Afghan allies, including the United States, calling for an end of violence, especially targeted attacks. The group said that the group will continue defending “the values, the soil, the country and their rights” if the US-Taliban deal is not implemented.

“If someone ignores the Doha agreement and seeks excuses to continue the war and extend the occupation, then the mujahid nation of Afghanistan can courageously defend the values, the soil, the country and their rights same as they have before, as proven in history,” Taliban spokesman Zabihullah Mujahid said in a statement.

Reacting to the report, NATO spokesperson Oana Lungescu said: “No decision has been made. NATO defense ministers will address Afghanistan at their meeting on February 17-18.”

“NATO fully supports the Afghanistan peace process, in order to ensure that Afghanistan is no longer a safe haven for terrorists that would attack our homelands,” she said.

“We continue to call on all sides to seize this historic opportunity for peace. The Taliban must respect their commitments to cut ties with terrorist groups, to reduce violence, and to engage in meaningful negotiations. Taliban violence continues to undermine the peace process, and it must end,” she said.

“I think these are unscripted comments. I think it was perhaps just an opinion. It was not meant to signify a decision. But I think also that there could be a goal of pressure in this case. Perhaps the NATO spokesperson wanted to pressure the Taliban–to essentially convey to the Taliban–that NATO is moving in a certain direction and that it is planning to keep troops in the country beyond May 1st and that the Taliban needs to prepare for that, or, secondly, perhaps the NATO spokesperson wanted to pressure the Biden administration,” said Michael Kugelman, Deputy Director and Senior Fellow, Woodrow Wilson Center.

“The international community and our strategic partners are committed to continuing their support to the Afghan forces,” said Rohullah Ahmadzai, spokesman for the Ministry of Defense.

The NATO spokesperson said that the mission of the organization remains unchanged.

“We continue to support the Afghan security forces in their fight against terrorism and to secure their country. Currently, the NATO-led Resolute Support Mission includes around 10,000 troops, a large majority of whom are non-US. No NATO Ally wants to stay in Afghanistan longer than necessary, but we have been clear that our presence remains conditions-based. Allies continue to assess the overall situation, and to consult on the way forward,” the spokesperson said.

“I think that their presence will continue war and the continuation of the war is neither in favor of the US nor in favor of any other side. Peace is required now,” said Mawlawi Abdul Salam Zaeef, an ambassador during the Taliban regime.

“I am in favor of negotiations and in favor of the international community’s support from a transparent process for settlement,” said Mohammad Mohaqiq, an adviser for President Ghani on security.

The Biden administration has said that it is reviewing the US-Taliban agreement, mainly the Taliban’s commitments to the Doha agreement.

The Taliban has had two trips over the last week to Iran and Russia where they met senior officials.

Iran’s Tasmin news agency has reported that the Iranian Foreign Minister Javad Zarif supported the establishment of an “inclusive Islamic government” in his meeting with the Taliban delegation, but the report was denied by Iran’s Foreign Ministry.

Iran’s foreign ministry spokesman Saeed Khatibzadeh said that Zarif said that he supports an all-inclusive government with the participation of all ethnic and political groups in Afghanistan.

“They (Taliban) started their trip because of the privileges provided to them by Trump has stopped,” said Mirwais Ghiasi, an international affairs analyst.

This comes as the second round of the peace negotiations in Doha that started on Jan. 6 has seen no progress over the last two weeks as the two sides have held no meeting to discuss the agenda during this period.