Peace negotiators said the decision was made as there is a need for more consolations on the agenda of the talks.

Negotiators in Doha on Saturday reported that both sides have exchanged their lists about the agenda of the peace negotiations and that the next phase of the talks will begin on January 5.

The negotiating teams of the Islamic Republic of Afghanistan and the Taliban earlier this month agreed on procedural rules for the talks. Following their agreement, they held three meetings on the agenda of the negotiations and were expected to start the talks this week.

The negotiators did not mention whether the talks will be convened in Doha or somewhere else.

“Both sides of intra-Afghan negotiations exchanged their preliminary list about the agenda of the talks. They also held preliminary discussions about this issue. In order to conduct more consultations, the two sides agreed to take a break from December 14 to January 5,” Taliban spokesman Mohammad Naeem said.

This comes hours after National Security Adviser Hamdullah Mohib said the next rounds of the peace negotiations between the teams of the Islamic Republic of Afghanistan and the Taliban should be conducted in Afghanistan, adding that the government does not have any consideration with any venue that is selected by the Taliban.

Mohib said the Afghan government is ready to hold talks with the Taliban in any part of the country that they suggest.

Nevertheless, Afghanistan’s Second Vice President Mohammad Sarwar Danesh on Saturday said that any political system including an Islamic emirate in which there is repression will prolong the war in Afghanistan under a different context.

Danish said that the Afghan people have serious concerns about their rights and civil liberties in the peace process.

He said the republic system, rights and liberties of the Afghans make the basic principles of the government.

Over 75 percent of the respondents have said the government should take ceasefire as a priority.

A survey by the Institute of War and Peace Studies (IWPS) shows that over 57 percent of surveyed Afghans are optimistic that the ongoing negotiations between the Afghan Republic and the Taliban teams in Doha will lead the country to a lasting peace.

According to IWPS, from 8,627 respondents, 58.1% are men and 4.9% are women. The survey respondents’ residence has been divided into two categories of rural and urban. The IWPS says 52.75 percent of the respondents are residents of rural areas while 47.25 percent live in urban areas.

The Afghan People’s Peace Perception Survey is a third its kind that shows 15 percent of the respondents have no hope about the ongoing talks in Doha.

The survey reveals that 74.24 percent of the respondents think that the level of violence in the country has not reduced since the start of the peace negotiations in Doha—on September 12.

Also, 63.63 percent of the respondents have rejected that the Taliban should lead and dictate comprehensive changes in the defense and security sector, the survey shows.

Meanwhile, 14.58 percent of the respondents have said that the level of violence has reduced in the country after the start of the talks in Doha.

The survey shows that 21 percent of the respondents believe that the government should not compromise on the achievements of the last two decades, including freedom of expression, women and minorities’ rights, political system and prosecution of war criminals.

The survey reveals that 63.63 percent of the respondents opposed any major change in the structure of the Afghan National Security and Defense Forces (ANDSF) while 22.24 percent said they are in favor of bringing change in these forces. 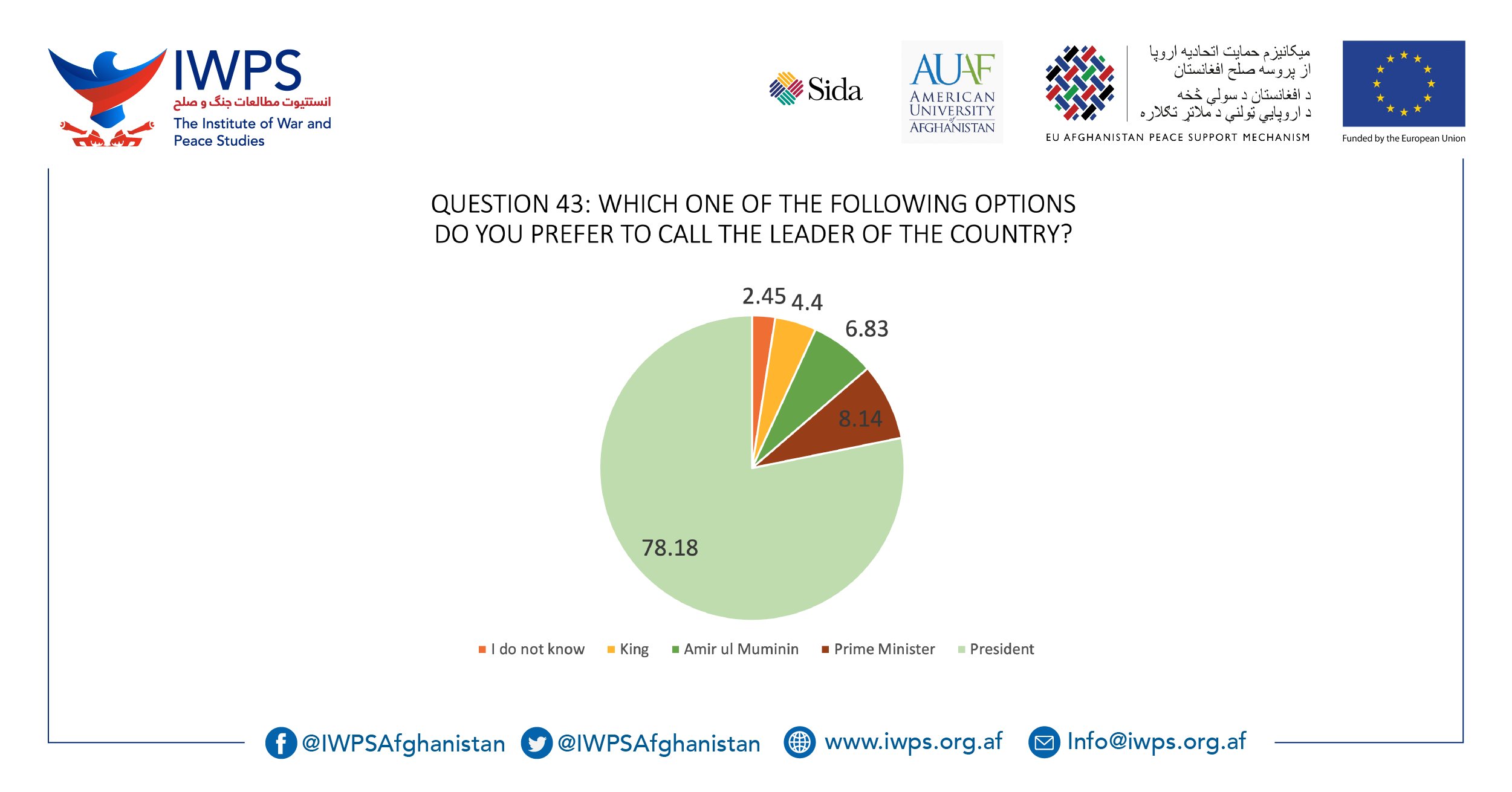 Addressing an event on the survey, Assadullah Saadati, the deputy head of the High Council of National Reconciliation (HCNR) said the Taliban’s opposition to human rights and the rights of the citizens of Afghanistan complicates the peace process and that they should change their ideology and accept the republic system.

“We want to take the peace narrative and peacebuilding from the elites to villages and towns of Afghanistan,” said Tamim Asey, director of the Institute of War and Peace Studies.

The survey shows that the respondents have described the role of Abdullah Abdullah, chairman of the High Council of National Reconciliation, as effective as the role of President Ashraf Ghani.

“The continuation of violence has not justification. It only poses threats to the peace process, creates mistrust on the process, and brings further suffering of the Afghan people,” said Sayed Saadat Mansour Nadery, the State Minister on Peace Affairs. 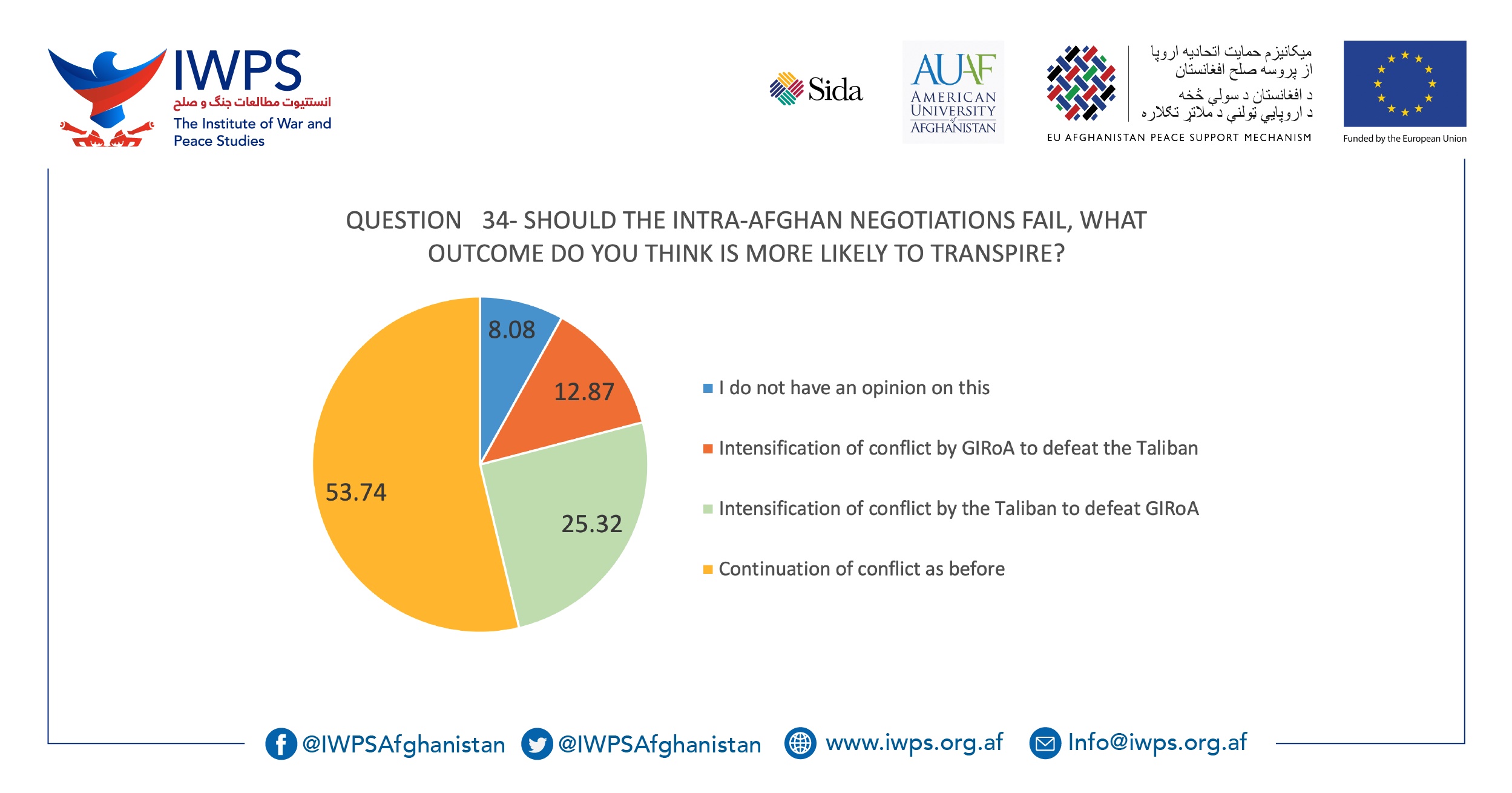 When asked, which authority should approve the outcomes and decisions in Doha negotiations, 27.43 percent of the respondents voted for the High Council of National Reconciliation, 27.4 percent said that the Afghan people through a referendum, and 16.22 percent said that they should be approved through a Loya Jirga, a grand council.

“We should realize that a lasting peace in Afghanistan is related to the scale of public support about peace,” said former MP Shahgul Rezaee.