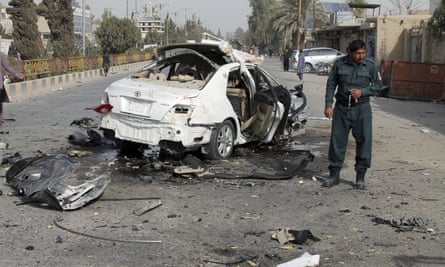 The Taliban have denied they are deliberately targeting journalists in attacks amid the surge in violence throughout Afghanistan.

The US watchdog Sigar (Special Inspector General for Afghanistan Reconstruction) says Taliban violence has risen by 50% since September, with media workers saying they don’t feel safe doing their jobs.

A spokesman for the Taliban told the Guardian they maintain a positive interaction with the media.

“By our policy, we give great importance to the work of journalists,” Muhammad Naeem said, adding that the Taliban have given access to journalists in areas under their control.

“Targeting civilians is not the policy of the Islamic emirate,” he said. 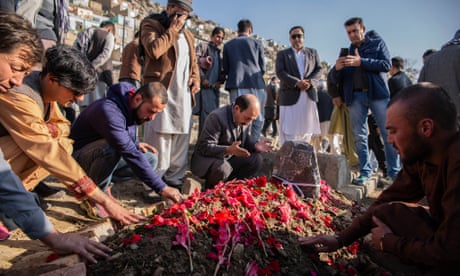 ‘We live in constant fear’: Kabul buries its dead after Isis attack on university

But as talks between the militants and the Afghan government slowly progress, Afghan media are worried for their future.

Last week reporter Elyas Dayee became the 50th journalist killed in the country since 2001, according to the Committee to Protect Journalists, when he was hit by a car bomb in Helmand province.

“A series of targeted killings of civilians has recently begun in Kabul, including attacks on mosque imams, university professors and educational institutions,” Naeem acknowledged, though denying Taliban involvement.

“This is part of an alarming pattern of increased threats and attacks on the media by the Taliban,” said Patricia Gossman, an HRW director, after Dayee’s murder. “This brutal killing of a journalist is nothing more than a cold-blooded execution and raises serious doubts about the protection of free expression in any peace deal with the Taliban.”

US troops are due to depart by May and Afghan journalists have told the Guardian they increasingly fear for their lives.

“I don’t feel safe in Lashkar Gah any more,” said Mohammad Omar Lemar, a freelance in Helmand. “I can’t live in a place where people are killed for no reason. I want to leave.”

Afghanistan has enjoyed significant press freedom since the US-led invasion in 2001, with newspapers and television channels mushrooming and journalists working freely.

In recent years the Taliban have started engaging with journalists regularly but Rahmatullah Amiri, a political analyst in Kabul, worries that press freedom could quickly be lost.

“There wouldn’t be any free press under the Taliban – they are strict and would heavily regulate media; we can already see this in areas they control,” he said.

Media workers across Afghanistan have received varying levels of security. Many are exposed at home, even if they work in heavily fortified compounds; others have been relocated – even sent overseas – but challenges continue.

“It’s more than a threat,” said Saad Mohseni, CEO of the Moby Group. “This strategy of intimidating, bullying and punishing members of the civil society has had a devastating impact. The Taliban send the message that they are the only ones able to provide safety. It’s a deliberate attempt to undermine the government and bully voices different to theirs.”

With the Taliban gaining momentum and Islamic State staging large-scale attacks, many Afghans have lost faith in their leaders’ ability to protect them. Journalists, too afraid to go public, keep quiet about the warnings they receive.

“All journalists are facing serious threats, but it is difficult – even impossible – for us to ensure safety while reporting,” said Anisa Shaheed of Tolonews, who was recognised for her courageous reporting by Reptorers Without Borders this summer.

“We live in a country at war; there is no way out,” she said. “Our families are concerned and ask us to leave our work, but this is our homeland. It’s our responsibility to inform, to work – whether we stay alive or are killed.”