Afghan analysts said there is a need for US pressure on the Taliban to move the peace process forward.

Weeks after President Donald Trump’s remarks that all US troops will be out of Afghanistan by the end of the year, a top US lawmaker said that there was no actual plan to withdraw troops by Christmas.

US House Armed Services Committee Chairman Adam Smith on Thursday echoed US officials, who have reportedly said they were not aware of the plan.

The US lawmaker said the military will continue a gradual pullout.

“I think the idea of bringing those numbers down as the president has done makes a lot of sense,” Smith said at a Center for New American Security webinar as quoted by Defense News. “Now, there’s been sort of a plan to do that, and there’s sort of been a tweet we should get out by Christmas. Well, there’s no plan to get out by Christmas, there’s just not. The White House hasn’t submitted one and the Pentagon doesn’t have one.”

Afghan analysts said there is a need for pressure by the US on the Taliban to move the peace process forward.

“The US should put pressure on the Taliban to get a result from the peace negotiations,” said Amir Mohammad Khaksar, a lawmaker.

“We should have been in an offensive status (against the Taliban). We should have captured the territories to press the Taliban to attend the negotiations table,” said Tamim Nuristani, a political analyst in Kabul.

Meanwhile, some women’s rights activists in a virtual meeting with UN Secretary General Antonio Guterres said the gains on women’s rights should not be sacrificed in the peace negotiations.

“The liberties we were given over the past 18 years, our presence in society and our presence in politics should be protected,” said Fazila Hoorzad, a women’s rights activist.

Sources familiar with the talks in Doha said on Friday that US special envoy Zalmay Khalilzad met with the Afghan republic and the Taliban negotiators this week.

The sources said that the State of Qatar, as a facilitator, has exchanged many recommended plans between the two teams to move the process forward.

The talks have delayed over two disputed points on its procedural rules: the religious basis for the negotiations and the connection of the US-Taliban deal with the talks.

Adviser: Trump tweet about Afghanistan withdrawal was a wish 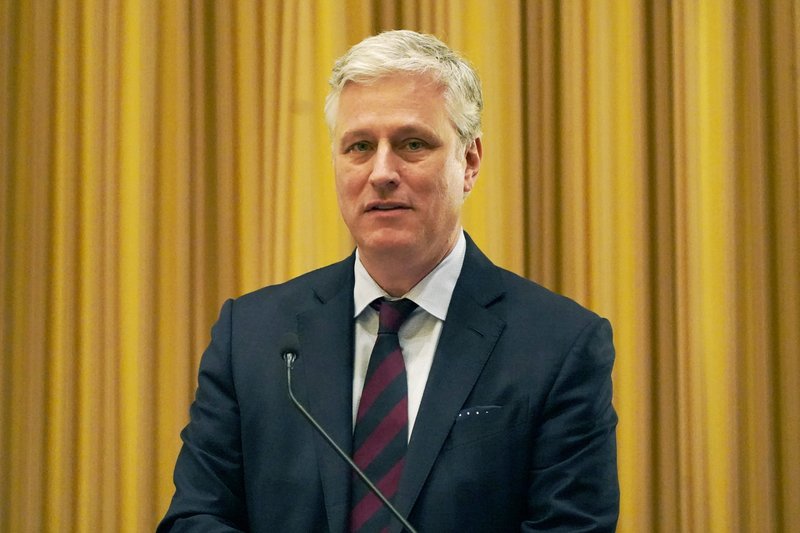 The White House national security adviser Robert O’Brien makes remarks at a national security summit Tuesday, Oct. 6, 2020, in Salt Lake City. O’Brien said the United States will not tolerate any election interference from foreign countries. O’Brien said he told his Russian counterpart, Nikolai Patrushev, to “stay out” of the November election and that there would be severe consequences for any country that violates that directive. (AP Photo/Rick Bowmer)

WASHINGTON (AP) — President Donald Trump’s national security adviser on Friday doubled down on his assertion that the number of U.S. troops in Afghanistan will shrink to 2,500 early next year, while suggesting that Trump’s tweet that all forces should be home by Christmas was more a wish than a reality.

Seeking to clarify a series of confusing statements about the American footprint in Afghanistan, Robert O’Brien appeared to take a shot at Gen. Mark Milley, chairman of the Joint Chiefs of Staff. Milley in recent days said that the U.S. is executing a plan to reduce the number of troops to 4,500 in November, but talk of any further reduction would be “speculation.”

Confusion about troop withdrawals from America’s longest war — an emotional topic for the troops and their families — began Oct. 7, when Trump tweeted that “we should have the small remaining number of our BRAVE Men and Women serving in Afghanistan home by Christmas.” When asked about those comments, O’Brien said Friday that Trump was just expressing a hope.

Instead, O’Brien said, “We’re on a path right now that looks like about 4,500 this fall and a smaller number in January and February, but if the conditions permitted, look we’d love to get people out earlier.” And, echoing comments he made last week, O’Brien said, “in the early part of next year, we’re going to be down to 2,500 troops.”

Defense officials insist there are no plans to have all troops home from Afghanistan by the holidays or the end of the year. U.S. officials also said Friday that there currently is no approved plan to reduce the number to 2,500 by early next year. The officials spoke on condition of anonymity to discuss internal deliberations.

Trump’s original tweet about Christmas alarmed Pentagon and State Department officials who fear that putting a definitive date on troop withdrawal could undercut negotiations to finalize ongoing peace negotiations between the Taliban and representatives of Afghan society, including the current Afghan government. They also worry that a hasty withdrawal could force the U.S. to leave behind sensitive military equipment. And they continue to stress that the Taliban have still not met requirements to reduce violence against the Afghans, a key element of the U.S. withdrawal plan.

When asked about the tweet and plans to go to 2,500 by early next year, Milley told National Public Radio several days ago that the Pentagon had a conditions-based plan for troop withdrawal. He said he would not speculate beyond saying that there are 5,000 to 6,000 U.S. troops in the country now and and that number is to be reduced to 4,500 in November.

“I think that Robert O’Brien or anyone else can speculate as they see fit,” Milley said. “I’m not going to engage in speculation. I’m going to engage in the rigorous analysis of the situation based on the conditions and the plans that I am aware of and my conversations with the president.”

He said the number of troops would be reduced to less than 5,000 in the next month or so, and in the early part of next year, it will drop to 2,500.

“I can guarantee you. … It’s not speculation. That’s the order of the commander in chief.”

Multiple U.S. officials said Friday that the Pentagon has not received an order to cut troops to 2,500. U.S. military leaders have consistently said that any reduction below 4,500 needs to be based on conditions on the ground, including a measurable reduction in attacks by the Taliban on Afghan troops. And they say they have not seen that yet.

America’s exit from Afghanistan after 19 years was laid out in a February agreement Washington reached with the Taliban. That agreement said U.S. troops would be out of Afghanistan in 18 months, provided the Taliban honored a commitment to fight terrorist groups, with most attention seemingly focused on the Islamic State group’s affiliate in the country.

U.S. officials also say that the U.S. has critical classified equipment at bases in Afghanistan that needs to be moved out, which will take time. They also said that troop withdrawals from Afghanistan need to be coordinated with other coalition allies that also have forces there.