Afghan politician Fawzia Koofi says the assassination attempt will not dampen her resolve to fight for women’s rights.

Fawzia Koofi, an Afghan politician who fights for women’s rights, has been recuperating in a Kabul hospital, where doctors told her the wound she sustained in an assassination attempt two weeks ago will take some more time to heal.

Koofi, a member of the negotiation team representing the Afghan government and leader of the Movement for Change political party, was expected to participate in the so-called intra-Afghan talks scheduled to be held in the Qatari capital, Doha.

The good thing is that they did not chase our car up to Kabul, I think because they probably thought I was dead.

Confined at the Kabul hospital, Koofi is worried that her mission to fight for women’s rights in the war-torn country will be affected.

The vocal Afghan politician had come face-to-face with Taliban representatives at an unofficial intra-Afghan gathering in 2019, asking them the “definition of hijab”.

“Because, during the Taliban time, women were beaten for not wearing a burqa [veil],” she had said back then.

‘They thought I was dead’

Koofi says she wants to make sure to attend peace negotiations with the Taliban, but her bullet wound is still fresh.

On August 14, while travelling to the capital city from Kalakan, a district on the northern outskirts of Kabul, she was fired at by unidentified gunmen.

Koofi told Al Jazeera while she was travelling along with her 20-year-old daughter, two black cars followed and soon blocked her vehicle. An unidentified person from the other car fired two shots at Koofi, injuring her upper right arm and shoulder.

The second shot was missed and hit the side of the car.

“My driver managed to escape the area and sped as fast as he could as gunmen continued to shoot at our car. I was shocked but I soon realised my right shoulder was bleeding and I could not move my hand,” Koofi said.

“The good thing is that they did not chase our car up to Kabul, I think because they probably thought I was dead.”

Koofi believed she would not survive the attack as she lost a lot of blood on the one-hour journey to the Kabul hospital. Her daughter ensured she did not close her eyes.
Mullah Abdul Ghani Baradar, the leader of the Taliban delegation, and Zalmay Khalilzad, US envoy for peace in Afghanistan, shake hands after signing an agreement in Doha [File: Ibraheem al Omari/Reuters]

The assassination attempt drew nationwide condemnation with Afghan President Ashraf Ghani calling the attack “cowardly” and many on social media calling for an investigation into the attack.

‘Why did they attack me?’

Koofi launched a political campaign called “back to school” to promote girls’ education after the fall of the Taliban regime in 2001. Four years later, she won her seat in Parliament.

She has railed against the Taliban and other groups against the fundamental rights of women that has angered conservative elements of Afghan society. 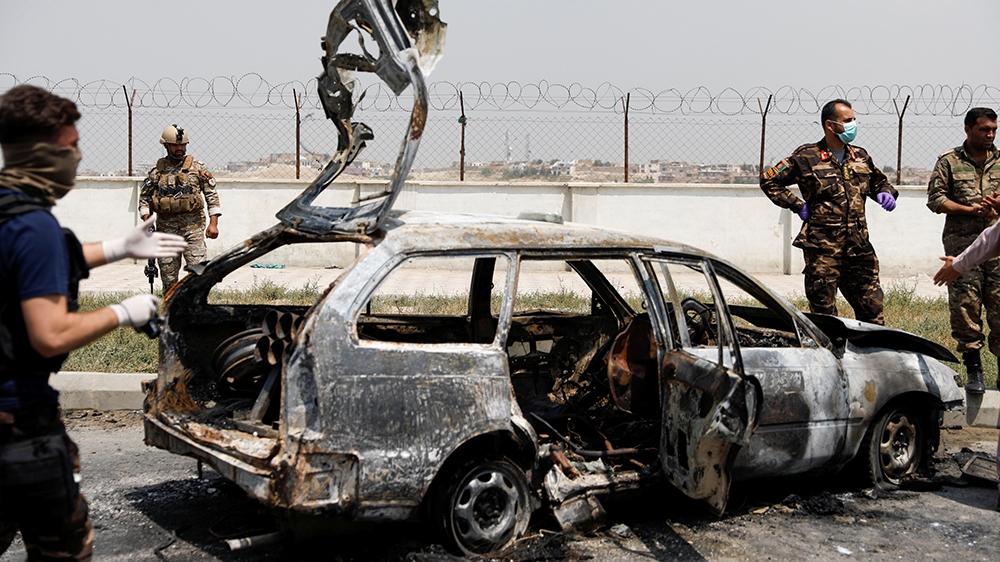 Violence has not abated despite the February deal between the Taliban and the US [File: Mohammad Ismail/Reuters]

As the US-Taliban negotiations began in 2018, the armed group has given vague comments on adopting a less strict stance towards women than during their five-year rule during which women were banned from attending school, employment, political participation or even leaving their homes without a male family member.

“We give women all rights whether in terms of rights of education and work on the basis of Islamic rules,” a Taliban spokesman, Sohail Shaheen, told Al Jazeera in an interview last year.

Koofi, who has a master’s degree from the Geneva School of Diplomacy, has relentlessly been working to make sure women were able to achieve their dreams and aspirations in the war-torn country, but is also aware that it comes at a price.

However, after the assassination attempt on her, Koofi has asked why she was attacked and deserved to die.

“What did I do wrong? Why do they want to kill me? I have done positive and good things for this country. Why would someone become this cruel that they have spent money on this operation to kill me,” she said.

“I have not done anything wrong to anyone, I have only tried to help people in need.”

No group has claimed responsibility and the Taliban denied involvement in the attack.

‘I will not stop’

Peace negotiations between the Afghan government and the Taliban are likely to start in Doha next week, Abdullah Abdullah, chairman of the High Council for National Reconciliation, said at an event of the Institute of War and Peace Studies on Thursday. Though the Taliban has contradicted Abdullah’s claim on the date of the talks.

The intra-Afghan talks have been delayed over the prisoner swap deal between the Taliban and the Afghan government.

As per the deal Washington, signed with the Taliban in February, the Afghan government was to release 5,000 Taliban prisoners and the Taliban was to free 1,000 government and military men it held.

So far, the Afghan government has released more than 4,500 Taliban prisoners, but has refused to free the remaining saying they face heinous crimes.

The first round of talks was scheduled to happen earlier this month when a traditional grand council, or Loya Jirga, approved the immediate release of a final group of 400 Taliban prisoners in government custody.

But since the decision of the Loya Jirga on August 10, only 80 prisoners have been released so far. Meanwhile, Australia and France had officially asked Kabul not to let out Taliban prisoners convicted of killing their citizens.

The Afghan government also recently demanded the Taliban free 22 commandos in its custody before they free the remaining Taliban prisoners.

But as the delay in talks potentially hinders the peace process, there has been a rise in attacks on rights activists in recent months in an attempt, experts say, to intimidate members of civil society away from participating in the talks.

In less than week after the assassination attempt on Koofi, Abdul Baqi Amin, director of the Scientific Council of the Ministry of Education, was killed by an explosive device that was placed in his car in Kabul. Amin was part of the Afghan delegation which took part in several high-level meetings with the Taliban in Doha where they discussed points on the reduction in violence and women’s rights.

In June, Natasha Fatima Khalil, a member of Afghanistan’s Independent Human Rights Commission, was killed in a blast. The death of the 24-year-old human rights activists drew widespread social media reaction. Many said a voice for peace was silenced.

As Koofi is part of the negotiation team, she hopes the talks begin soon. “The country cannot afford to lose any more of the promising youth with dreams and aspirations,” she said.

Despite her injury, Koofi said she will continue to ask challenging questions and participate in the peace process to ensure women are not sidelined.

“If there are talks about a peaceful prosperous situation in our country, no one can exclude women from it. I am with the people of Afghanistan, women have to be vocal and strict when it comes to preserving the rights of women.

“I will make sure the priority will be womens rights to education, social political participations, holding jobs among others on the agenda of the talks.

“Let’s face it, the fact that women are being attacked is a true indication of how vulnerable we are in this society,” she told Al Jazeera from the Kabul hospital.