PUBLISHED DAILY BY THE LOWY INSTITUTE

In a country familiar with tragedy, the pandemic is met witha dose of nonchalance. But the numbers keep going up. 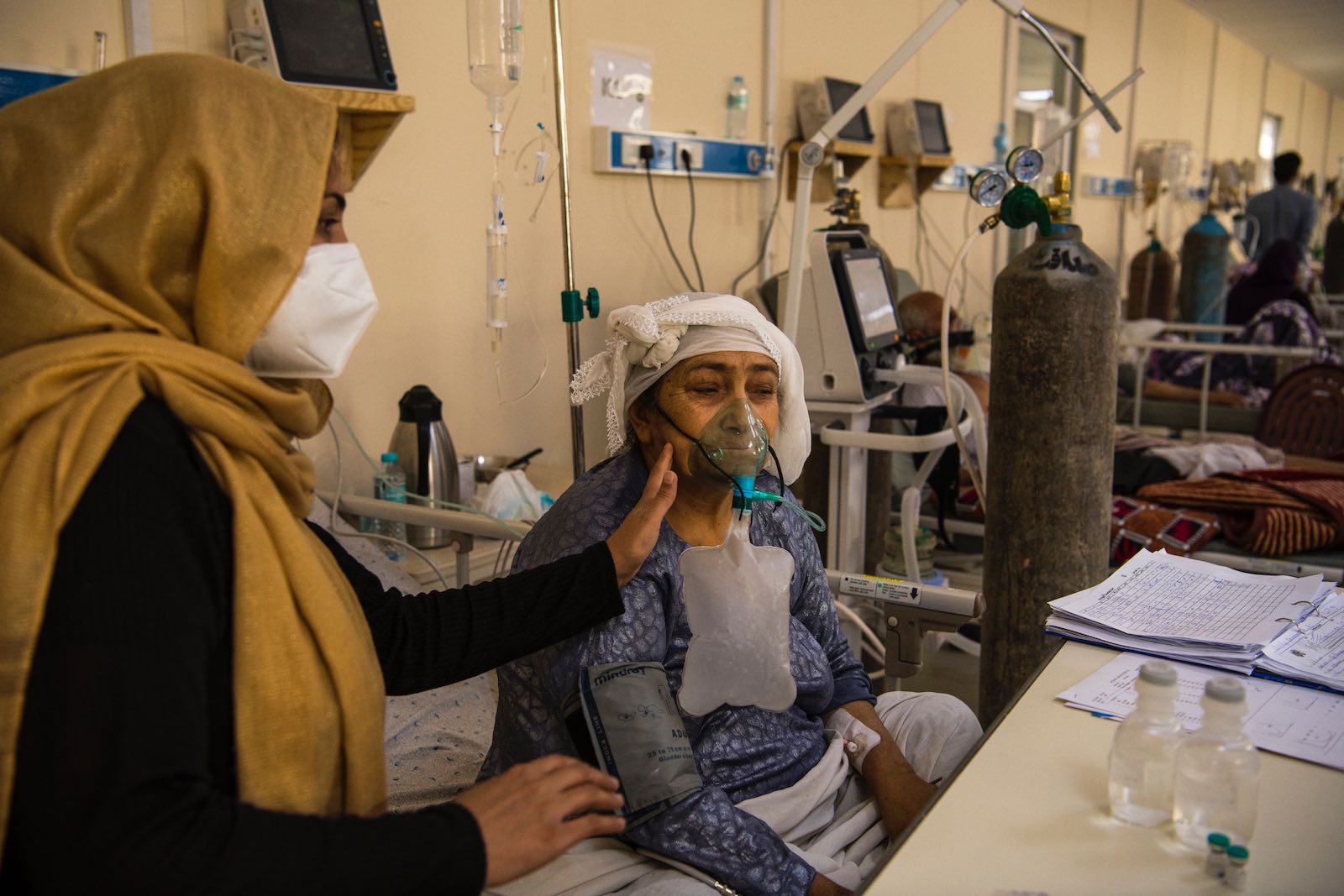 Roya, 55, in the ICU of the Afghan Japan Communicable Diseases Hospital in Kabul
The most striking thing about the top Covid-19 treatment facility in Afghanistan is the lack of basic measures preventing the spread of Covid-19.

At the Afghan Japan Communicable Disease Hospital in Kabul last week, security guards at the gate were maskless. So too a taxi driver delivering an elderly woman with a dry cough who was too weak to leave the car herself. Even the hospital’s newly appointed director, Dr Ahmad Zahir Sultani, wore his mask slung beneath his chin, and of the dozen or so nurses and hospital staff who came seeking signatures while we spoke in his office, only one wore a mask.

Last week, Afghanistan’s health minister, Ahmad Jawad Osmani, stated that nearly a third of Afghanistan’s population – or roughly 10 million people – have been infected with the coronavirus. The figure was based on a survey, supported, he said, by the World Health Organisation and Johns Hopkins University, which indicated that in Kabul, more than half of its 5 million residents are believed to have been infected.

Afghanistan’s health system was critically weak even before the pandemic hit. Since then, only 90,000 coronavirus tests have been conducted, with 37,000 returning positive results. But testing capacity isn’t the only problem; for serious cases, there are only 300 ventilators available, countrywide, some of which are going unused because staff have not been trained to use them. Another 32, it has been alleged, were stolen from the Ministry of Public Health (MoPH) and smuggled to Pakistan. At the Afghan Japan hospital last month, Sultani said shortages in oxygen saw patients’ families fighting for tanks when delivery trucks arrived. Medical workers in the western city of Herat claimed they hadn’t been paid by the government in three months, while the MoPH has been accused of embezzling millions of dollars pledged by international donors for the coronavirus response.

With widespread poverty and no welfare system to support them, the vast majority of Afghans cannot afford to follow the kind of behavioural change that has been effective in containing outbreaks elsewhere around the world. This is perhaps the greatest challenge facing public health officials in Afghanistan. Religious beliefs that overrule medical advice and a cultural inclination to fatalism also contribute to an approach to dealing with the threat of the coronavirus that is pragmatic at best and submissive at worst.

The first positive cases of coronavirus were recorded in the western city of Herat in February. An explosion of infections in neighbouring Iran saw more than 200,000 Afghan migrant workers streaming back across the border in March. At least some brought the coronavirus with them. The workers piled into crowded buses and vans in Herat and dispersed across the country, rejoining the large, multigenerational households they had left to support in the first place. Infections were soon detected in all 34 provinces.

During a rare Taliban photo-op aimed at promoting the group’s public health bona fides, the temperature gun wielded by one fighter turned out to be two blocks of wood bound together with white electrical tape.

Officially, a total of 1300 Covid-related deaths have been recorded across Afghanistan. But most who’ve succumbed to the virus likely never sought treatment at all and don’t figure in official statistics. Last week, only 40 of the Afghan Japan Hospital’s 100 beds were occupied. Most people, says Sultani, “become sick in the night and die [at home].”

Many Afghans with symptoms prefer to wait out the illness rather than risk a visit to the hospital and a long wait for results. Others, according to Sultani, avoid treatment altogether, fearing that if they die their bodies will be taken away and deprived of a proper Islamic burial. In rural areas, where access to information and healthcare is limited and rates of education are low, public health advice is largely ignored.

Because of the low testing capacity, members of the public and journalists alike have taken to using anecdotal indicators for measuring infection and death rates. Social media users blame unusually high numbers of deaths announced by Facebook friends and their extended families on Covid-19. The Washington Post reported in June that senior security officials from four provinces estimated a 60–90% infection rate among their forces. A Kabul gravedigger was reported saying that before the pandemic he was burying seven or eight people per day but that now that figure had risen to more like 20.

Compared to many countries, the Afghan government was quick with containment measures. In late March, although only a few dozen cases had been recorded, schools, universities, government offices and all non-essential businesses in Kabul and provincial capitals were ordered shut, domestic airlines grounded and road travel restricted.

But few Afghans could afford to stop working, even as infection rates increased. A spokesperson for the World Food Program (WFP) in Afghanistan told me in May that “44% of all Afghans – more than 16 million people – rely on unsustainable livelihoods that will be disrupted by the shocks due to the outbreak of Covid-19.”

The same month, Parvathy Ramaswami, WFP’s Deputy Country Director in Afghanistan, said the situation was “quickly turning from a health emergency to a food and livelihood crisis”:

In cities, the lockdowns and reduced economic activities leave the most vulnerable families like urban poor, communities in protracted displacement and all those relying on casual labour for survival not knowing where their next meal will come from.

In July, at the launch of a national aid distribution program, President Ashraf Ghani said that 90% of Afghans were now living on US$2 (A$2.80) or less per day.

The country itself, according to the World Bank’s latest Global Economic Prospects report, will experience an economic contraction of 5.5% of GDP this year.

The majority of Afghans have confronted the coronavirus with the fatalism they have adopted through the ebb and flow of more than 40 years of war.

But the continuing economic downturn belies the fact that by June, aside from the ongoing closure of schools and universities and bans on large public gatherings, early containment measures were all but forgotten. The risk of succumbing to poverty, as experts had predicted, was greater than that posed by the coronavirus.

In Kabul, the street hawkers who began selling surgical masks and gloves when fear of the pandemic took hold in March went back to selling knock-off sunglasses and mobile phone accessories. Temperature checks at supermarkets, government offices and on domestic flights are perfunctory. Most times I’ve been tested, the devices (presumably faulty or counterfeit) gave readings that suggest I’m clinically dead. During a rare Taliban photo-op aimed at promoting the insurgent group’s public health bona fides, the temperature gun wielded by one fighter turned out to be two blocks of wood bound together with white electrical tape.

The majority of Afghans have confronted the coronavirus with the fatalism they have adopted through the ebb and flow of more than 40 years of war. Sultani says, “Afghans have experienced so much hardship in the past” that they aren’t so worried about a disease, no matter how much experts sound warnings. That, he says, and the belief that their fate is ultimately “the will of God”.

In June, I visited the provincial hospital in the capital of Wardak Province, an hour’s drive from Kabul. Amin, an Intensive Care Unit nurse, told me the hospital was admitting less than half the number of patients compared to before the pandemic. “People are afraid to come,” he said. After being tested, those with symptoms are encouraged to admit themselves to a quarantine ward established by the Swedish Committee for Afghanistan a short drive away. Of the 50- to 60-year-olds checking in there, he said, “none of them are surviving. By the time we get their results, they’re dead.” The results, he told me, take up to a week to come back from Kabul, so aside from critical patients, most simply return to their villages, spreading the virus further into Wardak’s valleys.

At a frontline security checkpoint a couple of kilometres down the highway, where at least one member of the Afghan National Police was shot and killed by a Taliban sniper since my visit, the commander, Haji Lal Mohammad, told me that 20 or his 30 men had shown coronavirus symptoms but that few had bothered being tested. One who had tested positive, and was still complaining of symptoms, arrived as I spoke with the men around the edge of a woven plastic carpet over cups of customary green tea. He made his way around the group, shaking hands with each of his comrades. “Don’t worry,” he said, “[Corona is] not so bad in Afghanistan.”

Before taking me on a tour of the Afghan Japan hospital last week, Sultani, the director, told me that, even when visiting the Intensive Care Unit, “I only wear a mask, no gloves”. The ICU is a long room with a row of 12 beds containing patients with the most severe cases, many of whom were gasping for breath through oxygen masks. Citing optimistic cancer patients who recover, and pessimistic ones who do not, Sultani said, “I believe that when a person’s confidence is high, they have less chance of becoming sick.” When morale is low, he reasoned, “the immune system suffers, and you are at greater risk of contracting disease”.

When I questioned the efficacy of confidence as a prophylactic, he said, “I’ve been here for 20 or 25 days, and I still haven’t become sick. I’m doing this to maintain morale among the doctors and staff, to be strong, not to be afraid.”